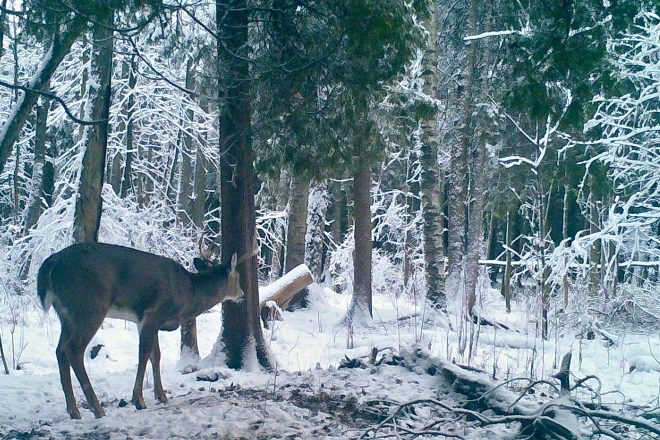 If you have an open gun buck tag, you can try to fill it during the muzzleloader season, now through Dec. 8. The bow and crossbow seasons are also ongoing, but all hunters (except those after waterfowl) need to wear blaze-orange clothing through Dec. 12, the last day of a four-day antlerless gun deer hunt here. Blaze orange is also needed Dec. 24 – Jan. 1 during the holiday antlerless deer gun season. Trail-camera photo courtesy of Kevin Naze.

The rise in the popularity of crossbows looks to be driving a big decline in recent gun deer harvests, including a 7.9% drop in the nine-day season statewide this year. Preliminary figures showed 84,952 bucks and 90,715 antlerless, for a total of 175,667.

Although the Department of Natural Resources (DNR) touted a 9.3% increase in the gun deer kill in the Northern Forest – the only one of the state’s four management zones to show an increase – the northern gun buck harvest was still down 11.4% from the five-year average.

It remains to be seen whether the DNR or the state Natural Resources Board will make any moves to try to return the firearm hunt to its former glory, or accept a continuing slide in licenses sold.

The trend of falling gun licenses is not a good one for a November tradition that is the highlight of deer hunting’s billion-dollar economic impact. Just 564,440 gun, Conservation Patron and Sports licenses were sold – down from a record high of 699,275 in 1990 and more than 70,000 fewer since crossbows were allowed for all in 2014.

The discovery of chronic wasting disease following the 2001 season and the resulting fear factor fueled by a questionable story in a Milwaukee newspaper – one insinuating that several hunters may have died from eating venison at a wild game feed – saw the largest drop in license sales ever: more than 100,000 fewer sold in 2002, including nearly 70,000 fewer gun licenses.

As more information came in, tens of thousands of gun hunters returned. The biggest sustained drop has been since the crossbow inclusion. Prior to 2014, only those ages 65 and older and hunters with disabilities could use them.

Since mid-September, more than 270,000 deer have been killed in Wisconsin, including about 145,000 bucks. Heading into the gun hunt, crossbow users had reported nearly 54,000 whitetails, and archers nearly 36,000. Most of the remainder were taken during the youth and disabled gun hunts in October.

Nearly two dozen snowy owl sightings have been reported during the past week, many of them along the water near Oconto, Green Bay, Sturgeon Bay and Kewaunee.

Thousands of tundra swans are migrating through the state. The Mississippi River has been a hot spot, but swans have been seen – and more often heard high overhead – in our area, too.

Big numbers of diving ducks and Canada geese are still in the area, along with plenty of mallards. Sandhill cranes were still seen here during the past week, though many have headed south.

Report your finds, and find out what others are seeing at ebird.org/wi/home. To learn more about snowy owls, visit

New Wisconsin State Park annual admission stickers are now on sale, and they’re valid from the date of purchase through Dec. 31, 2022. The DNR recommends purchasing stickers by Dec. 10 if purchasers are interested in receiving them in time for Christmas gift-giving.

Resident and nonresident stickers are available online at yourpassnow.com/ParkPass/wi, as well as at individual state parks and forest properties through drive-up window service, from self-registration kiosks or by phone. Learn more at dnr.wisconsin.gov/topic/parks/admission.

The National Shooting Sports Foundation said that the FBI’s National Instant Criminal Background Check System (NICS) processed 687,788 background checks during the week leading up to and including Black Friday.

The year has been shaping up to be the second-strongest year for firearm sales on record, second only to 2020’s record-breaking number of 21 million background checks for a firearm sale.