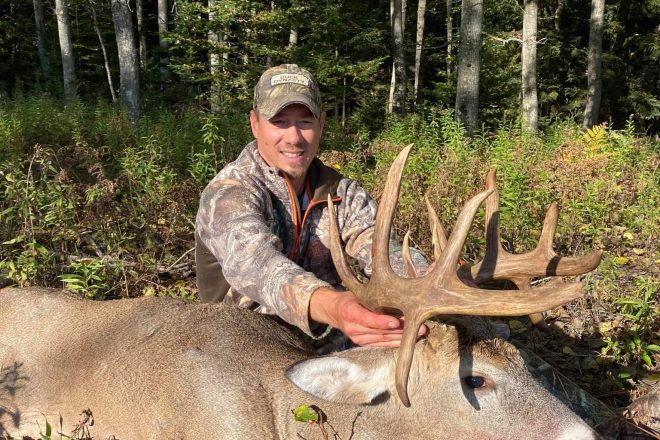 Pictures of mature whitetail bucks are appearing with increasing regularity on social media these days as the annual rut, or mating season, heats up. Though the peak tends to occur during the first two to three weeks of November, pre-rut activity can be very strong from mid-October on. Now’s the time to try a light rattling sequence, a grunt call, or even a decoy to trigger an aggressive response from a seasoned whitetail.

Door and Kewaunee County hunters were closing in on 500 deer registered earlier this week – a number that’ll start climbing quickly as more take to the woods during the coming weeks.

The increase in deer activity also means more vehicle/deer collisions. Drivers must be on high alert from dusk to dawn especially.

Two of the many bucks seen on Facebook this week were a 12-pointer taken from public land in Door County by Kristopher Smith of Stevens Point, and a dandy 10-point from private land in Oneida County by Will Haase of Algoma.

If you have a big-buck or first-deer tale – or outdoor news or comments of any kind – email [email protected].

The Department of Natural Resources has wrapped up its collection of Chinook salmon eggs at Strawberry Creek and has turned its attention to coho salmon and brown trout at the Besadny Anadromous Fisheries Facility on the Kewaunee River. Data on well over 3,000 salmon was taken at Strawberry Creek, and more than 2 million eggs were collected from about 400 of the healthiest-looking females.

Low water reduced the number of salmon making it past the gauntlet of anglers below the refuge on the Kewaunee River, but more than 1,000 fish – a mix of Chinooks and cohos – had been sorted through last week. On Oct. 13, a four-person crew from the Indiana Department of Natural Resources was at Besadny to collect Chinook eggs for its stocking needs. They also got some from Michigan to ensure they had enough to meet their goals for 2022.

Anglers trying to legally hook salmon should focus their attention in areas that aren’t swarming with visitors wading through the shallows, intent on hooking a fish one way or another. That might mean getting out at dawn or working lesser-known, out-of-the-way spots.

Lower stretches of the Ahnapee and Kewaunee Rivers are solid bets for fresh-run cohos and browns, along with the occasional steelhead. Some northern Door harbors are also good spots to cast for browns. Try spawn under a bobber by day or glow spoons at night. There’s no night fishing allowed inland from the Lake Michigan shoreline this time of year to reduce illegal activity.

Elsewhere, the unseasonably mild weather during the first three weeks of October has allowed boating anglers some excellent conditions to target perch, pike, bass, walleyes and even muskies on Green Bay.

Love him or loathe him, avid hunter and aging rocker Ted Nugent – he’ll be 73 later this year – undoubtedly knows a thing or two about promotion and politics.

As a national spokesperson for Hunter Nation, Nugent was in Madison last week to kick off a Republican legislative initiative known as the Wisconsin Sporting Freedom Package: a series of bills seeking to remove some restrictions and increase opportunities for hunters, anglers and shooters.

“Hunting is essential, and any regulation that doesn’t deal with safety or science-based wildlife management is an obstacle to participation,” Nugent said.

One of the bills that’s raising the most opposition is for hunting sandhill cranes. Even if it were to pass – and it’ll be an uphill battle in a state that’s home to the International Crane Foundation – it would be a very limited hunt, with applications and permit numbers designed for sustainability.

Another bill that’s been getting plenty of online opposition is one to eliminate separate hunt periods for wild turkeys in the spring and reduce the number of zones from seven to two.

You can check out what else Nugent and others had to say during the Oct. 13 news conference at wiseye.org/2021/10/13/news-conference-gop-legislators-briefing-with-ted-nugent.

As of Oct. 15, Lake Michigan was down an inch during the past month and 13 inches since last October. Levels are still high, however: 18 inches above the 100-year average and 48 inches above the all-time monthly low, set in 1964.