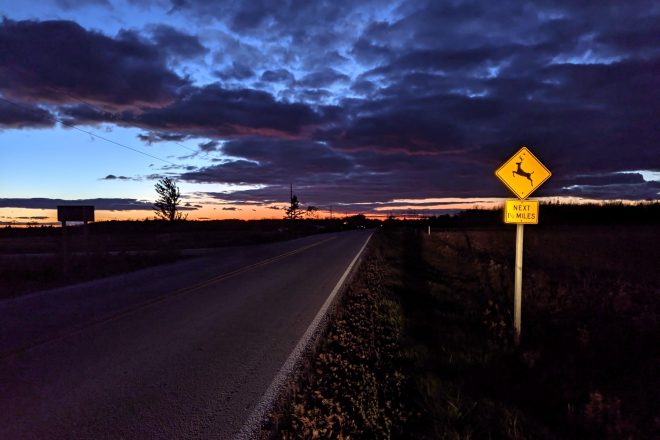 Signs remind motorists to remain vigilant while driving in areas where deer are likely to cross the road, but whitetails can show up just about anywhere during the annual fall mating season. Most accidents happen around dusk and dawn, but with bucks tailing antlerless deer day and night, vehicle strikes can occur at any hour. Photo by Kevin Naze.

There’s no better time to spot mature bucks than during the November whitetail breeding season. That’s exciting if you’re an archer or crossbow hunter with an open tag, but it’s far less so if you’re just trying to get somewhere safely on a rural roadway.

Vehicle-deer collisions always peak during the first few weeks of November, but Door and Kewaunee County hunters have been doing their part to reduce crashes, combining to register more than 1,000 deer through the end of October.

Gun deer hunters who haven’t already done so should be finalizing stand preparations, sighting in firearms and purchasing licenses. Last year, nearly 60% of licenses were purchased online. Female hunters made up the fastest-growing demographic: up 12%, at more than 92,000 licenses purchased.

• In 2020, there were nine shooting injuries, one of them fatal, during the November gun deer hunt. Four took place in deer drives; three were self-inflicted, including the fatality; and two were other accidental shootings. The 10-year average for hunter shooting incidents is 6.8. In 2019, there were four firearm-involved injuries and zero fatalities.

• Hunters should register their deer by 5 pm the day after harvest online or by phone at 844.426.3734. Those who forget to act within the time frame should still complete the process to provide the most accurate data possible.

• First Harvest and First Experience certificates can be printed at dnr.wi.gov/fhc.

• The Deer Hunter Wildlife Survey is open until Jan. 9 at dnr.wisconsin.gov/topic/WildlifeHabitat/wlsurvey.html.

Outdoors enthusiast Dan Small is in his 31st year hosting Deer Hunt Wisconsin on public television. This year’s show premieres Nov. 11, 8:30 pm, and repeats Nov. 12, 12:30 am; Nov. 13, 10:30 am; and Nov. 14, 1 am. Small will also be a guest on the Larry Meiller Show, heard on the Ideas Network of Wisconsin Public Radio, on Nov. 10, 11:45 am. Updates and segment previews will be posted at facebook.com/deerhuntwi and youtube.com/deerhuntwisconsin.

The DNR announced Tuesday that largemouth bass virus has been confirmed in 14 smallmouth bass collected in Door County waters in September. Fish collected had skin wounds that appeared red and ulcerated, and they varied in size and location. These lesions often had a cream-colored layer of dead tissue in the center of the wound.

Since 2008, smallmouth bass displaying similar skin lesions have been sampled during several outbreaks in Lake Michigan and Green Bay waters. Although test results from fish sampled during those episodes had been inconclusive, the virus was detected in all 14 of the diseased fish sampled this year.

Largemouth bass virus has been found throughout the eastern United States and previously identified in Wisconsin’s Mississippi River Basin. The virus can cause weakness, abnormal swimming, swimbladder overinflation, reddening and death in largemouth bass populations.

Little is known definitively about its ability to cause disease or death in smallmouth bass.

The two-year Forestville Flowage drawdown ended last month, and by mid-October, the 65-acre pond was stocked with more than 2,300 small largemouth bass (about three inches each) from a DNR hatchery in Jackson County, as well as 47,000-plus fingerling bluegills from the U.S. Fish and Wildlife Service’s National Fish Hatchery in Genoa, Wisconsin.
Although it’ll take about four years for the fish to grow to a size that some anglers will keep (about six inches for bluegills and 14 inches for bass), some larger predators and panfish that survived the drawdown in the upper Ahnapee River could move into the flowage.

Some fishers have also been known to try to speed things along by catching perch and other species from Green Bay and releasing them, but that practice is illegal.

The state Natural Resources Board unanimously approved continuing an increased whitefish quota allocation for commercial fishers in southern Green Bay during its Oct. 27 meeting in Madison.

Meanwhile, the DNR is seeking public comments on the economic impact of the proposed permanent rule relating to whitefish commercial harvest in Lake Michigan (including Green Bay) until Nov. 11.

The rule would also create a new restricted area for trap nets set for whitefish in southern Green Bay and require commercial fishers to report the location and name of trap nets set for whitefish. Daily electronic harvest reporting for all Lake Michigan and Lake Superior commercial fishers would be required as well, making reporting quicker and more accurate than biweekly paper reporting.

More information on the proposed rule is available on the DNR website. Email comments by Nov. 11 to [email protected].

As of Oct. 29, Lake Michigan was still 16 inches above its 100-year monthly average, but down 15 inches from last October. Water levels fell an inch during the past month and were 25 inches below the all-time monthly high, set in 1986.