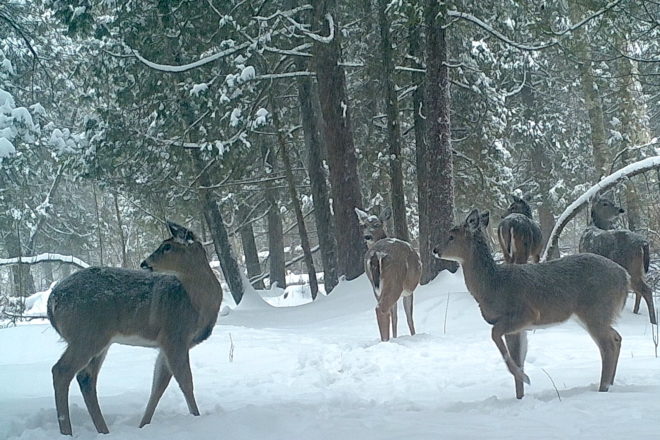 A group of antlerless deer scanned the forest for potential danger while searching for something to eat. Much of the snow has since melted, but colder temperatures are expected to return – and stick around. Light snow is possible this weekend. Trail-cam photo courtesy of Kevin Naze.

If you haven’t had to hit the brakes lately while driving at night in deer country, you might want to thank a hunter.

As of Dec. 13, Door and Kewaunee County bow, crossbow and gun deer hunters had combined to trim more than 6,300 whitetails from the landscape. That means fewer run-ins with vehicles and less damage to crops and forests.

The bow and crossbow deer seasons are open. Next up will be a nine-day, antlerless-only holiday gun deer hunt Dec. 24-Jan. 1, followed by an extended bow and crossbow hunt in Door and Kewaunee counties through Jan. 31.

Door, Kewaunee, Brown and Manitowoc counties are among just 14 counties in Wisconsin where feeding deer year-round and baiting during hunting seasons remains legal after yet another fenced game-farm deer tested positive for chronic wasting disease (CWD).

The detection in Eau Claire County was within 10 miles of the Clark and Jackson county borders. Current state law requires that the Department of Natural Resources (DNR) enact a ban on feeding and baiting of deer in counties or portions of counties within a 10-mile radius of a farm-raised or free-roaming domestic or wild animal that tests positive for CWD. As a result, the DNR will renew the baiting and feeding ban in Eau Claire County for three years and enact two-year baiting and feeding bans in Jackson and Clark counties effective Dec. 13, 2021.

The best science says that a shared food source has the potential to unnaturally congregate deer, where sick deer may leave infectious prions in their saliva and urine. Those opposed to government bans say deer naturally congregate wherever they feed, be it in farm fields, food plots, water sources or under apple and oak trees. Some hunters – especially those with sub-par deer habitat – use baited sites to attract whitetails to properties where they can hunt.

In addition to those already named, other counties where baiting and feeding are currently legal are Douglas, Ashland, Bayfield, Iron, Sawyer, Rusk, Price, Lincoln, St. Croix and Pierce.

The U.S. Department of Agriculture (USDA) will administer the funds through cooperative agreements. The bill also includes authorization for the USDA and state and tribal agencies to develop educational materials to inform the public about CWD and directs the USDA to review its herd-certification program within 18 months of the bill’s passage.

If the bill advances through the Senate, it’ll go to President Biden.

The state’s Natural Resources Board received an update on the Lake Michigan and Green Bay commercial-fishing study during its Dec. 8 meeting.

Brad Eggold, the DNR’s Great Lakes District fisheries supervisor, did a good job of laying out the data, and Door County commercial angler Charlie Henriksen provided comments. In a nutshell – although there has been much concern and research is ongoing – there was very little bycatch in the whitefish trap net and gill net fishery.

The commercial-fishing issue will come before the board as an action item at next month’s meeting. Eggold’s presentation is archived as a webcast on the DNR’s YouTube channel.

The DNR’s 2022 Public Access Lands Atlas is now available for purchase from the University of Wisconsin Bookstore for $89.95. If you don’t want the entire 446-page publication, you can download free county maps and more, or launch the atlas’s online mapping application at dnr.wisconsin.gov/topic/fl/RealEstate/PAL.

As of Dec. 10, Lake Michigan had fallen 19 inches during the past 12 months, including four since early November. Water levels were still 13 inches above the 100-year monthly average, but 23 inches below the December record from 1986. Water levels are 42 inches higher than they were in December of 2012, the all-time monthly low.