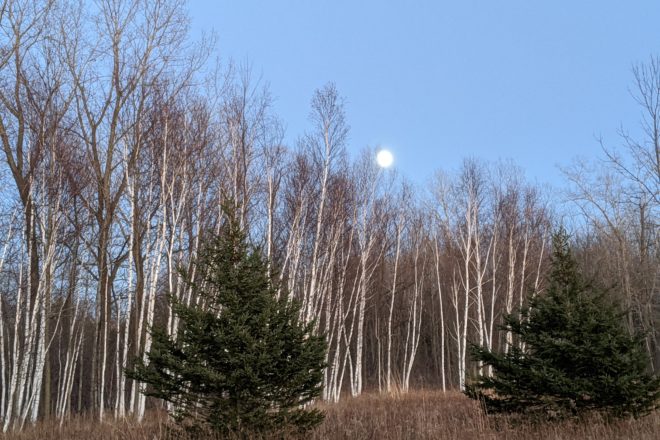 Moonrise in Southern Door on Nov. 28. Photo by Kevin Naze.

A slower-than-expected gun deer hunt in Door County was still a good one, with more than 2,000 whitetails taken.

Door County’s drop was the biggest among the 35-county Central Farmland Region opening weekend, which overall saw a 4.2 percent increase in bucks and a 3 percent rise in antlerless registrations.

Most years, about half of the season’s harvest is taken opening weekend. Part of the early decrease could be attributed to a record start to the combined bow season – crossbow and archery – including more than 1,200 deer (812 bucks) in Door County and more than 900 (585 bucks) in Kewaunee County.

The 61,625 bucks that fell to broadhead-tipped arrows and bolts are 7,000-plus more than bow and crossbow hunters registered by the end of last season, which was the previous record. Along with 7,469 deer harvested during the youth gun hunt in October, the total kill prior to the gun hunt stood at more than 110,000.

Crossbows were once allowed only for hunters with disabilities and those 65 and older. When they were allowed for anyone beginning in 2014, one of the stipulations was that the season length could be adjusted if necessary.

The state’s Natural Resources Board took a look last year, and no changes were made. Is it time to look again?

Wisconsin’s traditional gun deer season, even in its decline, is still the state’s top draw. Through the end of the nine-day gun hunt last year, 564,664 licenses were sold – the fewest in more than 40 years.

Some of that lost revenue has been made up in crossbow license sales, but as crossbow use soars, archery license sales drop. Both are somewhere in the neighborhood of 200,000, but it’s a fuzzy number because the DNR allows Conservation Patron holders to use both – without asking them which they’ll be using – and cheap “upgrades” are available so that hunters may use either during the season.

Should the crossbow season be shortened? Should the bow and crossbow seasons end the Sunday prior to the gun deer opener, then resume only after the firearm hunts are over? Send your thoughts to [email protected]

County Deer Advisory Councils (CDAC) will begin the process to establish a three-year goal to try to increase, decrease or maintain deer numbers in their areas through meetings that are all virtual this year, including the Dec. 7 Door County meeting and the Dec. 16 Kewaunee County meeting.

Members of the public may weigh in prior to these meetings at dnr.wisconsin.gov/topic/Hunt/cdac, and there will also be a comment period in early January before final objectives are set. Recommendations will go to the state’s Natural Resources Board on Feb. 24.

The deadline to apply for a black bear harvest permit or preference point for the 2021 season is Dec. 10. There are now six zones, so check the new map before making your choice.

• The longest-running citizen-science survey in the world – Audubon’s Christmas Bird Count – will run its 121st annual count Dec. 14 – Jan. 5. Each count is held on a single day in an established, 15-mile-diameter circle. Wisconsin hosts more than 100 counts, including in the Brussels, Dyckesville, Ephraim, Kewaunee, Sturgeon Bay and Washington Island areas. Learn more at audubon.org, wsobirds.org or ebird.org/wi.

• Project FeederWatch (feederwatch.org) – a popular cold-weather birding activity across the United States and Canada – is now underway through April 9. First-time participants can receive a bird-identification poster, and there’s a BirdSpotter photo contest featuring a new challenge every two weeks.

• Big Game Records Live is the next generation of Boone and Crockett Club’s Trophy Search (B&C, boone-crockett.org), providing searchable access to B&C’s entire database of accepted trophies for all species.

• The 2021 State Fish-Art Contest (StateFishArt.org) is open to students in kindergarten through 12th grade in four categories.