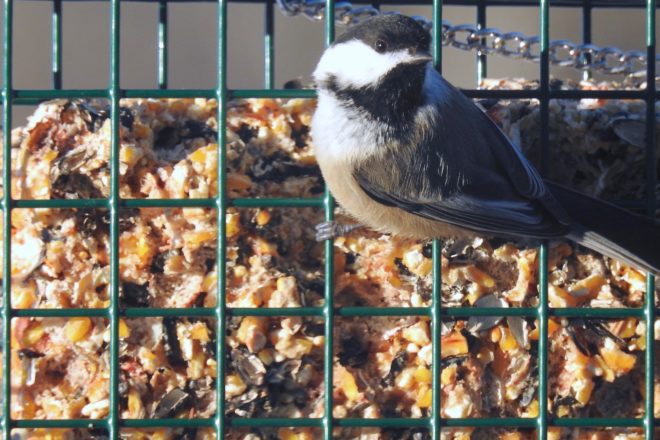 Colder weather and snow mean backyard bird feeders can be busy places. Black oil sunflower seeds and suet cakes will attract a wide variety of winter residents, such as this black-capped chickadee. Photo by Kevin Naze.

Frigid air during the opening weekend of the gun deer hunt last month had anglers thinking this might finally be a year with an early start to the ice-fishing season, but even the most optimistic hard-water fanatics sighed as early ice melted away during a series of warm days in late November and early December.

Fast forward to this weekend. Weather forecasters are saying it’ll be the beginning of an extended period of air that’s cold enough to make ice, including several days next week with lows in the single digits and highs only in the teens.

But early anglers who are eager to test the waters will need to be patient. With water temperatures still in the upper 30s earlier this week, even the quiet backwaters of Little Sturgeon and protected bays, harbors and marinas will take some time to acquire more than dangerously thin skins.

The wind will play a big role in just how fast things firm up as well, and Green Bay is notorious for big waves and strong currents this time of year.

Parents and guardians should be vigilant during the holiday break, reminding kids to steer clear of the temptation to walk on freezing water – falls through thin ice or into open water can turn tragic quickly.

Safety experts recommend waiting until there are at least three to four inches of new, clear ice before walking on it. In larger systems such as Sturgeon Bay and Green Bay, keep in mind that what could be decent ice in one area might be only an inch thick a short walk away.

Early explorers shouldn’t go out alone. Always test the thickness with hard strikes from an ice chisel, and stay away from creek mouths, narrows, shallow reefs and other areas with currents that can thin ice. It’s also a good idea to carry safety gear such as ice picks, a cell phone in a waterproof bag or case, a length of rope and a life jacket.

To get more information about staying safe on the ice, including thickness recommendations for various types of activities, visit dnr.wisconsin.gov.

Wisconsin deer hunters have registered more than 320,000 whitetails so far this fall, including more than 8,000 antlerless deer during the recent four-day gun hunt and more than 7,000 deer – about 3,000 of them antlered bucks – during the 10-day muzzleloader hunt.

Through Dec. 11, Door County hunters had reported 3,591 deer, including 1,719 bucks. That included a preliminary count of 48 (14 bucks) during the muzzleloader season and 73 antlerless during the four-day doe hunt.

Kewaunee County hunters were at 2,672, including 1,180 bucks. The preliminary muzzleloader season count was 47 (17 bucks), and the four-day antlerless total was 55.

The biggest harvest increases this season were in the Central and Northern Forest Zones, prompting some hunters to wonder whether the 2021 wolf harvest played a key role.

There were at least 288 wolves killed: 218 during the Feb. 22-24, 2021, season and 70 more removed by federal trappers near farms with chronic wolf depredation.

There were 59 wolves legally removed from Douglas County in 2021, 15 during the February season and 44 more in depredation situations. Yet Douglas County’s 13.5% increase over last year and 1.5% increase over the five-year average were well below the Northern Forest’s overall increase. It was the same story in Price and Bayfield counties.

Predation from wolves, bears, bobcats and coyotes certainly plays a role, but changes in habitat as well as hunter numbers and effort could also have big impacts on how many deer are taken.

With groups such as the Wisconsin Conservation Congress and Wisconsin Wildlife Federation objecting to the state’s recently released draft wolf-management plan, the Department of Natural Resources has announced an extension to the public-review and comment period through Feb. 28 to allow more time for citizens to share feedback.

Members of the public are encouraged to review the updated plan in detail before submitting comments. It’s available to read and comment on at dnr.wisconsin.gov/topic/wildlifehabitat/wolfmanagementplan.

Anti-hunting groups have largely supported the plan, including recommendations to drop numeric wolf-population goals and expand safe zones for wolves.

If you’re not a Conservation Patron or don’t otherwise subscribe to Wisconsin Natural Resources magazine, the DNR is offering a better-than-half-off deal for a last-minute gift idea.

The special holiday rate – $5 for five issues – is valid through Dec. 26. The subscription starts with the Winter issue, which includes a 2023 Wisconsin State Parks calendar. Call 800.678.9472 to give a gift.