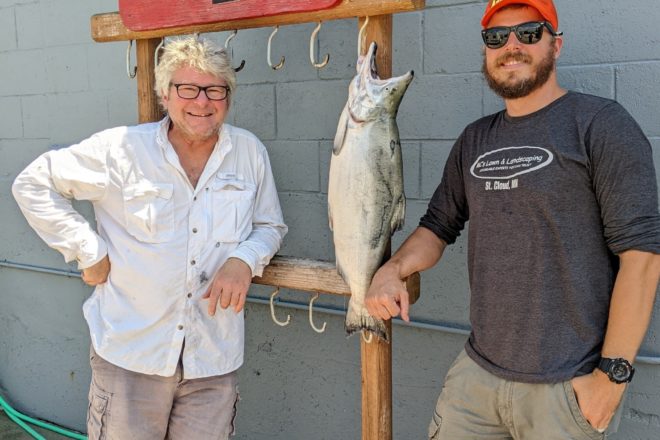 (From left) Seventeen hours after the catch, Mark Sondreal and Landen Rodemeyer posed with a now-faded state-record pinook salmon at Capt. K’s Landing in Algoma. Photo by Kevin Naze.

The verdict is in: Wisconsin’s newest state-record salmon was a case so unusual it needed a lawyer present.

“It’s pretty cool,” Sondreal testified from his camper at Capt. K’s Landing along the Ahnapee River in Algoma Monday night. “You just go fishing because you love fishing. I never, ever thought I’d catch a state record.”

Sondreal and his star witness, friend Landen Rodemeyer of Prior Lake, Minnesota, were fishing Lake Michigan about seven miles off Algoma late Sunday, Aug. 14, when the hybrid hit a Moonshine spoon set 95 feet down on a rigger in about 260 feet of water.

Fisheries staff certified the new record just a week after they’d done so for a Sturgeon Bay pinook that had broken a 2016 mark by more than two pounds. Another hybrid large enough to beat the old record was caught a day later. That’s three in a 10-day span, and an excellent opportunity for DNR fisheries staff to add to its growing database of rare species.

Sondreal donated the fish to the DNR for research, but he plans to get a replica made. He said the pinook fought nothing like a “king,” the nickname given to the lake’s most sought-after species, the Chinook salmon.

“That’s why I’m here year after year,” Sondreal said. “Nothing rips off 100 yards of line like a big king. It’s saltwater fishing in fresh water. If that doesn’t get your heart racing, nothing will.”

Seconds later, Sondreal made a motion for Rodemeyer – a logistics guy for Rahr Malting Company in Shakopee, Minnesota – to prepare some liquid refreshments, or finish cleaning and bagging the night’s catch. Rodemeyer, who tends bar with Sondreal at a Shakopee brewery, chose the latter.

Next, the Minneapolis attorney introduced more evidence to prove he’s passionate about Lake Michigan, detailing his humble beginnings seven or eight years ago, fishing from an 18-foot Crestliner with a tiller motor.

“I grew up fishing the Bemidji area,” Sondreal said. “Walleyes, bass, pike, panfish. We came over here and didn’t know what we were doing, but miraculously caught, like, 10 or 12 fish, and I got the bug. I’ve been doing it ever since.”

The next year, Sondreal purchased a 26-foot Bayliner Trophy. He said he fishes out of Algoma 50-60 times a year, and he’s introduced more than 20 Minnesotans to the Lake Michigan salmon and trout fishery.

“There’s nothing else like it,” Sondreal said. “It puts its hooks in you.”

As he and Rodemeyer were motoring up to the Algoma harbor at dusk Sunday night, the Shanty Days fireworks began.

“A state record, and fireworks from the lake,” Sondreal said. “Not a bad night.”

Logan Sikora is a new fisheries biologist at the Sturgeon Bay Department of Natural Resources office. His primary responsibilities are Chinook salmon and steelhead management for Lake Michigan, as well as inland fisheries for Door and Kewaunee counties.

Sikora is originally from Colfax. From a young age, he developed a passion for the outdoors, with a particular interest in fish ecology and management. He earned his bachelor’s degree in fisheries and wildlife ecology from Northland College and his master’s degree from the University of Wisconsin-Stevens Point.

Sikora has worked for the DNR since 2016, with time spent working on Lake Superior and inland waters across the northern half of the state. More recently, he completed high-priority research related to fisheries management and fish community dynamics for the agency’s Office of Applied Science.

Sikora said he enjoys hunting, fishing and camping with his girlfriend and their two dogs, and he looks forward to making connections and working with diverse groups of stakeholders interested in inland and Lake Michigan fisheries. He can be reached by email at [email protected].

Ducks Up, Grouse Down

Spring surveys of ruffed grouse and pheasants in Wisconsin showed below-average counts, but duck and goose numbers were up. Pheasants were up slightly over 2021, but still below the five-year average. Grouse, meanwhile, were down about 5%.

Find all the wildlife survey reports at dnr.wisconsin.gov/topic/WildlifeHabitat/reports.html.

The DNR will share the latest state and federal Lake Michigan fisheries research and receive public input on salmon and trout stocking during a meeting Aug. 30, 6-9 pm, at Lakeshore Technical College’s Centennial Hall West in Cleveland, located between Manitowoc and Sheboygan east of I-43.

Anyone can attend in person, or online via Zoom. Find out more, including a link to register in advance, at dnr.wisconsin.gov/topic/Fishing/lakemichigan/LakeMichiganSalmonandTroutMeetings.html.

As of Aug. 12, Lake Michigan water levels were down nine inches from last August and two feet below the monthly record, set in 2020. Lake levels were still 41 inches above the record monthly low, set in 1964, and nine inches above the 100-year average. Levels are projected to drop two inches during the next month, but last weekend’s heavy rains could have changed that by now.