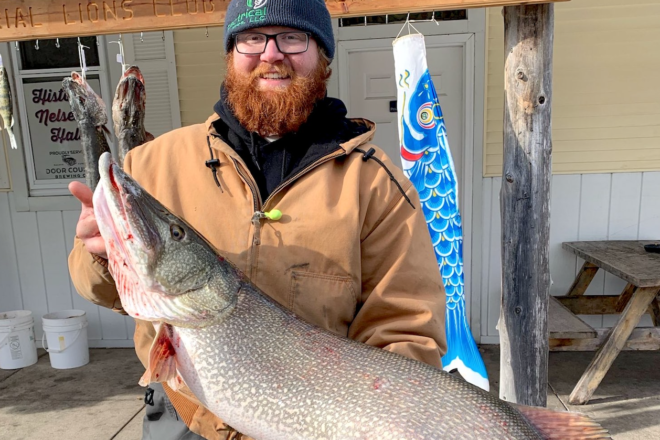 First-time buyers, as well as those who haven’t purchased a license in at least a decade (known as lapsed anglers), can buy for a bargain price: just $5. If you want to fish for Great Lakes salmon and trout or inland trout, you’ll need to add – and pay additionally for – stamp privileges, which are used to fund stocking and other fisheries needs.

Residents and nonresidents aged 16 and older are required to purchase a license in order to fish. That’s more than 1 million paid anglers. No firm estimates are available, but many believe that number could easily be doubled when adding kids aged 15 and younger who aren’t required to have a license.

To browse a list of frequently asked questions about Wisconsin fishing, check out gowildagent.wi.gov/Pages/Fishing.aspx. Regulations pamphlets are available wherever licenses are sold, or review them through a link at dnr.wisconsin.gov/topic/Fishing.

March 6 is the last day to fish in smaller Green Bay tributaries and ditches before they’re off limits to give northern pike, walleyes and other species a chance to spawn. They’ll remain closed through the end of April.

More important locally is March 15: the last date to keep yellow perch on Green Bay until May 20. The two-month closure has been in place for more than a decade and may be part of the reason for a resurgence in perch fishery.

Starting March 8, the bay walleye limit drops to one fish larger than 15 inches. That same day, the Fox River’s trophy fishery changes to a daily bag of one walleye of a 28-inch minimum size.

Right now some anglers are focusing on pike, walleye and perch that are moving shallower into bays and harbors and off creek mouths in preparation for spawning. Others are fishing deep water for whitefish, with some bonus smelt, burbot and brown trout showing up in some locations.

Although it’s likely there will still be plenty of ice for fishing during the coming weeks, anglers must closely monitor changing conditions.

Thawing temperatures, rain and the midday sun that’s getting higher in the sky each day will all work to weaken the ice, causing thin spots around docks, islands, reefs and shorelines. Strong offshore winds can also open pressure cracks and strand fishers. If you haven’t been out lately, check with local bait shops for the latest conditions and areas to avoid.

Ice shelters can be used day and night on Green Bay waters through March 13; after that date, anglers may continue to use a shelter, but they must remove it daily when not in use.

March 6 is the deadline for removing shelters on inland waters south of Highway 64, and March 13 for inland waters north of that line. If fishing the Fox River in the De Pere area, shelters must be removed daily because of rapidly changing conditions.

The first open-water Great Lakes fishing contest of the season is set for April 7-10 in Door and Kewaunee counties. Depending on the weather these next few weeks, it could also mean some cautious walk-on ice fishing in bayside harbors.

New this year, the Baileys Harbor Brown Trout Tournament is offering daily port prizes and more than $8,000 total in cash and prizes for the four-day event. Keep up with the latest on the event’s Facebook page, or visit baileysharbor.doorcounty.com.

Department of Natural Resources wildlife biologists will present three public hearings starting at 7 pm March 8-10 via Zoom on the proposed 2022 migratory game bird seasons. The state’s Natural Resources Board will set the final season structure – which is expected to be similar to recent years – during its April meeting.

Alternatively, you can learn more beginning March 8 at dnr.wisconsin.gov/topic/hunt/waterfowl, and email comments about waterfowl seasons and regulations to [email protected] or [email protected].

Last year, the emerald ash borer was found in 90 more Wisconsin communities, including 66 townships, 14 villages and 10 cities. That brought the state’s total to 898 known communities.

The DNR said the emerald ash borer has now been found in 61 counties and believes additional unreported infestations are present.