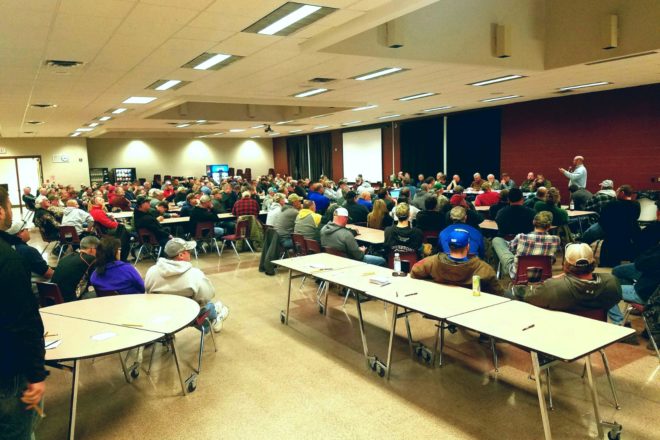 With COVID-19 restrictions still in place within the Department of Natural Resources (DNR), in-person meetings – like this gathering of deer hunters and Jeff Pritzl, DNR Deer Program specialist, in Door County a few years back – are out. That includes the April fish and wildlife hearing and Conservation Congress meeting, which will feature online voting for the third straight year. Photo by Kevin Naze.

Normally conducted in person, voting will again be done online. Members of the public will soon be able to submit citizen resolutions to be considered. Though nonbinding and advisory only, voting results sometimes influence rule changes.

Conservation Congress liaison Kari Lee-Zimmerman said the state’s Natural Resources Board (NRB) will be discussing this year’s questionnaire during the Feb. 23 board meeting in Madison, and any DNR proposals or CC or NRB advisory questions will be approved at that time.

In 2020, a record-setting 64,943 online responses to the hearing questionnaire were received. Last year, the number dropped to 12,642. Online input for 2022 will begin April 11 at 7 pm and remain open for 72 hours. Read more about the process at dnr.wisconsin.gov/about/wcc/springhearing.

Commercial fishers gained and lost at the same time as a result of a final rule approved during the Jan. 26 NRB meeting.

It was frustrating for netters such as Charlie Henriksen, who had felt the science was easily behind the proposed increase, but a partial victory as well for sport anglers.

A public hearing last month resulted in 132 written comments regarding the 800,000 figure, nearly equally split between support and opposition.

Lake Michigan fisheries manager Brad Eggold said the rule approved would provide additional protection for fish species of concern to sport anglers and allow more time to gather additional data, including latent mortality of released fish. It would also allow for quota increases in two years if supported by data.

Research suggests the Green Bay whitefish population nearly tripled between 2008 and 2018, supporting both a commercial fishery and a thriving winter sportfishery.

Safety on Ice and Snow

DNR safety specialists are encouraging anglers, snowmobilers and all other winter recreationists to be safe when traveling on ice or snow.

Even with the extreme cold air in late January, ice anglers were still finding some thinner spots over the weekend that definitely would not support a truck. Most fishers are using snowmobiles and UTVs, or walking out on foot.

The DNR reminds everyone to dress for the conditions and carry some basic safety gear. Avoid pressure ridges, ice heaves, inlets, outlets and narrows with currents that can mean thin ice.

DNR Warden Chris Kratcha also encourages snowmobilers to not interfere with other winter-sports enthusiasts, avoid alcohol until finished for the day, slow down, stay on marked trails and follow all other safety rules.

The National Deer Association (NDA) said hunters in the United States harvested an estimated 6.3 million white-tailed deer during the 2020-21 season, the most since 2011.

The estimated buck harvest of 3,041,544 was the most in 21 years. Additionally, NDA Chief Conservation Officer Kip Adams said a record percentage of those bucks were at least three and a half years old. That’s due to declining pressure nationwide on yearling (age one and a half) bucks. Only about one in four bucks taken in 2020-21 were yearlings. About 40% were estimated to be three and a half or older.

Adams said hunters killed slightly more bucks in total during the record 1999-2000 season, but about half were estimated to be yearlings.

Students in grades 4-6 may enter the DNR’s Keep Wildlife Wild poster contest to participate in the “If you care, leave them there!” initiative. It reminds people to observe wildlife at a respectful distance and be mindful of young animals, which may be incorrectly perceived as being orphaned. In most cases, the mother is somewhere nearby, waiting to tend to her young.

Poster entries are due by Feb. 18 at 5 pm. See the entry criteria and learn more via a link at dnr.wisconsin.gov/topic/WildlifeHabitat/orphan.