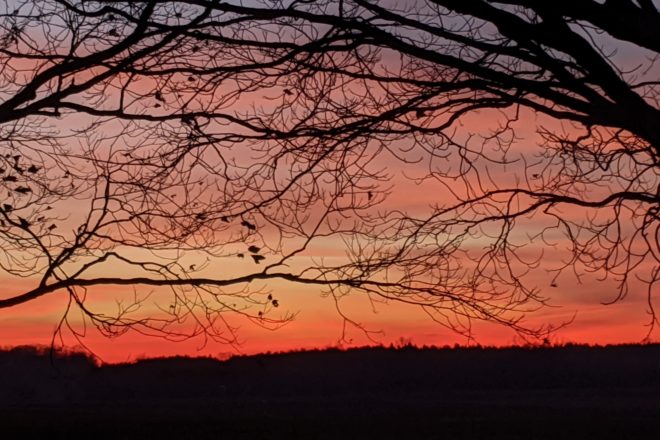 Blaze orange will continue this weekend with an antlerless-only firearm deer hunt through Sunday – and perhaps in the sky as well. Photo by Kevin Naze.

For the third time since forming in 2014, the Door County Deer Advisory Council (CDAC) wants hunters to try to decrease the peninsula’s whitetail herd.

“With the lack of forestry regeneration, it’s still totally evident there’s too many deer on the landscape,” said council member John Propsom of Sturgeon Bay.

The role of the DNR and CC reps is advisory only, unless there’s a tie. If a CDAC member is absent or abstains, Coulthurst could cast a deciding vote. Monday night’s roll call was 7-0.

Each spring, CDACs recommend county deer quotas, the number of free antlerless tags to give with each license, and the number of bonus public and private antlerless permits that are available for sale. Every three years, the groups provide recommendations to try to decrease, increase or maintain the county’s herd-size objective.

Monday’s conference-call vote was preliminary. The council will consider public input before making its final recommendation during another phone-in meeting Jan. 25.

There’s also another possibility: different recommendations north to south. Coulthurst said that if the DNR would allow the county to join some others being considered for a split, the recommendation could be revisited.

Some council members said hunters in Northern Door are concerned that there are too many coyotes, too many different hunts and a deer herd that’s smaller than they’d like to see.

There have also been complaints about baiting in excess of the legal limit. DNR Warden Chris Kratcha said the solution to illegal baits is to call wardens.

In response to a comment about electronic registration preventing the DNR from getting a better handle on just where in a county deer are being shot, wildlife biologist Josh Martinez said he hears that a lot, and not just in Door County.

A council member wondered whether an extra step could be added to the registration process, such as asking a hunter to enter a township or zip code to better gauge harvest trends in specific areas.

Martinez said the only way would be through separating the units, as was done years ago when Northern Door, Southern Door and the islands were all in different management units.

To learn more about CDACs and how to participate or comment online, visit dnr.wisconsin.gov/topic/Hunt/cdac.

Door County made a nice recovery after opening weekend, but it was still one of only two counties in the DNR’s 35-county Central Farmland Region that saw a reduced gun buck harvest during the nine-day season. Marinette was the other, down 1.5 percent.

If you didn’t fill a buck tag, you’re in good company. Only about one in every seven members of the blaze orange crew did so, down from the best years of about one in four (1995 and 2000) and a significant drop from nearly one in five just two years ago.

Eric Lobner, the DNR’s wildlife management director, said many hunters are one-license buyers, and more are participating earlier in the season. Crossbow license sales were up 17 percent this year, and through late November, more than 60,000 deer (nearly 36,000 bucks) were taken with crossbow.

Archery sales are up about 5 percent, with vertical bow hunters taking another 26,000-plus bucks and more than 18,000 antlerless deer. The youth firearm season saw more than 7,000 deer taken.

Even with more than 110,000 deer off the landscape before the gun hunt, preliminary figures showed the firearm crew still registered at least 188,712 animals: 85,340 bucks and 103,372 antlerless deer. Led by the farmland regions, the statewide gun buck kill was up 12 percent and the antlerless harvest up 19 percent. Heading into the gun season, the combined bow and crossbow harvest was up 17 percent.

Should the crossbow season be shortened? Should the bow and crossbow seasons close five days prior to the gun opener, and not reopen until after all the gun hunts are over? Send your thoughts to [email protected].

• A self-inflicted shooting incident on Washington Island was the state’s only hunting fatality during the nine-day gun season. There were eight nonfatal shooting injuries.

Of the nine incidents, four took place during deer drives (a hunting method involving some hunters walking through cover to move deer while others post the perimeter); three were self-inflicted; and two were other accidental shootings. One happened when a loaded firearm was placed in a vehicle after hours and discharged when another hunter pushed the muzzle away.

The 10-year average for hunter shooting incidents is 6.8. Last year, there were four firearm-involved injuries and no fatalities.