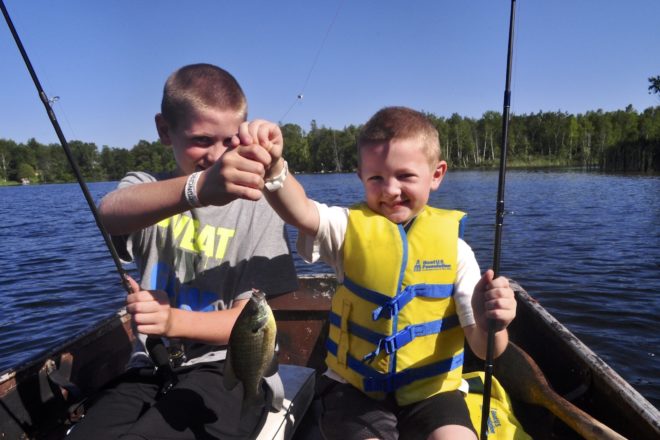 Panfish such as this bluegill are willing biters in the area’s inland lakes and rivers and in Green Bay harbors and marinas. Photo by Kevin Naze.

In spring, a young man’s thoughts often turn to his first love. For many of us baby boomers, that love was fishing. A broken heart? Who wouldn’t have one after the line breaks while fighting an unseen monster?

Back then, I didn’t need the latest study to tell me that relaxing outdoors and being close to nature was the primary reason why people fished, or that those who participate frequently in outdoor recreation are more satisfied with life.

It was just, “Mom, can you drop me off at …,” followed by the location of any of a half dozen or more spots where worm-digging or nightcrawler-picking usually preceded my adventures. Most of the time, they were solo outings to fish off a dock or a rocky stream bank, or in an old, wooden boat that I’d rented or borrowed from a lakeside business or property owner.

Many kids today don’t have it so easy. Millions live in urban or suburban areas where fishing access is not readily available, or where competition for the few existing spots is heavy. There are also so many scheduled activities, leaving little time for unstructured leisure.

Years ago, getting away from it all meant a chance to explore, to test my limits and my skills. Today I try to pass on what I’ve learned to my friends and family members. It doesn’t matter so much where you fish or what you use for bait – it’s just taking the time to go that’s important.

Wisconsin’s annual Free Fishing Weekend, held June 5-6 this year, is a great time to get newcomers, young or old, hooked on fishing. More than 90,000 state residents purchased a first-time fishing license last year, joining nearly 1.4 million returning anglers ages 16 and older. (Those who are 15 or younger don’t need a license.)

Fishing can take you away from the noise and busyness of life. Go solo, and the solitude will spark a fresh outlook. You’ll return energized and ready to tackle the latest project around the home or office.

Sharing uninterrupted conversation while fishing with a family member or friend is part of the experience of accompanied outings. At other times, you’ll enjoy quiet moments as your mind drifts while waiting for a bite.

Taking kids on their first fishing trip is one of my favorite things to do. Besides the rods, reels and bait, we take life jackets, sunscreen, bug repellent, snacks and refreshments. Whether gathering our own bait or buying it, we shoot for low-pressure trips with plenty of laughter, and we pick up the litter that others have thoughtlessly left behind.

The goals are to have a fun, safe time; teach some skills; and educate the youngsters about why it’s so important to have clean air and water. And the lesson often ends the same way it has for more than four decades: with a plateful of pan-fried bluegills, sunfish, crappies or perch.

To pick up fishing tips, visit an area bait shop or learn more before you go at takemefishing.org and dnr.wisconsin.gov/topic/Fishing.

Smallmouth bass fishing is catch-and-release only until June 19 in the Ahnapee, Kewaunee and Mink rivers, plus in all other Lake Michigan tributaries north of Highway 29. Smallmouths also may not be kept until July 1 in all waters within a quarter mile of all islands in the Town of Washington Island.

Yellow perch fishing is closed on Lake Michigan and tributaries such as the Ahnapee River until June 16. Perch fishing reopened May 20 in Green Bay waters.

Because of the expiration of an emergency rule and the failure to put a permanent rule in place during the COVID-19 slowdown, the lake trout daily bag limit is back to two per day. The state Department of Natural Resources was expected to correct the oversight and return the bag limit to five by the end of June.

Humane Society of the United States Gets a D

CharityWatch, an independent evaluator, has given the Humane Society of the United States (HSUS) a “D” grade – the latest in a pattern of poor marks for the animal-activist group.

Although HSUS is not affiliated with area humane societies that do excellent work, it certainly benefits from the name confusion in its fundraising.

CharityWatch found that HSUS spends 53% of its budget on overhead, and little of the money it raises goes to the animals pictured in its advertisements for donations. HumaneWatch, a group that keeps tabs on the animal-rights movement, says only about 1% of the money raised by the organization is given to pet shelters. Meanwhile, the group says 70 employees make six figures, including the CEO at more than $400,000.

As of May 21, Lake Michigan was down 17 inches from last May’s record. Below-normal precipitation and above-average evaporation caused by warmer temperatures during the past year – less ice cover on Lake Superior, which feeds the Great Lakes – drove the rapid decrease.

Despite the drop, lake levels were still 18 inches above the 100-year average and four feet above the all-time monthly low, set in 1964.

Hunters who want a rare shot at a Wisconsin elk must apply for a tag by May 31. Only four tags are awarded through a random draw, and the Rocky Mountain Elk Foundation raffles off one other tag. During the first three hunting seasons, applicants generated more than $600,000 to support the Wisconsin elk-management program.