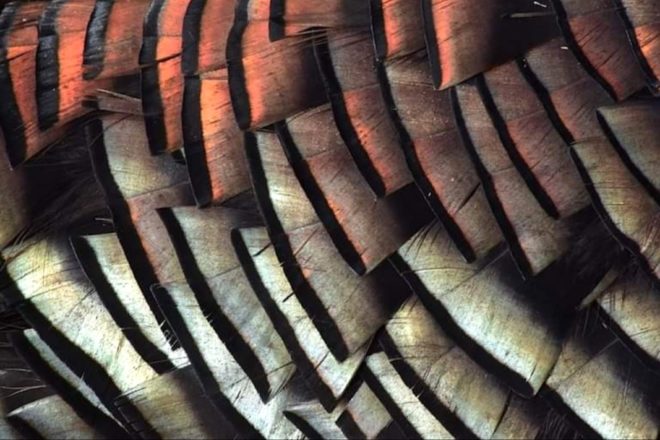 Wild turkeys have thousands of feathers. Many of them on adult males have beautiful, iridescent splashes of green, copper, bronze and gold. Photo by Kevin Naze.

After a two-year absence, Learn to Hunt wild-turkey programs returned this spring. Judging by photos on social media from across the state last weekend, there were many success stories.

Next up is the annual youth turkey hunt April 16-17. It’s for those ages 15 and younger who have a valid spring turkey-hunting license, stamp and harvest authorization.

The bag limit is one male or bearded turkey (a small percentage of hens have beards). Those who don’t get a turkey during youth weekend may hunt again during the time period when their regular-season tag is valid.

Youth hunters must be accompanied by someone 18 years or older who must be within voice or visual contact of youths who have completed a hunter-education course, or within arm’s reach of those who haven’t. Mentors must possess a current, valid hunting license for any type of game. If born after Jan. 1, 1973, mentors must be graduates of a hunter-safety education course or have completed basic training with the U.S. Armed Forces.

Meanwhile, the first of six seven-day regular spring wild-turkey hunting periods will begin April 20. As of April 12, there were still more than 1,100 leftover Zone 2 permits available for the sixth period, May 25-31.

In one of the closest finishes in the event’s history, Sherman Johnson topped Matt Anderson by five-hundredths of a pound to win the top prize of $1,000 in the Baileys Harbor Brown Trout Tournament last weekend.

Johnson’s 21.54-pounder was reportedly hooked in the Sturgeon Bay area opening day, and Anderson’s 21.49-pounder was said to have come through the ice on the northwest side of the Door peninsula.

To review a terrific summary of the event, check out the Door County Harbor Angler Report from April 12 at baileysharbor.doorcounty.com.

An early catch-and-release season for bass in the Washington Island complex – which includes waters within a quarter mile of Washington, Detroit, Plum, Pilot, Hog and Rock islands – expired April 1 and won’t return.

Removing the catch-and-release season will protect bass in the area’s cooler waters throughout most of their spawning period. The bass season there will reopen July 1.

Pushback from local anglers helped to spark the return of the closed season, which means no intentional targeting of bass during spring and early summer.

Fisheries biologist Scott Hansen noted that because smallmouth bass in the area are genetically distinct, the closed season may have contributed to the stability and genetic diversity of the Green Bay smallmouth bass population.

Arbor Day has its roots in Nebraska in 1872 and is meant to reinforce the vital importance of trees and forests, including the many ways in which they improve our environment and serve our everyday needs. Get tips on planting trees and learn more at dnr.wisconsin.gov/education/arborday.

Meanwhile, you can help to protect and enhance Wisconsin’s natural resources by volunteering. Check out the opportunities at dnr.wisconsin.gov/volunteer.

In mid-October of last year – following a two-year drawdown meant to create improved fish habitat once water levels were restored – the 65-acre Forestville Flowage was stocked with about 2,351 largemouth bass fingerlings averaging 3.3 inches, as well as 47,949 fingerling bluegills.

DNR fisheries biologist Nick Legler expects the bluegills to reach about six inches and the bass about 14 inches in four to five years. In addition to providing angling opportunities, the stocked fish may also benefit the ecosystem by helping to control carp populations through predation and consumption of tiny carp fry.

Due to a glitch in the software that prevented early access last weekend, the deadline to submit comments on preliminary season recommendations by County Deer Advisory Councils (CDACs) has been extended through April 17.

Both Door and Kewaunee counties’ CDACs will meet later this month to finalize this year’s recommendations. Find out more and comment at dnr.wisconsin.gov/topic/Hunt/cdac.

Lake Michigan water levels have risen four inches during the past month, and as of April 8, they were 40 inches higher than the record monthly low, set in 1964.

Water levels were down a foot from April 2021 and down 26 inches from the all-time April high, set in 2020. Lake levels were listed at nine inches above the 100-year average.

Virtual Hearing Is Over

The 2022 Wisconsin DNR and Wisconsin Conservation Congress Spring Hearing offered the opportunity for online input earlier this week. The results, which are advisory only, will be posted at dnr.wisconsin.gov/about/wcc/springhearing as soon as they become available.

If you’re a high school artist who’s interested in submitting a design for the 32nd annual State Park Vehicle Admission Sticker Contest, send it by the April 30 deadline. Get all the details at dnr.wisconsin.gov/topic/parks/designcontest.