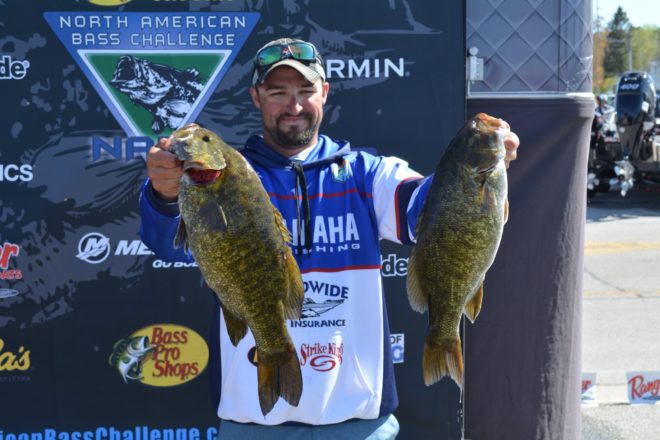 Adam Neu of Sturgeon Bay holds up two of the trophy Door County smallmouth bass that helped him and fishing partner Grant Ehlenfeldt of Osceola earn a prize package valued at more than $45,000 in the North American Bass Challenge Sturgeon Bay Open May 13-14. Photo courtesy of the NABC Facebook page.

Finishing second among a field comprised of some of the top bass anglers in the Midwest and Canada were Jody Robillard of Brussels and Chad Delfosse of Luxemburg. Their two-day total on 10 bass was 52 pounds, one ounce, earning them $10,500 in cash and other prizes totaling more than $12,000.

The SBBT, pushed back a day by high winds, saw four seven-pound-plus smallmouths caught, the largest at 7.5 pounds. Doering and McKenzie had two of them, 7.25 and 7 pounds. There were 15 other fish caught in the event that ranged from 6.00 to 6.69 pounds.

A catch, weigh-on-the-water and release event, the SBBT ended just two days prior to the NABC event. The winning team’s 5.6-pound average per bass was helped by landing three of the heaviest 12 fish over the two days.

Doering and McKenzie went on to place 16th in the Sturgeon Bay Open. Neu, meanwhile, was part of the fourth-place team in the SBBT.

There were 222 five-fish tournament limits brought to the stage at Sawyer Park in the 32nd annual Sturgeon Bay Open, and the average size of more than 1,000 bass weighed was 4.25 pounds. The heaviest bass, caught by guide Alex Gorske of Brussels, weighed an impressive 7 pounds, 12 ounces.

Neu, who began fishing the event at about age 11 with his dad, Pat, is now 26, working full-time for Howie’s Tackle & Archery in Sturgeon Bay and traveling the country fishing for bass professionally.

“The way the year set up (cold spring, and a quick warmup last week), fishing was just perfect,” Neu said. “Fish were everywhere, and they were biting.”

Neu said bass are likely on their beds this weekend, but weren’t quite there last week.

While most tournament anglers use new high-resolution sonar technology that pinpoints fish well off to the sides of the boat, Neu said he didn’t even look at it, instead relying on his extensive knowledge of where pre-spawn bass like to stage.

“We weren’t sight fishing,” Neu said. “Most of the fish were in less than four feet of water. We mostly used tubes, long casts and a slow retrieve. We caught a few on swimbaits.”

Neu, who finished fourth in the SBBT with 50.95 pounds, said he likes both the on-the-water weigh and transport in the livewell formats.

“I do like bringing fish to the stage,” Neu said. “But releasing them on the water, especially when it’s the first of back-to-back tournaments, that’s good. If they can get it moving smoothly, I’m all for it. It was a lot better this year.”

Heavy fishing pressure can make bass tough for the average angler to consistently catch, Neu said, but he called the size of the top-end bass “insane,” noting that a team that averaged four pounds a bass — big enough to win the event decades ago — placed 70th.

Neu and Ehlenfeldt, 25, met in college at UW-Platteville. After they sell the boat, Neu said he planned to invest most of the money.

See how all the teams fared at www.sbobt.org and http://www.sturgeonbaybasstournament.com.

Some hunters of wild turkeys and wild edibles (like mushrooms, ramps and asparagus) have been spotting newborn fawns while afield in the past week.

Unless you see the mom dead or injured nearby, it’s important to leave the fawn alone. They instinctively lie down much of the day while mom is away from the immediate area, feeding to boost her milk production while keeping a distance so as not to attract predators.

Snap a quick photo, but don’t get too close. If the fawn gets up and runs, leave the area immediately. Mom is not far away, and the hundreds of white spots on the fawns body are only a great camouflage if it’s lying still.

After just two weeks, fawns double in weight from the nutrient-rich milk, and begin to add forage to their diet. Their weight can double again in another two weeks, and they can be completely weaned from their mothers in as little as 10 weeks.

The state Natural Resources Board will meet May 25 in Madison. An elk herd update and summary of the 2022 spring fish and wildlife meeting questions are among the agenda items. You can livestream the meeting off a link at https://dnr.wisconsin.gov/about/NRB/agenda.html.

The moorings will transmit via satellite real-time wind, wave, and water column temperature information that can benefit anglers, boaters and divers.

You can find a link to the information at https://glbuoys.glos.us/.

As of May 13, Lake Michigan water levels were up four inches in the past month but still down eight inches from a year ago and 25 inches below the monthly record set two years ago. The U.S. Army Corps of Engineers projects levels to rise about two inches in the next month.