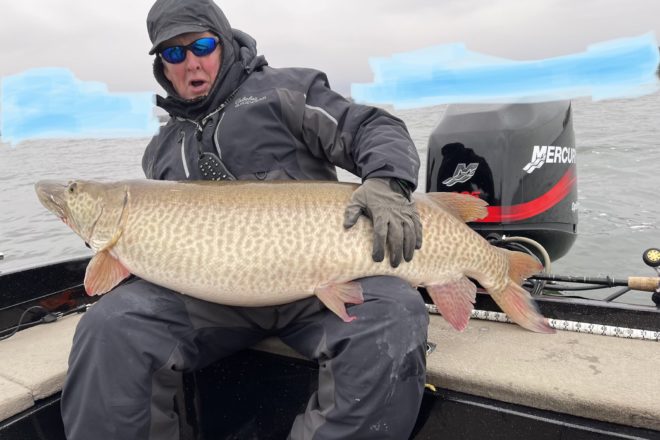 Ron Hedsand of Sturgeon Bay holds a 55-inch Great Lakes muskie that he reeled in Dec. 7 off the Door County shore. The fish – estimated to weigh close to 60 pounds – was released. Photo by John Vieau.

Door County’s roller coaster of a winter continued this week as Mother Nature teased ice anglers with a few cold nights, followed by another mild spell.

The 10-day forecast isn’t much better, with highs often above freezing and lows mainly in the 20s. That’s not what’s needed to lock in what so far is as much open water on Green Bay as ice.

Satellite images Monday – one of the few days during the past two weeks with some sunshine – showed vast areas of open water. Even where there was ice, it was mainly in large sheets separated by cracks that could open during strong wind events, causing some sections to float away from shore.

For the most part, fishers have stuck to nearshore areas of protected bays, harbors and marinas, or they’re trying their luck for panfish, bass and pike on inland lakes, or pike and trout on the Ahnapee River.

Ron Hedsand of Sturgeon Bay – an avid year-round angler who owned Sunset Grill on Rileys Point for 30 years – was one of a few diehards who took advantage of milder-than-usual weather during much of the fall to chase smallmouth bass and muskies.

On Dec. 7, Hedsand was fishing with Sturgeon Bay friend John Vieau. The two had caught a lot of fish together over the past 12 years, but the monster muskie they boated just before noon took the cake – or, rather, the bait.

“Although we catch many different kinds of fish, Ron is a diehard muskie fisherman,” Vieau said. “Always has a good attitude and confidence.”

The duo began throwing large rubber baits in 15-20 feet of water in the bay of Green Bay off the Door County shore. Hedsand was working a bait called a Bulldawg slow and deep, sort of jigging it near the boat before coming up into a popular muskie tactic called the Figure 8.

The first time they saw the fish, they knew it was huge.

“I got it in the net and told Ron to relax and catch his breath,” Vieau said. “I quickly removed the hooks from the fish and the net. Then I got my phone, the measuring stick and measuring tape ready before lifting the fish out of the net.”

The long, thick muskie stretched 55 inches, with a 29.5-inch girth. A formula commonly used by anglers puts that at just under 60 pounds, but it doesn’t take into account how deep the girth was front to back. Either way, it’s thought to be one of the largest muskies ever caught on Green Bay.

Thousands of people from around the globe are expected to participate in the 26th annual Great Backyard Bird Count Feb. 17-20. Participants enter their sightings on the Merlin Bird ID app or eBird (mobile app or computer).

Learn more about how to take part at birdcount.org.

Have a spectacular bird photo that you think is a prizewinner? Maybe it’s a white pelican swallowing a walleye below the dam on the Fox River, or a hummingbird sipping sugar water at your window feeder. Whatever it is, you can enter it in a free contest with valuable prizes through Feb. 5.

Find out more at dl.allaboutbirds.org/birdspotter-official-rules-0.

Another public meeting to gather feedback on Lake Michigan salmon and trout stocking will be held Jan. 23, 6 pm, at Lakeshore Technical College, and a Zoom option will also be available. Department of Natural Resources fisheries staff will present survey and stocking information.

Payne is an outdoors enthusiast and conservationist who has been the Sheboygan County administrator for more than two decades. Prior to that, he was executive director of the Land and Water Conservation Association and served for five years at the Department of Agriculture, Trade and Consumer Protection, including as the director of its Farmland Preservation Program.

Originally from Stevens Point, Payne grew up learning how to fish, trap and hunt from his father along the Wisconsin River. He lives in Plymouth, where he raised his family and, as a boy, worked on his grandmother’s farm.

President Biden signed H.R. 5973 – the Great Lakes Fish and Wildlife Restoration Reauthorization Act of 2022 – into law Dec. 27. Administered by the U.S. Fish and Wildlife Service, it reauthorizes $6 million annually through 2028 for vital fisheries and wildlife research, along with habitat-restoration projects. The original act was enacted Nov. 29, 1990, and it was reauthorized in 1998, 2006 and 2016.