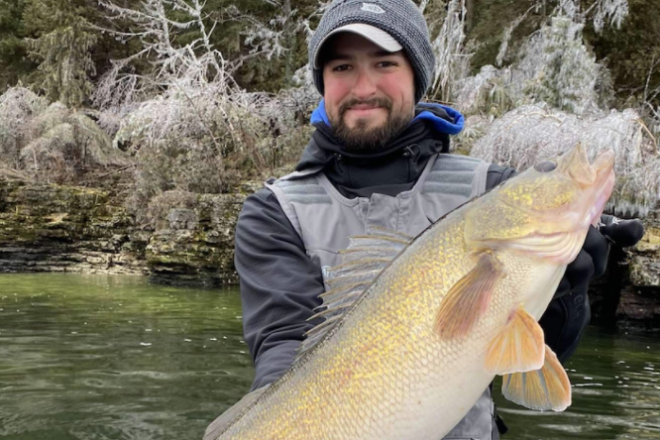 Adam Neu of Forestville landed this 31.75-inch, 12.61-pound walleye while targeting bass with a Howie’s Tackle green pumpkin tube Monday. He released this trophy – his personal best – along with many large smallmouths. Photo courtesy of Adam Neu.

If you’re a fan of late gun deer-hunting opportunities and still have tags open, there will be an opportunity to try for some venison Dec. 24-Jan. 1. Both Door and Kewaunee counties are included in the “holiday hunt”: a nine-day, antlerless-only season designed to reduce the herd in specific farm zones.

Depending on which side of the fence you sit on, these hunts are either popular or very unpopular. During a virtual public meeting that the DNR hosted Dec. 9, hunters, landowners and snowmobile enthusiasts who are opposed to late-season gun deer hunts raised a number of concerns.

One possibility – not currently allowed due to legislative action a decade ago – is exchanging the late hunts with an earlier October antlerless gun deer hunt. Formerly known as T-Zone hunts, the season was unpopular with bowhunters because it disrupted prime pre-rut activity late in the month. It was eventually moved two weeks earlier.

If the holiday gun hunt is held in the future, one hunter said bucks should be allowed to be targeted. Another suggested that each hunter in farm zones should get just one buck tag per year, which could be used during any season. If hunters wanted another buck tag, they’d have to shoot a certain number of does. However, without in-person registration, that would be very hard to control.

The virtual meeting was shared with the DNR’s Deer Stakeholder Committee – yet another in a long line of groups formed over the decades to make recommendations on a deer-hunting framework that will achieve the most benefit for all.

Members of the public shared their diverse perspectives from across the state, including those up north who said deer numbers are very low, and some in farm country who want additional tools to lower herd numbers.

One hunter suggested making deer-management units up north smaller, like they were prior to the implementation of County Deer Advisory Councils (CDACs) in 2014. He said some parts of counties have very few deer while others have more. He’d like to see no antlerless tags for a number of years in those smaller zones.

Baiting was on the minds of some, including a hunter who said she leases land in Shawano County and can’t do food plots. She was upset that baiting was banned in that area even though chronic wasting disease was not found in the wild, but instead on a game farm.

Many of the callers said they were on CDACs and were frustrated by not having enough tools in their toolbox.

Ironically, some hunters are now calling for a return to October antlerless gun deer hunts and perhaps even an occasional earn-a-buck season: two tools taken away by legislators after an uprising of hunters and landowners 12 years ago. Again, without in-person registration, earn-a-buck would be difficult to enforce.

As of Dec. 8, hunters had taken more than 300,000 whitetails during all seasons, including more than 105,000 combined with crossbow and bow. That included nearly 7,000 combined in Door and Kewaunee counties.

Adjusted November figures for the National Criminal Background Check System recorded 1.9 million checks for the sale of a firearm: a 45 percent increase over 2019. Year to date, more than 19 million background checks have been performed. The previous record was about 16.6 million in 2016, when Hillary Clinton ran for president and endorsed stronger gun-control measures.

Industry analysts say that although the same could be said about Joe Biden, much of the increase in gun and ammo purchases this year could have been driven by fears resulting from civil unrest, government instability, more prisoners released during the coronavirus pandemic and efforts to defund the police in some regions.

Because states get a kickback on federal excise taxes paid on firearms and ammunition, the Department of Natural Resources could be looking at a record windfall in wildlife-restoration and hunter-education funding in 2021.

Cold weather is starting to create ice in protected nearshore areas inside bays and harbors, but it’s still too early for even cautious walk-on action.

A late-week thaw is expected to give way to colder air this weekend, then another brief mild spell before an extended cold spell beginning Dec. 22.

The open-water action this fall was the best in years for many species, including bass, perch and walleye. Shore anglers even got in on the hot bite. Once the ice firms up, whitefish will also be on the menu.

As of Dec. 11, Lake Michigan was 31 inches above its 100-year monthly average, four inches lower than last year and four inches below the previous record, set in 1986. Water levels were up 61 inches from the record monthly low, set in 2012.

The show will take place virtually Jan. 11-15. Take a sneak peek at archerytrade.org/ata-2021-moves-online.