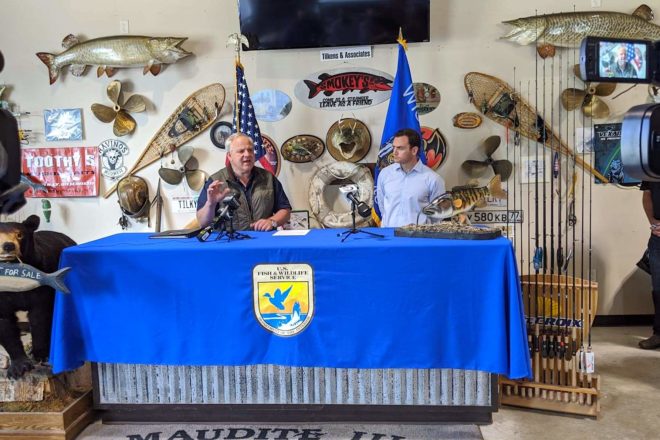 U.S. Rep. Mike Gallagher (R-Wis.) (right) listened while Secretary of the Interior David Bernhardt talked about the conservation contributions of hunters and anglers during an Aug. 21 press conference at Smokey’s on the Bay in Green Bay. Photo by Kevin Naze.

It’s not every day that a top official from the Trump administration is in Green Bay to make a major conservation announcement, but that was the case Friday when U.S. Secretary of the Interior David Bernhardt delivered remarks and took questions from the press at Smokey’s on the Bay tackle shop near the Green Bay Metro Boat Launch west of Bay Beach.

The U.S. Fish and Wildlife Service’s (USFWS) largest expansion of hunting and fishing opportunities in history – more than 850 hunting and fishing opportunities across 2.3 million acres at 138 national wildlife refuges and nine national fish hatcheries – wasn’t exactly big news here in Wisconsin, where the only addition was 11 species at the Horicon National Wildlife Refuge on acres that are already open to other hunting.

Still, the effort to increase recreational access on public lands has been an ongoing and worthy effort. Last year, 1.4 million acres of new or expanded hunting and fishing opportunities were added.

“We continue to take significant actions to further conservation initiatives and support sportsmen and women who are America’s true conservationists,” Bernhardt said.

Hunters and anglers generated nearly $1 billion in excise taxes last year, supporting critical state conservation programs. The funds come from excise-tax collections on boat fuel and on hunting, shooting and fishing equipment that the USFWS distributes to all 50 states and U.S. territories.

In addition to excise taxes collected from these activities, hunting, fishing and other outdoor activities contributed more than $156 billion in economic activity in communities across the United States in 2016, according to the most recent National Survey of Fishing, Hunting and Wildlife-Associated Recreation.

That limited opportunity – designed to reduce damage to plants, shrubs and trees – will be offered again this year. Applications are due by Monday. Email [email protected] for details.

If background checks associated with the sale of a firearm are any indication, the U.S. has been setting records for gun sales every month since the coronavirus pandemic began. That includes longtime hunters, target shooters, personal-protection advocates and first-time gun owners.

The National Shooting Sports Foundation (NSSF), the trade association for the firearm industry, estimates that nearly 5 million Americans have purchased a firearm for the first time in 2020.

NSSF surveys revealed that 58 percent of firearm purchases were among African American men and women, the largest increase of any demographic group. Women made up 40 percent of first-time gun purchasers.

This past fiscal year, Whitetails Unlimited (whitetailsunlimited.com) of Sturgeon Bay awarded more than 1,600 grants totaling more than $1.87 million in support of local projects across the country.

Volunteer chapters use the money for projects in their areas, including some of the organization’s most successful programs and initiatives, such as Staying on Target, HOPE for Wildlife, Preserving the Hunting Tradition and the DEER Program.

Since its inception in 1982, Whitetails Unlimited has provided more than $100 million to support educational programs, enhance and acquire wildlife habitat, and help preserve the shooting sports and hunting tradition for future generations.

Whitetails Unlimited has more than 475 chapters and 114,000 members nationwide.

As of Aug. 21, Lake Michigan was 33 inches above its 100-year monthly average, four inches higher than last year and one inch above the previous record, set in 1986.