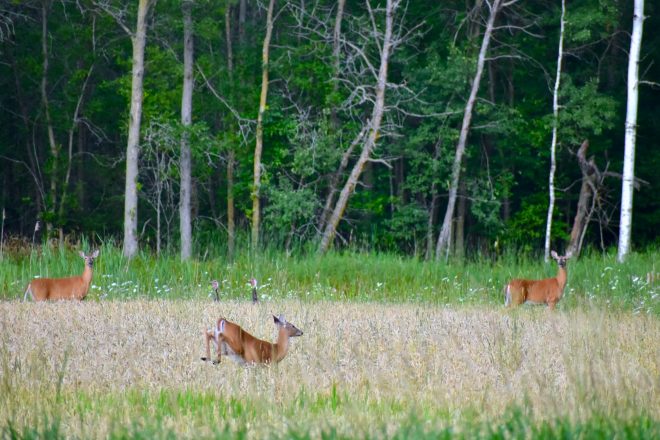 Whitetails or wild turkeys? Both are available to hunters with the right tags beginning Sept. 18. Photo by Kevin Naze.

Whether you’ve been trying to pattern a trophy buck all summer or simply want a shot at some tender, young venison, your time is drawing near. Wisconsin’s annual archery and crossbow deer season will open a half hour before sunrise on Sept. 18.

In the meantime, check your tree stands, anchor your ground blinds and practice putting arrows or bolts into a target so you’re confident when a shot opportunity presents itself.

Before you head out next weekend, also be sure you’ve got your license in hand and permits printed out. The antlerless permits are county and land specific. You can print them out yourself or pay a small fee to get help from a licensing agent.

Authorizations for both deer and turkey tags are available on the Department of Natural Resources’ (DNR) Go Wild website or at any of more than 1,000 license-sales locations.

Even though chronic wasting disease has not been found in our area, the DNR is doing surveillance again this fall. Hunters who want to submit samples can find out how through a link at dnr.wisconsin.gov/topic/hunt/deer.

Next weekend is also the opener for the fall wild turkey hunt, several small-game seasons and the youth waterfowl weekend.

On the fishing scene, good perch and walleye fishing continues on the waters of Green Bay. Walleye action is best south, while perch action is especially good in the Sugar Creek to Sturgeon Bay stretch.

More rain means more Chinook salmon have moved into the Sturgeon Bay ship canal and Ahnapee River. Some spawn-minded browns should also start showing up in the shallows of bay and lake harbors any day now.

Deer-browse damage is a big reason why large portions of state parks, Land Trust properties and Nature Conservancy lands are open to hunting.

Many landowners are already losing trees to the emerald ash borer, and they’re wondering what they can do to promote a resurgence of native trees and shrubs. If you’re trying to grow many species of native trees – whether through natural regeneration or planting – DNR foresters say you’ll increase your odds by reducing deer numbers.

The archery and crossbow deer-hunting seasons will open Sept. 18. Unfortunately for most forest owners, however – especially those with property in Kewaunee and southern Door counties – deer numbers are so high that it would take a big change in hunters’ habits to make an impact.

No matter how many free antlerless tags the DNR has provided during recent years, most hunters have chosen to use one or two at most. During an online County Deer Advisory Committee meeting earlier this year, DNR deer program specialist Jeff Pritzl said the vast majority of hunters will not target more than two deer, no matter what.

“A big challenge in trying to manage deer is getting people to buy in to the notion that there are areas that really do need more harvested if you want not only healthy forests, but a healthier herd,” Pritzl said.

Instead of waiting for late-season hunts when whitetails are mostly nocturnal in their movements in pressured areas, Pritzl encourages archers and crossbow users in prime farm-country units to target antlerless deer early in the season.

Who Owns the Wildlife?

The North American Model of Wildlife Conservation holds that all U.S. citizens are part owners in America’s wildlife and natural resources. Collectively, the Migratory Bird Treaty Act of 1918, the Migratory Bird Hunting and Conservation Stamp Act of 1934, the Federal Aid in Wildlife Restoration Act of 1937, and the Federal Aid in Sport Fish Restoration Act of 1950 laid the foundation for inspiring the model.

Wildlife is considered a public resource, independent of the land or water where wildlife live. Governments at various levels have a role in managing that resource on behalf of all citizens and in ensuring the long-term sustainability of wildlife populations.

Legal mechanisms are in place to prevent overharvest. That includes hunting seasons, bag limits and regulations geared toward harvesting the surplus. Decisions on seasons must be based on sound science, such as population surveys and the known resilience of a species through annual recruitment. In some cases, hunters aren’t even able to keep up with the growth of a species. Examples in our area include deer, Canada geese and coyotes, among others.

The Department of Tourism proposed creating an Office of Outdoor Recreation in its 2019-21 budget proposal, and the idea received bipartisan support. Wisconsin was the 14th state, and one of the first in the Midwest, to create an office dedicated to the outdoor industry. The office was renewed for another two years in the 2021-23 budget.

New Department of Tourism Secretary-designee Ann Sayers noted that outdoor recreation generates $7.8 billion toward the state’s gross domestic product, and it supports 93,000 jobs. Fishing and hunting alone combine for more than $3 billion in economic impact for Wisconsin. Boating, biking, camping and hiking are among the many other forms of outdoor recreation for which Wisconsin is known.