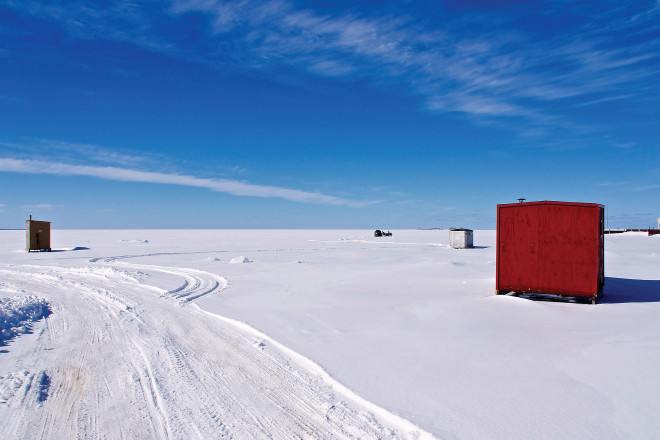 With no January thaw in sight, ice anglers are getting a belated Christmas gift: hard-water fishing hot spots that are firming up fast.

All the usual early-season access areas are worth a look, including out of Dyckesville, Sugar Creek, Little Sturgeon, Sawyer Harbor, Sturgeon Bay and on protected nearshore areas inside Northern Door bays and harbors.

Some fishers have started to explore farther out, but that’s certainly not recommended for those who aren’t familiar with local conditions.

The list of fish species ready to target is fairly long.

Yellow perch action picked up right where it left off in the fall, with some good jigging, bobber and tip-up action in and around weeds and mud flats. Try small to medium minnows, or jig with larvae baits.

Some nice pike have also been hooked. Whether using golden shiners, sucker minnows or dead bait such as smelt, it’s best to spread your tip-ups over a large area and at a variety of levels, from just under the ice to halfway down over deeper water.

The best action for walleyes is always late ice, but some have already been hooked. Try jigging the bottom foot or two early and late in the day. They’ll also take a minnow off a tip-up on occasion.

As northern harbors freeze, brown trout may be a bonus fish. Shiners and spawn both attract browns.

This next week should see a lot more movement out over the deep offshore waters, where the very best whitefish action is. If you’ve never done it, consider hooking up with a group to hire a reputable guide. The tips you learn will put a lot more fish on the ice in the future.

For those who’d rather not venture out onto the big water, panfish are available on all the inland lakes, and panfish, pike and trout are in the Ahnapee River.

With only a small number of bow and crossbow deer yet to be added to the totals, Door County and Kewaunee County whitetail hunters have combined to register more than 6,700 deer in the past three and a half months.

That compares to 120 (one buck) during the nine-day Christmas-break gun hunt in Kewaunee County, along with 50 deer with muzzleloader (21 bucks), and 90 during the four-day antlerless season (one buck).

Unless you have access to a crop damage tag, gun deer hunts are over until this fall. However, there’s an extended bow and crossbow deer season in Door and Kewaunee counties until the end of shooting hours Jan. 31.

The late Canada goose season ended Jan. 4, and the wild turkey, pheasant and Zone A ruffed grouse hunts will all close Jan. 9. Gray and fox squirrel hunting is legal through Jan. 31, and cottontail rabbit hunting is permitted until Feb. 28.

As of Jan. 1, Lake Michigan was down 17 inches during the past year, including two inches lower than it was one month ago. Lake levels were still a foot higher than the 100-year average, but 23 inches below the all-time high, set in 1986. The water is expected to drop another two inches in the coming month.