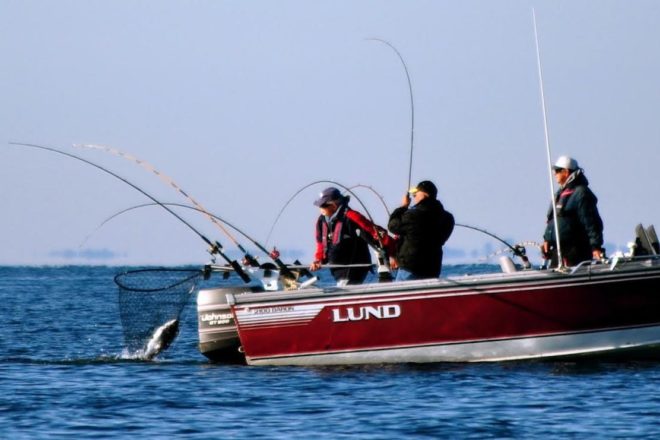 A Chinook salmon comes to the net after a long battle. Photo by Kevin Naze.

Six months into the 2022 fishing season, it’s finally go-time for anglers hoping to tangle with some of the most prized species in the Great Lakes.

Chinook salmon (kings) and rainbow trout (steelhead) were slow to wake up this year, but with water temperatures finally in the prime mid-40s to upper-50s range, things have been heating up this week. Kings and steelhead are the most sought-after salmonids in a group that, locally, also includes brown trout, lake trout and coho salmon.

Mature Chinooks often weigh more than 20 pounds and go on reel-sizzling runs that test even a strong angler’s forearm. Ten-minute battles are common, and 30- to 60-minute fights aren’t unheard of for fish that top 30 pounds.

The two heaviest kings in Wisconsin history were hooked off the Kewaunee/Door County peninsula: A 43-pound, 3-ounce monster off Algoma in 1983, and the current state record, a 47.5-inch, 44.92-pound beast reeled in off Sturgeon Bay in 1994.

Steelhead, meanwhile, are known for their fast runs and acrobatic leaps. The state record – a 42-inch, 27.11-pounder – was caught off Algoma in 1997.

Top-end trophies are great, but numbers are even better. Data compiled by the Department of Natural Resources – required daily charter catch reports, creel surveys at boat landings and a survey of anglers with moored boats – shows that Kewaunee and Door counties produce the most Chinooks and rainbows in Wisconsin.

If you want to get in on the action but don’t have your own boat, consider putting together a group of family members or friends for a charter trip. Dawn and dusk often produce the fastest salmon action, but trout and salmon do strike throughout the day. The average size is often between five and 15 pounds.

Known simply as the K/D to many salmon fanatics, the event is the largest salmon-only summer fishing contest on the Great Lakes, attracting more than 3,000 anglers during each of the past two years. Fishing can be done from shore or from a boat in the Wisconsin waters of Green Bay, and in Lake Michigan waters off Door and Kewaunee counties.

A total of 50 port prizes will be awarded for the heaviest salmon weighed each day at Washington Island, Baileys Harbor, Sturgeon Bay, Algoma and Kewaunee. New this year, Plano XXL StowAway storage boxes will be packed with a $40 gift certificate for gas, K/D clothing and a special 40th-anniversary Howie Fly mixed in with an assortment of tackle from sponsors. Daily winners will also receive an exclusive 2022 port prize winner cap, plus a gift from Flanigan Distributing.

Tickets – $30 for the full tournament, or $20 for a one-day shot – are available at B&K Bait and Tackle at Kap’s Marina on Washington Island; Baileys 57 in Baileys Harbor; JP Express north of Carlsville; Howie’s Tackle & Archery and Greystone Castle in Sturgeon Bay; Algoma BP and JP Express in Algoma; and Accurate Marine, Tackle & Storage and Center Court BP in Kewaunee. All tickets include a random-draw chance for a 9.9 Yamaha outboard motor from Shipyard Island Marina and the K/D committee.

Learn about the history of the K/D, as well as this year’s payout and fishing forecast, on the Door County Outdoors Show on WDOR, 93.9 FM, on Saturday, July 9, 8:30 am.

Elsewhere, the lakewide Salmon-A-Rama runs July 9-17. It’s headquartered in Racine, but you can fish K/D waters and weigh at Accurate Marine, Tackle & Storage in Kewaunee and Howie’s Tackle & Archery in Sturgeon Bay.

Fish Die-off in the Bay

A large-scale fish die-off in the Fox River and lower Green Bay waters is being investigated, though most of the fish – largely a mix of channel catfish, common carp and freshwater drum (sheepshead) – were badly decomposed.

The Department of Natural Resources (DNR) is asking members of the public who see dying or freshly dead fish to alert the department – with an exact location if possible – by email at [email protected] or by phone at 920.662.5480. The DNR recommends that people do not handle dead or dying fish.

Their simple message? You have the power to stop the spread of invasive species to inland lakes and rivers. Volunteers will demonstrate preventive steps that boaters must take before they leave the landing, including draining all water and removing attached plants, tiny animals and mud.

Learn more about the Clean Boats, Clean Waters campaign at dnr.wisconsin.gov/topic/lakes/cbcw, and check out some of the invaders it’s combatting at doorinvasives.org.

As of June 24, Lake Michigan water levels were up two inches from late May but down four inches from last June. Lake levels were 25 inches below the monthly record set two years ago, and 41 inches above the record June low, set in 1964.