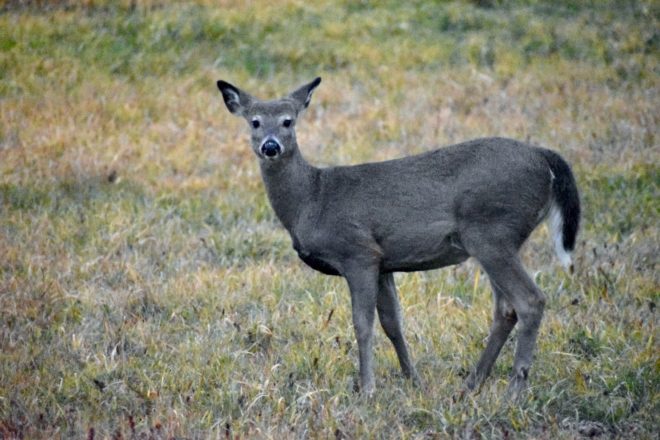 If ever there was a year to escape to the outdoors, this is it. COVID-19 and political bickering have tarnished 2020, filling the airwaves and social-media feeds with conflicting and misleading information. There’s no escape. Or is there?

Some of the best social distancing on the planet is taking place in fields and forests up and down the Kewaunee/Door County peninsula this fall during the ongoing bow and crossbow deer, wild turkey, small game and waterfowl hunting seasons.

Next up is the biggest of them all: the annual, nine-day gun deer opener on Nov. 21.

That means this is your final weekend to sight in your shotgun, rifle, muzzleloader or pistol (yes, a few hunters actually take on the close-range challenge of harvesting a deer with a handgun). With all the wind we’ve had this fall, it’s crucial to check any permanent or portable tree stands to ensure that you’ll be safe ascending, descending or waiting for a shot.

Hunters in the two counties were closing in on 1,500 whitetails registered through early this week. Statewide, the number was approaching 75,000.

As solid as those numbers are, it’ll take only two days for the blaze-orange crew to surpass them. It’s not really all about the kill, but wildlife biologists, farmers, orchard owners, woodland property stewards and motorists are among the many who count on hunters to thin the whitetail herd each year.

By the time the last shot is fired, only about one in six gun, bow or crossbow hunters will have tagged out on an antlered buck, and far fewer on the wall-hanging variety that most dream about taking.

Still, the opportunity for a safe, clean shot will be there for many, especially if targeting a doe or young-of-the-year animal for the frying pan or to donate to the food pantry program.

The Wisconsin Wildlife Federation has added its voice to the U.S. Fish and Wildlife Service’s decision to delist wolves from the Federal Endangered Species List. The rule was published in the Federal Register Nov. 3, and it will take effect Jan. 4.

Former DNR Secretary George Meyer, who now heads up the Wildlife Federation, said the group is a strong supporter of scientifically based professional management of fish and wildlife species.

Meyer noted the gray wolf was removed from the state endangered and threatened list in 2004, and that the Wisconsin wolf population is at least three times over its management-plan goal.

“DNR indicates that this population range understates the true population of wolves in the state,” Meyer said. “In the meantime, wolves continue to cause a high level of depredation of livestock, pets and hunting dogs, causing great concern to farmers, ranchers, other landowners and sportsmen and women.”

The federation is calling on Gov. Evers, Attorney General Kaul and DNR Secretary Preston Cole to vigorously support the decision in federal court if the delisting decision is challenged.

The DNR is working with stakeholders to identify potential projects to restore fish and wildlife habitat in the Lower Green Bay and Fox River Area of Concern (AOC).

In 1987, the United States and Canada designated the area as one of 43 Great Lakes sites with significant environmental damage. Federal Great Lakes Restoration Initiative funding, first authorized in 2010, is helping AOCs to clean up pollution and restore waterways.

The DNR wants to hear about economic and social benefits that the projects might create for communities, as well as other comments. To share your thoughts, email [email protected].

Wisconsin’s annual Keep Wildlife Wild poster contest for fourth-, fifth- and sixth-graders is underway through Feb. 12, with the goal of emphasizing the importance of enjoying and observing wildlife in the wild, and not taking animals out of their natural environment.

The poster entry must contain the words “Keep Wildlife Wild 2021” and follow the theme of the tagline: “A young wild animal’s best chance for survival is with its mother!”

First-, second- and third-place winners will be selected for each grade level. See last year’s winners and learn more at dnr.wisconsin.gov/topic/WildlifeHabitat/orphan.

DNR safety specialists are reminding anglers and waterfowl hunters to wear life jackets, double-check watercraft and watch the weather before heading out this fall.

Wisconsin has had 22 boating-accident deaths so far this year. Of the 20 deaths that were drowning related, 18 of the individuals were not wearing life jackets.