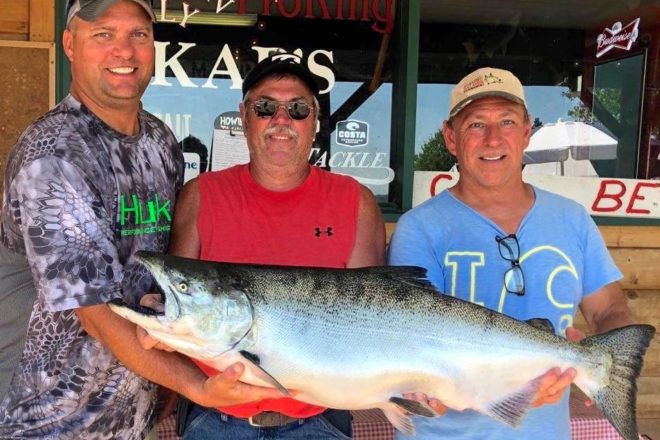 A 30-plus-pound salmon, like this giant caught last year off Washington Island, iss the goal of anglers participating in the K/D Salmon Tournament. Photo courtesy of B&K Bait and Tackle.

“There’s a lot of excitement for the K/D,” said Tom Kleiman of Accurate Marine & Tackle in Kewaunee. “Boat sales are through the roof, and we’re seeing a lot of families coming in. I think in these crazy times, a lot of people are getting back to their roots outdoors.”

The 38th annual Kewaunee/Door (K/D) County Salmon Tournament will run July 17-25, with fishing allowed on both Green Bay and Lake Michigan from the Kewaunee County line to the Wisconsin-Michigan border north of Washington Island.

Kevin Krueger at B&K Bait and Tackle at Kap’s Marina on Washington Island said that when the K/D announced early on that it was a go in 2020, it gave people something to look forward to.

“You’re going to be around people you’re around anyway for the most part,” Krueger said. “People have been cooped up. This gives them a chance to get outside and do something fun.”

Both Kleiman and Krueger said fishing has been very good this summer, with some very big fish. A 35-pounder was weighed at Kewaunee; Sturgeon Bay had a 33-plus; and Algoma, Baileys Harbor and Washington Island all have seen 30-pounders.

“People are snapping off tackle,” Krueger said. “There are some big ones out there.”

Kleiman said, “I think we’re going to see some huge fish this year.”

One of the allures of the contest is that even a beginning angler can get in on the $50,000 in cash and prizes. Unlike the skill needed when finesse-fishing bass and walleyes on structure, there’s a lot of luck involved in trolling a bait past a giant, rogue king salmon suspended over deep Lake Michigan water.

Want to give it a shot? You’ll need a fishing license, a Great Lakes salmon and trout stamp, and an entry ticket. Fish out of your own boat, with a friend, or get a group together to book a charter. All anglers ages 10 and older who are aboard a boat must have a ticket before fishing in the event.

Tickets are $25 for the full tournament or $13 for a one-day chance. They’re available at B&K Bait and Tackle on Washington Island, Jungwirth Ace Hardware in Sister Bay, Baileys 57 in Baileys Harbor, JP Express near Carlsville, Howie’s Tackle and Greystone Castle in Sturgeon Bay, Algoma BP and JP Express in Algoma, and Accurate Marine & Tackle and Center Court Convenience in Kewaunee.

The deadline is July 20 to comment on a U.S. Fish and Wildlife Service (USFWS) proposal to give states, tribes and aquaculture facilities the ability to manage double-crested cormorant populations.

The USFWS would retain the ultimate authority for regulating the take of cormorants, but states and tribes would have the discretion to determine whether, when, where and for what purposes they would conduct lethal take within limits and allocations set by the USFWS.

More than 1,400 comments have been received so far on both sides of the issue. To add yours to the record, visit regulations.gov, and follow the instructions for submitting comments to Docket No. FWS-HQ-MB-2019-0103.

Major League Fishing’s Bass Pro Tour, which ran July 10-15, allowed participants to fish from Algoma to Washington Island, in Green Bay and Lake Michigan, as well as in the tributaries.

The livestreamed event offered anglers a great opportunity to see and hear from 80 of the top bass anglers in the country. Viewers could learn which baits and techniques they used, and in some cases, even figure out where they were fishing if, for example, bridges or the ship canal in Sturgeon Bay were visible.

If you didn’t tune in to MajorLeagueFishing.com, you can still check out the archived highlights. The event will also generate a Discovery Channel television show.

Whitetail fanatics like to scout their hunting ground year-round, and summer is no exception. One of the best ways to deal with summer’s biting bugs, thick foliage and high temperatures is to let cameras and long-range optics do most of the work.

Deer frequent mineral licks during the summer, so they’re popular spots to set up a trail camera. You can also take a ride to glass the fields in your hunt area. Cool evenings after a period of hot weather are the best times to see mature bucks.

To be legal outside of the hunting season here (see dnr.wi.gov/files/PDF/pubs/wm/WM0456.pdf), a mineral lick or feeding site should be within 50 yards of an owner-occupied residence or business, and at least 100 yards from a roadway having a posted speed limit of 45 miles an hour or more.