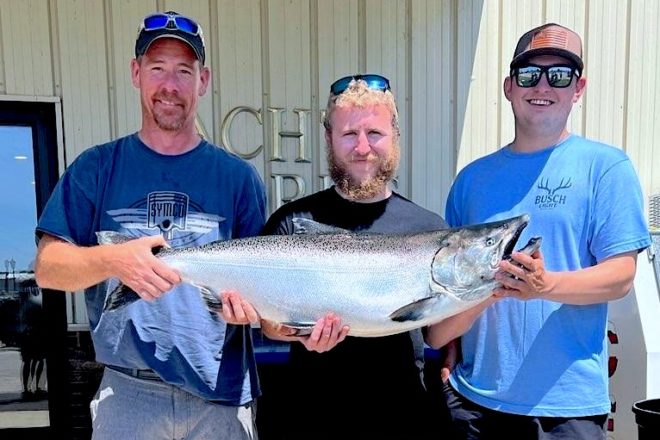 Walker Linssen (center) and Matt Siudzinski (right), both of Green Bay, were guests of boat owner Dennis Oshefsky of Reedsville (left) when this 41-inch, 32.76-pound Chinook salmon smacked a blue-and-silver spoon July 23 fewer than three miles offshore at Kewaunee. It was the largest taken in a record field of more than 3,300 anglers who fished the 40th annual Kewaunee/Door County Salmon Tournament July 15-24. Photo by Yacht Works Kewaunee.

Next Up, Trout Derby and Shanty Days Contest

In his 40 years as president of the committee that runs the Kewaunee/Door (K/D) County Salmon Tournament, Jerry MacMillin of Sturgeon Bay has seen and heard it all.

Big fish spooling an entire reel? Uh huh. Would-be prizewinners straightening hooks or breaking lines? You bet. Anglers landing a fish that could have won or placed very high in the tournament if they’d have purchased a ticket? Sadly, yes.

Fortunately for Walker Linssen of Green Bay, he didn’t let a $30 entry fee stand between him and what ended up being the $15,000 fish in the 40th-annual event, which lured a record of 3,310 anglers this year.

Linssen and fellow Green Bay fisher Matt Siudzinski were aboard a boat owned by Dennis Oshefsky of Reedsville last Saturday when what turned out to be a 41-inch, 32.76-pound Chinook smacked an old, blue-and-silver hammered spoon running about halfway down in 90 feet of water near Kewaunee.

The trio had made plans to go fishing weeks earlier after meeting at a party hosted by one of Oshefsky’s neighbors.

Talk about the ideal “just in case” scenario: The trio now gets to split $15,000 cash, a skin mount of the catch from Twin Rivers Taxidermy and a custom-made, sterling-silver salmon ring with a ruby eye from artist, jeweler and avid angler Paul Spanbauer of Wisconsin Charm.

Second place – good for $8,000 cash and a Howie’s Tackle & Archery prize package – goes to Josh Johnson of Tomahawk. His 41-inch, 32.58-pound trophy smacked a Moonshine spoon out of Baileys Harbor on Day 7.

Finishing in third was Illinois angler Walter Zdaniewicz. His 32.02-pounder also hit a Moonshine the first Sunday morning off a deep downrigger out of Baileys Harbor. He wins $5,000 cash and an Accurate Marine/Yacht Works Kewaunee prize package.

Charles Wagner of Crivitz was fourth with a 31.62-pound salmon taken on a spoon July 21. That one, and the next three spots, were also registered at Baileys 57.

Meanwhile, a 30.17-pounder from Sturgeon Bay took the eighth spot; a 29.73-pounder from Washington Island was ninth; and a 29.55-pounder from Algoma came in 10th.

Three new memorial prizes were added this year: a pair of $300 cash bonuses to the anglers landing in the 49th and 72nd spots, and a $300 cooler for the 19th spot.

Avid South Dakota anglers Glenn and Bryan Sheets had fished the K/D with their dad, Orlando, for more than 20 years. Orlando was born in 1949 (thus the 49th spot), and he died April 6 at the age of 72 (thus the 72nd spot).

Orlando’s grandsons are the third generation of the Sheets family to make the annual pilgrimage to fish in Door County. Bryan said his dad loved the K/D so much that he wanted to be buried in K/D Salmon Tournament clothing.

Meanwhile, Keenan and Kevin Krueger, in memory of their K/D-founding father, Will, gave a $300 cooler to the angler landing in the 19th spot. The 80-year-old “Kap” was born Dec. 19, 1941, and he died Jan. 10 of this year. The donation was on behalf of three of their businesses: Kap’s Marina, B&K Bait and Tackle (Barb and Kevin Krueger), and DoCo-Local, all on Washington Island.

SIM and the K/D teamed up on a 9.9 Yamaha motor, which was awarded by random draw at the wrap-up meeting Tuesday night. To see who the lucky winner was – and scroll through the entire list of lucky anglers – visit facebook.com/kdsalmon2022.

More trophy chinooks were registered off Kewaunee and Door counties July 15-24 than were put to scale during the lakewide Salmon-A-Rama (SAR), which had 11 weigh-in sites in three states July 9-17.

Although the K/D had more 30-plus-pounders (eight versus six) and bigger fish throughout the payout, SAR did have a larger winner for one of the few times in history. Even more amazing, the 34.94-pounder was landed from a kayak out of Port Washington.

Next up in the area is the Marinette-Menominee Brown Trout Derby July 30-31, and Algoma’s Shanty Days Fishing Contest Aug. 11-14.