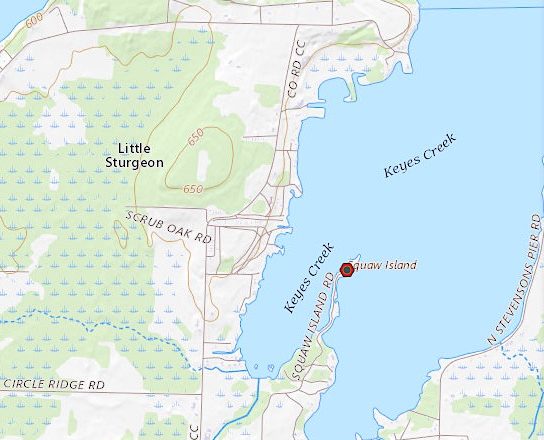 Little Sturgeon’s colorful history may see another chapter written soon as a popular island is slated for a new name.

Squaw Island, located in the south-central portion of Little Sturgeon Bay, is one of 28 geographic features in Wisconsin identified by a U.S. Department of the Interior task force as having a derogatory name. The area surrounding the island is a favored spot for anglers seeking yellow perch, smallmouth bass, walleye and northern pike.

Interior Secretary Deb Haaland – the first Native American to serve as a Cabinet secretary – signed an order last November declaring “squaw” a derogatory term and implementing procedures to remove the word from use on federal geographic features and lands. A check online found 28 Wisconsin geographic features with the word, including 11 Squaw Creeks and seven Squaw Lakes. They are located in 17 counties, most in the northern and central forest regions.

The Department of the Interior is seeking public comment on replacement names through April 25. You may submit comments online through the Federal eRulemaking Portal at regulations.gov/search?filter=DOI-2022-0001, or mail comments to Reconciliation of Derogatory Geographic Names, MS-511, U.S. Geological Survey, 12201 Sunrise Valley Dr., Reston, VA 20192.

All submissions must include the docket number DOI-2022-0001, and all comments received will be posted without change to regulations.gov, including any personal information provided.

Finding It Hard to Find Ammo?

If you’re a hunter or recreational shooter who’s struggling to find your favorite ammunition, you’re not alone.

The National Shooting Sports Foundation (NSSF) says the economic impact of the firearm and ammunition industry increased from $19.1 billion in 2008 to $70.52 billion in 2021 – a 269% increase.

Joe Bartozzi, NSSF president and CEO, said the growth of firearm and ammunition manufacturing shows that this industry continues to meet the American demand for lawful firearm ownership.

“These new gun owners are increasingly representative of Americans from all walks of life, including more women and more minority communities that have decided to exercise their right to keep and bear arms and to safely enjoy the recreational shooting sports,” Bartozzi said.

Bass Tournaments Are On

The two largest bass-fishing tournaments in Door County are set for the same week, but they’re planned for days apart next month.

Gary Nault is bringing back the Sturgeon Bay Bass Tournament’s catch/weigh on the water/release format again this year, but moving it to a Monday and Tuesday.

Nault said opening weekend is not the time for a major tournament, and the second weekend – May 13-14 – is the Sturgeon Bay Open Bass Tournament.

Find out more about Nault’s event at sturgeonbaybasstournament.com, and the Cabela’s North American Bass Challenge’s Sturgeon Bay Open at sbobt.org. You can see a list of all the state events that have applied for a permit so far this year at dnr.wisconsin.gov/topic/Fishing/tournaments.

Hunters and anyone else interested in deer management may comment on proposed season structures and antlerless permit levels starting next week, when there will be a two-week window to comment before County Deer Advisory Councils (CDACs) meet again in late April to make final recommendations. Find the link soon at dnr.wisconsin.gov/topic/Hunt/cdac.

Trout Tournaments Are On

After a calm start to the week, wind is likely going to be a major factor in this weekend’s Baileys Harbor Brown Trout Tournament. The event began Thursday and will run through Sunday morning. Track the daily reports at facebook.com/BaileysHarborBrownTrout.

Meanwhile, a 50-team tournament is set for April 23 at Kewaunee. Find out whether there are still openings by calling Merrick Malach at 920.366.7706 or emailing [email protected].

Citizens may weigh in on more than 60 questions from the DNR, Conservation Congress and Natural Resources Board, as well as citizen-submitted resolutions. Results are nonbinding and advisory only. Find a link to vote at dnr.wisconsin.gov/about/wcc/springhearing.