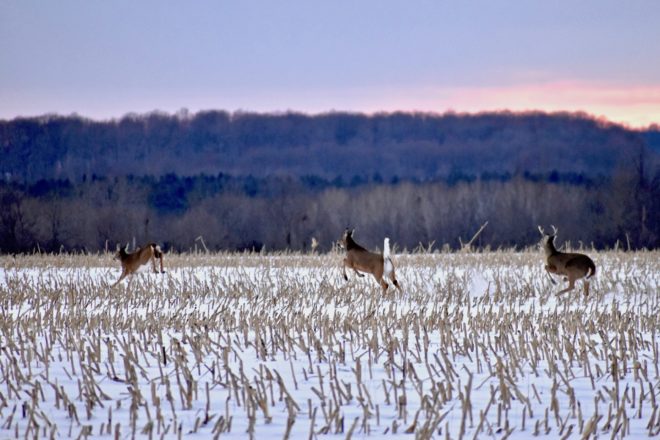 A trio of whitetails – one buck still carrying its antlers and two others likely already shed – broke away from a large group of antlerless deer in southern Door County last week. Photo by Kevin Naze.

Heading into March, the Winter Severity Index (WSI) – an algorithm used by the Department of Natural Resources (DNR) to predict the impact of winter weather on deer survival – was in the mild category in all but Wisconsin’s five northernmost counties.

Although the WSI can’t gauge the effects of freezing rain and crusted snow, it has been used for decades to track days with 18 inches or more of snow depth and the number of days when temperatures were at zero or below. Each individually can add one point, for a maximum of two points daily.

Through February, only Douglas, Bayfield, Ashland, Iron and Vilas counties had racked up more than 50 points. Seventeen others had between 40 and 49.

Mercer topped the recording sites with 75 points, followed by Gile, 69; Pence, 67; Saxon and Trout Lake, 56 each; and Glidden, Park Falls and Pattison, 54 each. Brule was next at 52; Eagle River and Woodruff both had 51; and Barron, Cornucopia and Gordon had 50.

Kewaunee and Door counties hadn’t even hit 20 points, guaranteeing excellent carryover and another bumper crop of healthy fawns this spring.

Statewide, the last very severe winter was in 2013-14. Winters have been mild five times since, as well as moderate three times, from late 2017 to early 2020.

If you had a hard time seeing deer during the hunting season, now’s the time to take a late-afternoon drive in farm country. Whitetails will be very visible all month, congregating in large numbers in fields with hay, clover, winter wheat or other grasses. Those groups will break up and scatter once things green up.

No More Online-Only for Young-Hunter Education

The all-online hunter-education course option for those younger than 18 that the DNR had been offering during the COVID-19 pandemic will end March 20 at midnight, so those students will have through March 20 to complete it.

Adults ages 18 and older will continue to have online-only as a hunter-education course option through with the student studies, completes modules and passes a final exam to become certified. This option is a good fit for adults who have a connection within the shooting-sports community to help establish and strengthen their skills and lessons learned virtually.

Traditional classes offer a more hands-on approach to working with a certified hunter-education instructor, and there’s also the option to train online, then finish with a field day.

Anyone born on or after Jan. 1, 1973, is required to have a hunter-education certification to purchase a hunting license unless she or he is hunting under the Mentored Hunting Law. More than 20,000 people take hunter-education courses in Wisconsin each year.

Learn more about the DNR’s safety education for hunting, boating, snowmobiling, ATV use and off-highway motorcycling at dnr.wisconsin.gov/Education/OutdoorSkills/safetyEducation.

Red-winged blackbirds, sandhill cranes, American robins and common grackles are among the birds that were seen in the area during the past week, but bluebirds have migrated back into southern Wisconsin. That means now’s the time to clean out old nest boxes or put up new ones. It’s also a good idea to rake up old seed and droppings around bird feeders and to clean and disinfect the feeders themselves.

DNR biologist and avid birder Ryan Brady said migration activity will heat up and cool down with the weather, now through at least mid-May. Report observations and track what others are seeing at ebird.org/wi.

As of March 4, Lake Michigan’s water levels were down 17 inches in the past year and 28 inches since the all-time monthly high was set in March 2020. Water levels had fallen another inch during the past month, but they may have risen after heavy rain and melting snow flooded tributaries over the weekend.

Despite the rapid drop during the past 24 months, lake levels were still eight inches above the 100-year average and three feet above the all-time low set in 1964. Levels are expected to rise an inch or more by early April.

• Ice shelters may be used on Green Bay waters through March 13; after that, shelters must be removed daily when not occupied or in use.

• A clarification on last week’s column: Resident first-time anglers and those who haven’t purchased a license in at least a decade may purchase a fishing license for $5; nonresidents who qualify may purchase one for a reduced rate of $25.75.