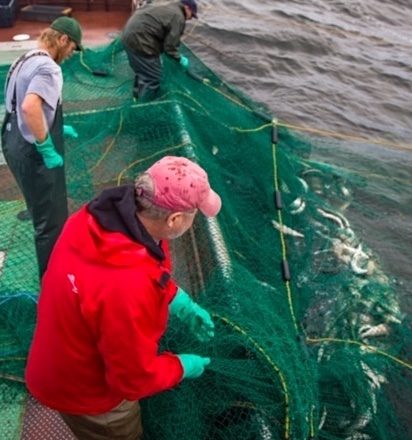 Charlie Henriksen of Sister Bay (in the red jacket) helped hold a net packed with whitefish on the waters of Green Bay. Henriksen Fisheries has been netting fresh Lake Michigan whitefish and producing boneless fillets for Door County businesses – and markets across Wisconsin and the nation – since 1979. Photo courtesy of Henriksen Fisheries.

Henriksen, president of the Wisconsin Commercial Fisheries Association, said Department of Natural Resources (DNR) staff changes, funding issues and COVID-19 issues have delayed something that should have happened years ago.

“This increase is long overdue,” Henriksen told board members via Zoom on April 14. “There’s plenty of fish for everybody, and the lake is big enough for everybody.”

Brad Eggold, DNR Great Lakes District fisheries supervisor, said the rule takes a very conservative approach and requires the use of an electronic fish-reporting system – something Henriksen and other large producers have been using for several years.

“The data and the science is going to be produced, and it’ll continue to be produced into the future,” Henriksen said. “That’s what we’re about. We’re producing the data, and the transparency is immense. Anyone who wants to come check it out or ride along is welcome to do that.”

Henriksen said commercial netters are funding the addition of a Limited Term Employee (LTE) for the DNR this year to make sure there’s enough onboard monitoring.

The LTE and a UW-Green Bay graduate student have already been monitoring gill net and trap net boats – an effort to record any bycatch (sub-legal whitefish and all other fish species). Although it’s been mainly whitefish, a few walleyes, perch, freshwater drum and burbot have been seen recently.

“Multiple commercial fishers are participating in the fourth season of monitored fishing in Green Bay,” Henriksen said after the meeting. “We believe that this study will show that there is very limited bycatch in this important fishery.”

Eggold said the increased quota would reserve 2,000 pounds for assessment work, with the remainder split between the commercial and sport fisheries – about 1.76 million pounds for each. Of that, an additional 207,603 pounds of commercial whitefish quota would be added to the 362,185 already allocated for Zone 1.

“The parking lot is full of guys going sportfishing for walleyes, for bass or for perch,” he said. “We talk to them all the time. The people who are on the ground right there, intermixed with us at the dock, are separated from us on the lake. We seldom see a boat near us when we’re fishing.”

“We supply everyone in Wisconsin with this renewable resource,” he said. “We hope as we move forward that we get some credit for that.”

The driving force behind the plan, Henriksen was part of the meeting discussion for more than half an hour. The emergency rule comes up at the 3:04 mark, and Henriksen is on beginning at the 3:23 mark. You can dig deeper into the data and discussion at dnr.wisconsin.gov/about/NRB. Click on the NRB webcast from April 14.

Andre Sharpe’s 36.5-inch, 29.05-pounder caught off Sturgeon Bay on April 15 was the heaviest during the three-day Baileys Harbor Brown Trout Tournament. The catch earned him $1,000 and a $500 Door County vacation package.

Twenty-one of the top 40 fish were weighed at Baileys 57 in Baileys Harbor, 10 at Howie’s Tackle in Sturgeon Bay and nine at Hooked Up Tackle in Algoma.

A number of game-fish seasons open this weekend, but some remain closed and others are catch-and-release only. Sort it all out with a careful review of the 2021-22 fishing regulations, available in hard copy at licensing agents or online at dnr.wisconsin.gov/topic/Fishing.

Meanwhile, we’re into the second of six seven-day spring wild turkey hunting periods. Each runs Wednesday – Tuesday, and hunters need a tag for that specific time period. All turkeys taken must be registered by 5 pm the day after recovery at gamereg.wi.gov or by phone at 844.426.3734.

As of April 23, Lake Michigan was 22 inches above its 100-year monthly average, but 14 inches below last year’s monthly record. Water levels are projected to rise two inches during the next month.

This Site Is for the Birds

After a warm start to April, a steady diet of mostly northerly winds really slowed bird migration, but things will improve with each southerly blow. Track sightings at ebird.org/wi/home.