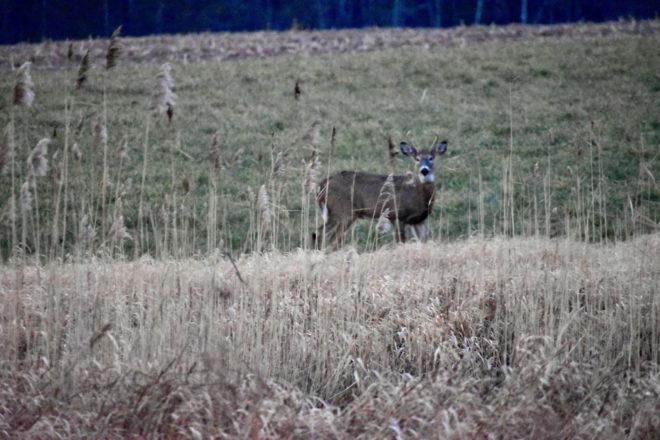 A young whitetail buck pauses before high-tailing it for cover after discovering the photographer late Nov. 22. Photo by Kevin Naze.

10-day muzzleloader season is up next

What a difference a year makes.

Disgruntled hunters lambasted Department of Natural Resources (DNR) wildlife staff last fall after a triple whammy produced the fewest gun deer whitetails since 1981. The latest possible gun deer opener in 2019 meant the rut was largely over; strong winds affected movement; and a record year of precipitation altered access to swamps and marshes, and it kept farmers from harvesting more than a million acres of corn.

All those deer saved by the massive increase in hideout acreage are showing up in a record start to the bow and crossbow season. Although this column was written prior to the DNR announcing opening-weekend numbers, there’s little doubt that 2020 will see a major increase in the harvest.

For the first time in years, the weather was nearly perfect: cool, clear and calm both Saturday and Sunday, and there was a light cover of snow across parts of the north.

Taxidermists are reporting a big increase in trophy racks – a sign that more mature bucks than usual survived last season – and deer processors are swamped.

Through mid-November, arrow and bolt hunters had combined to smash the previous total record bow buck harvest. The numbers included 33,452 bucks and 22,491 antlerless with crossbow, and 24,725 bucks and 17,148 antlerless with archery gear. Combined, the 58,177 bucks were 3,797 more than crossbow and bow hunters registered by the end of last season.

Along with 7,464 deer harvested during the youth gun hunt in October, the total kill through Nov. 15 stood at 105,280. To put that into perspective, that’s more whitetails than state gun hunters took in six straight seasons, 1969-74.

Heading into opening weekend, hunters had trimmed more than 2,200 deer from Kewaunee and Door counties.

Deer by the Numbers

One hundred years ago, the estimated deer kill in Wisconsin was about 20 times smaller than it is today. By 1921, the harvest had slipped to 7,000 whitetails. Things were so bleak that starting in 1925, hunting was allowed only in alternate years for the next decade.

Numbers fluctuated after that, often depending on how severe the winter was. In 1995, gun hunters registered 398,002 deer, and archers took a record 69,269. Good thing, because the winter was very severe, and many whitetails perished.

Of course, even then there were hundreds of thousands of hunters who didn’t get a deer. It’s the nature of the beast, often dependent on the quality of the habitat, hunting pressure and knowledge of the hunter.

As impressive as the record numbers were, they were unsustainable. Northern forest habitat was decimated by too many deer: They literally ate themselves out of overwinter browse in some areas.

Meanwhile, the forests matured. With fewer deer, predation by wolves, coyotes and black bears became a much bigger factor in some areas. Even so, habitat, hard winters and hunters choosing to pull the trigger play the largest roles in most regions.

All deer must be registered no later than 5 pm the day after recovery. You can do that on the Hunt Wild app, online at GameReg.WI.gov or by calling 844-GAME-REG (844-426-3734). You’ll need your harvest authorization number. If you don’t have it, get it from your Go Wild account.

Proof of license and harvest authorization is needed while afield. That can consist of a paper copy, a PDF displayed on your phone, a Wisconsin driver’s license or a Go Wild Conservation Card.

Muzzleloader Season Up Next

The gun hunt will end Nov. 29, except in metro units, where it will run through Dec. 9. Elsewhere, the muzzleloader deer season will be Nov. 30-Dec. 9, and the four-day antlerless gun deer hunt will be Dec. 10-13.

To find out more about all the 2020 deer seasons, visit dnr.wisconsin.gov/topic/hunt/deer.