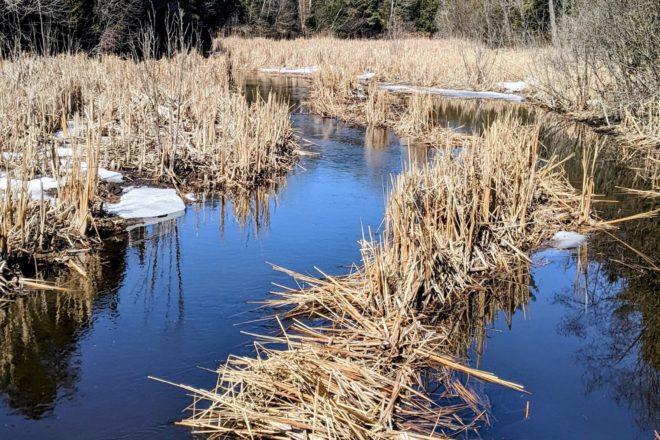 Whitefish Bay Creek had shed most of its ice and snow by March 20, the first day of spring. Rain since then has raised the flow of lakeside rivers and creeks, luring the initial wave of spawn-minded suckers and rainbow trout. Smelt – if any show this season – will likely not be far behind. All three species spawn in early to mid-April. Photo by Kevin Naze.

That’s the deadline for the Great Waters Photo Contest, too

Don’t be a fool by going fishing on April 1 without first purchasing a new-for-’22 license.

Although it’s true that Department of Natural Resources (DNR) conservation wardens can use discretion when deciding to issue a citation or a warning, fishing without a license isn’t one of those times when you’re likely to catch a break. Residents and nonresidents aged 16 and older are required to purchase a license in order to fish.

There are many license options, from Conservation Patron to first-time buyer to husband-and-wife, but the most popular is a resident or nonresident fishing license. Don’t forget to purchase a salmon and trout stamp if you’ll be targeting those on the Great Lakes or their tributaries. Review license options at gowild.wi.gov or wherever licenses are sold.

New 2022-23 regulations are also now available in booklet form at license agents or online. Find out more at dnr.wisconsin.gov/topic/Fishing.

April 1 is the deadline as well to submit entries for the DNR’s 2022 Great Waters Photo Contest in four categories: people enjoying the water, natural features, wildlife, and historical or cultural features. Check out the rules and instructions at dnr.wisconsin.gov/topic/GreatLakes/Contest.html.

The State of Farms …

Wisconsin has about 14.3 million acres dedicated to agriculture, an industry that provides about 11.8% of the state’s employment opportunities, 435,000-plus jobs and more than $100 billion for the state’s economy.

Many hunters receive permission to pursue deer, turkeys, geese and other wild game on farmland, but those opportunities are sometimes lost when smaller farms are developed or larger farming operations buy them up.

The Department of Agriculture, Trade and Consumer Protection has produced the most recent two-year report on the status of the Farmland Preservation Program. It includes farmland availability and conversion trends, tax-credit claims data, and trends related to agricultural enterprise areas, conservation compliance and farmland preservation planning, zoning and agreements.

The number of farm operations decreased nearly 10% from 2011 (71,200) to 2020 (64,400). Additionally, during the past three years, the Public Service Commission has received applications to start construction on 12 solar facilities, which will require more than 20,000 acres of land to site the principal infrastructure.

Meanwhile, the Wisconsin Council of Forestry has posted a summary of landowner and stakeholder group discussions on the future of Wisconsin’s forest-products economy.

The state’s forest industry provides more than 60,000 jobs and has a total output of about $25 billion. There are roughly 17 million acres of forest land, which cover about 46% of the state’s total area.

Listening sessions and the report are part of a broader effort that the council is engaged in, along with multiple partners, to develop actionable, collaborative forestry initiatives to support, develop and diversify a sustainable forest-products industry. Find a link to the report at councilonforestry.wi.gov.

The effort comes after a California federal court judge last month ordered that Endangered Species Act protections be restored for wolves in most of the U.S., effectively prohibiting lethal control.

In a statement, Baldwin said she’s supported efforts to delist wolves in Wisconsin since 2011 because of the scientific conclusion that the population has recovered in the Great Lakes region.

Johnson agreed, saying that state wildlife agencies should manage the recovered population so the wolf’s ongoing role in the ecosystem does not come at the expense of farmers, loggers, sportspeople and those who simply live in areas where they’re prevalent.

Meanwhile, U.S. Congressman Tom Tiffany introduced H.R. 286 – the Managing Predators Act – more than a year ago, on Jan. 12, 2021. The bill would permanently remove gray wolves in Wisconsin, Michigan, Minnesota and Wyoming from the federal endangered and threatened species list and give states the authority to manage wolves at or above a population goal established by the state. It was referred to the Subcommittee on Water, Oceans and Wildlife a month later, but no action has been taken.

“The sad reality is that a hearing is unlikely unless Democrats in the states impacted by gray wolf populations speak up,” Tiffany said. “It is going to require serious engagement by Sen. Baldwin to get her Democratic counterparts and the Biden Interior Department to act.”

During the Obama administration, Sen. Jon Tester, a Democrat from Montana, persuaded Senate leadership to pass legislation to delist the wolf in his state, as well as in Idaho.

The first Great Lakes fishing contest of spring is set for April 7-10 in Door and Kewaunee counties. New this year, the Baileys Harbor Brown Trout Tournament is offering daily port prizes and more than $8,000 total in cash and prizes for the four-day event. To learn more, check out the event’s Facebook page, or visit baileysharbor.doorcounty.com.