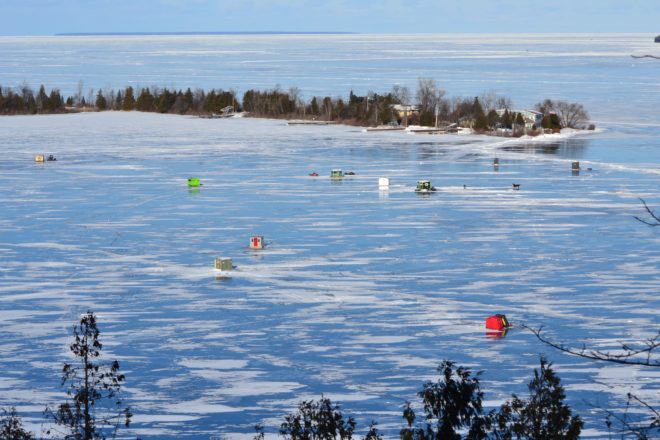 Ice shanties on Green Bay in 2018. Photo by Tim Sweet.

The first single-digit temperatures of the season Tuesday put a thin skin of ice on some area fishing holes, but it’s nowhere near safe yet.

It’s a different story in the far northern reaches of the state, where anglers have been able to walk on protected bays the past two weeks.

High temperatures in the mid- to upper 30s are back in the forecast, with the possibility of low to mid-40s a couple days next week. The 15-day forecast showed highs above freezing until the Christmas break. It’s quite likely, then, there won’t be much happening before the new year.

Some anglers have been casting the open waters of the Ahnapee River between Algoma and Forestville. The northern pike bite was very good, with some trophy-size fish reported along with numerous smaller fish. One large pike, caught by Dennis Andre of Algoma, had 50 tiny crappies in its stomach! The photos can be seen on the Algoma, Wisc. Fishing Facebook page.

The river has also been producing a few brown trout, rainbow trout and holdover coho salmon. Try casting spoons, spinners or stickbaits for mixed bags of pike and trout.

Meanwhile, if you’re reading this hot off the press, the deadline to apply for spring wild turkey and fall black bear permits is 11:59 p.m. Friday, Dec. 10. If you missed it for bear, you’re out of luck. However, if you forgot to apply for a turkey tag, leftovers will be served sometime in March.

On the hunting scene, the muzzleloader deer season wrapped up Wednesday, and a four-day, antlerless-only gun deer hunt ends Sunday, Dec. 12. Archers and crossbow users can go back to full camo Dec. 13-Dec. 23, then break out the blaze orange again Dec. 24-Jan. 1 during another antlerless-only gun deer hunt. Camo returns the remainder of January for an extended bow and crossbow hunt in Door and Kewaunee counties.

The six goals of the Act are:

• Minimizing the impacts of contaminants on fishery and wildlife resources.

• Protecting, maintaining and, where degraded and destroyed, restoring fish and wildlife habitat, including the enhancement and creation of wetlands that result in a net gain in the amount of those habitats.

Supported in part by the Great Lakes Restoration Initiative, the agency expects approximately $1.8 million to support proposals this fiscal year.

Since 1998, this program has supported anglers across the Great Lakes through projects like wetland restoration and the detection of lake trout spawning in the wild.

This legislation would provide assistance to Great Lakes fish and wildlife agencies to encourage conservation, restoration, and management of the fish and wildlife resources and their habitats by reauthorizing $6 million annually through 2027 to implement projects and USFWS activities of regional importance to the Great Lakes.

I tuned in to the DNR’s Bear Advisory Committee meeting via Zoom Dec. 1, listening for more than four hours as a diverse group of stakeholders discussed nuisance bear issues, research, regulations and quotas.

As stated above, the deadline to apply for 2022 black bear permits or preference points is 11:59 p.m. Friday, Dec. 10 (same as spring wild turkey permits). See the new zone map and learn more about black bear management in Wisconsin at https://dnr.wisconsin.gov/topic/hunt/bear.