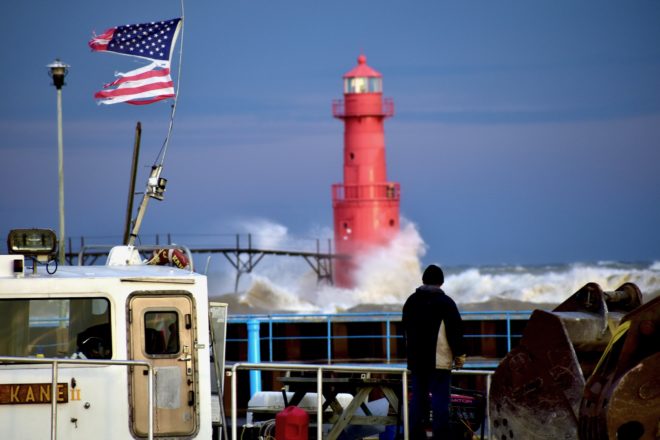 An employee of Iron Works Construction of Baileys Harbor watched as a wave smashed into the Algoma Pierhead Lighthouse Oct. 31. He was aboard the tugboat Kevin C. Kane after it broke from its mooring inside the Algoma Marina during a fierce Halloween gale. READ MORE AT THE END OF THE STORY. Photo by Kevin Naze.

After a sub-par, nine-day November gun deer harvest last season – much of it blamed on the latest possible opener and less-than-ideal conditions – whitetail fanatics are hoping the gun hunt is on target with the early bow and crossbow results.

Through late October, both the local and state reported harvest numbers were up more than 20 percent from last year. As of Oct. 26, Door County deer hunters had registered 689 whitetails, including 360 with crossbow, 208 with vertical bow and 121 in the youth gun hunt. The Kewaunee County numbers were 279, 188 and 109, respectively, for a peninsula total of 1,265.

The annual whitetail rut, or mating season, is underway. That means deer are often on the move day and night. Motorists, beware!

Gray wolves will lose protections under the Endangered Species Act early next year, offering additional lethal control options to states that are experiencing losses of livestock, pets and wildlife.

State and tribal wildlife management agency professionals will resume responsibility for management, and the Fish and Wildlife Service will continue to monitor the species for five years to ensure continued success.

Lawsuits are expected, and some believe it’ll take legislative action – as has been done in some western states – to allow state agencies to effectively manage their wildlife.

The final rule will be effective 60 days after publication in the Federal Register, which was expected this week.

Wisconsin had a minimum estimate of nearly 1,200 wolves last winter: more than three times larger than the state’s minimum population goal. New pups from nearly 250 packs have since been added.

As of mid-October, wolves in Wisconsin had attacked at least 44 cattle (mostly calves, but some steers, heifers and cows); 44 dogs; 40 laying hens; 13 sheep; 11 horses; three lambs and an alpaca. There were 28 hunting hounds killed by wolves and 12 more wounded, along with four pet dogs killed.

In addition, there were 11 verified complaints of wolf harassment to livestock, pets and hunting dogs, along with five confirmed human health and safety complaints. Thirty other depredation complaints could not be confirmed.

The group learned that the Department of Natural Resources (DNR) planned to split its first Lake Michigan brook trout stocking in a decade – about 50,000 St. Croix strain fish – at only two ports, Milwaukee and Manitowoc, this fall and again in 2021.

That didn’t sit well with some anglers, including Tom Kleiman of Kewaunee, who runs Accurate Marine & Tackle. He was the driving force pushing for stocking “coaster” strains of brook trout. The DNR said it could switch to coasters (the Tobin Harbor strain) in 2022. Coasters are so called because they typically forage near shore.

The U.S. Fish and Wildlife’s Matt Kornis also gave a presentation on lake trout that found 38 percent of angler-caught lakers were wild (not stocked) fish.

The DNR and UW-Stevens Point are collaborating on a research project led by the U.S. Geological Survey concerning waterfowl and waterfowl hunting on Green Bay and Lake Michigan.

Which issues should the DNR focus on during the next three years to protect water quality in lakes, streams and rivers? You can provide input on 15 topics to help the agency choose five top priorities. The DNR is accepting comments through Dec. 4 and will hold a virtual public hearing Nov. 16 online or by phone. Learn how to participate at dnr.wisconsin.gov/topic/SurfaceWater/TSR.html.

Wild Ones on the Door

Crossroads at Big Creek in Sturgeon Bay will host Don Gustafson of the Wild Ones Door County Chapter on Nov. 7, 10:30 am, for a seed-collection workshop. He will also host a virtual presentation on pollinator gardening via Zoom on Nov. 11, 2 pm. Get details at doorcountylibrary.org/pollinator_gardens.

As of Oct. 30, Lake Michigan was still 31 inches above its 100-year average, but 10 inches shy of the monthly record, set in 1986. The lake was down two inches from late September and is expected to drop another three inches during the next month.

The largest trade show of its kind – the Shooting, Hunting and Outdoor Trade Show – is another victim of COVID-19. It had been planned for Jan. 19-22 in Las Vegas.

MORE ABOUT THE PHOTO

Iron Works owner Mike Cole bought the former New York City fireboat – named for an NYC firefighter who died in the line of duty – three years ago. It was a key responder during the “Miracle on the Hudson” emergency plane landing in 2009, and it also responded to the 9/11 terrorist attacks on the World Trade Center in 2001.

For a great story on how Cole brought the boat to Door County, read “New Duty for the Kevin C. Kane” at doorcountypulse.com/new-duty-for-the-kevin-c-kane-nyc-fireboat-being-converted-in-baileys-harbor. Photo by Kevin Naze.