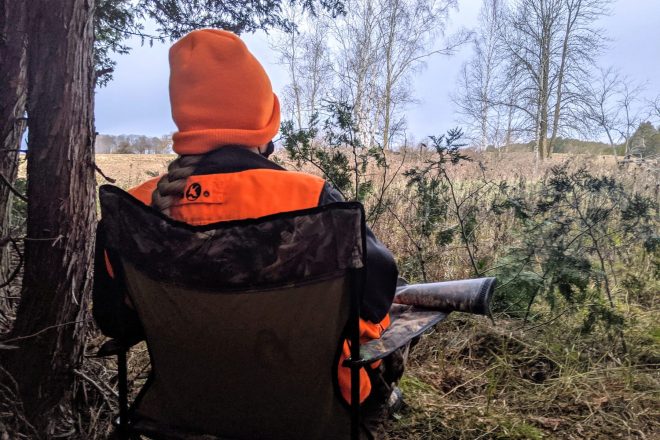 All was quiet along the edge of a Kewaunee County cedar swamp when this picture was taken Nov. 20, 6:51 am, on opening morning of Wisconsin’s annual gun deer hunt. But about a half hour later, things changed in an instant when a buck suddenly appeared. Karina Naze – a UW-Madison senior who was home for her first deer hunt since high school – was up to the challenge, making a perfect shot on a seven-point buck. Photos by Kevin Naze.

If you’ve yet to pull the trigger on a chance for some venison steak, stew meat or hamburger, you’re in good company. Social-media feeds stacked with photos of successful hunts are fun to look at, but they don’t necessarily paint an accurate picture on what’s happening across the county, region or state.

In fact, only about one of every six gun deer hunters fills a tag most years. Take out legal group-hunting success stories – multiple deer shot by the same person but registered by others within voice or visual contact – and that number is even smaller.

Some of it is by choice. A lot of today’s hunters are quite selective about what they will or won’t shoot. Many pass all young bucks, and some refuse to target antlerless deer. Others, however, would gladly take almost any whitetail, if only one would provide them with a good opportunity.

Whether or not it was a “good” season might depend on whether a deer showed up in the right place at the right time, but one has to wonder how many digitally distracted hunters missed a fleeting opportunity because they were on their phones?

As always, opening weekend produced a vast mix of experiences, from the ultimate high to complete boredom. There were tales of the first deer, the biggest bucks and the most deer ever seen during a single sit. There were also plenty of stories of whitetails pulling a no-show.

If things haven’t improved by the time you’re reading this, don’t give up. Plenty of hunting opportunities remain. The nine-day gun deer hunt is immediately followed by a 10-day muzzleloader hunt (or seven more days of firearm deer hunting in metro sub-units, including Brown County’s), and a four-day, antlerless-only gun hunt in Door and Kewaunee county’s farmland zones.

If you can’t fill a firearm tag by the end of shooting hours Dec. 12, there will be one last shot for antlerless deer during the holiday hunt Dec. 24 – Jan. 1. Meanwhile, bow and crossbow deer hunting remains open through Jan. 31 in both Door and Kewaunee counties, which are participating in an either-sex extended bow and crossbow deer season.

Statewide, there were nearly 88,000 deer taken through Nov. 15, including nearly 49,000 with crossbows, nearly 34,000 with bows and more than 5,000 in the youth gun hunt. That combined number was more than doubled in just the first two days of the gun deer hunt, and it will likely approach 300,000 by the end of November.

Jeff Pritzl, a Department of Natural Resources (DNR) Deer Program specialist, said the buck harvest was trending above the five-year average in all deer-management zones, but he said the gun-season stats may not track the same.

“We will likely see the effects of hunter behavior and effort shifting toward seasons outside the nine-day,” Pritzl said.

If you have more deer than you need, consider donating a whole carcass to Wisconsin’s Deer Donation program, which benefits food pantries.

If you want to participate in monitoring for chronic wasting disease, you can drop off deer heads to self-serve kiosks at the Sturgeon Bay DNR Service Center, Peninsula State Park, Door County Rod & Gun Club or Kewaunee’s Harbor Express.

• Hunters should register their deer by 5 pm the day after harvest online or by phone at 844.426.3734. Hunters who forget should still complete the process to provide the most accurate data possible.

• First Harvest and First Experience certificates can be printed at dnr.wi.gov/fhc.

• The Deer Hunter Wildlife Survey is open until Jan. 9 at dnr.wisconsin.gov/topic/WildlifeHabitat/wlsurvey.html.

Lake Michigan, already down 17 inches during the past year, is expected to drop another two inches by late December. Although it’s still 17 inches above the 100-year average and 44 inches above the all-time low, set in 1964, the lake is down two feet from the monthly record, set in 1986.