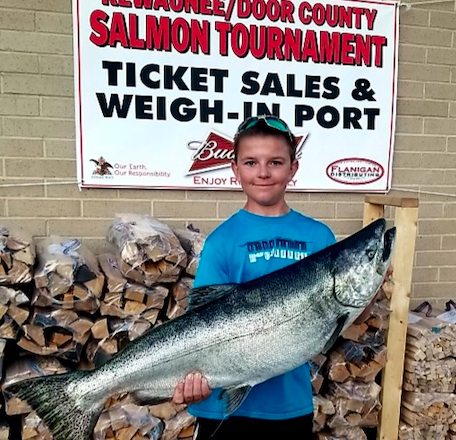 Leaders can change very quickly, but as of early Tuesday morning, a Brussels youth, Devin Buhr, had taken the early lead with a 30.49-pounder caught opening day while fishing with his family and friends on their boat out of Algoma. Photo courtesy of Algoma BP.

Anglers are coming from near and far to participate in the 38th annual Kewaunee/Door (K/D) County Salmon Tournament, which will wrap up its nine-day run Saturday night.

Leaders can change very quickly, but as of early Tuesday morning, here’s how things stood: A Brussels youth, Devin Buhr, had taken the early lead with a 30.49-pounder while fishing with his family and friends on their boat out of Algoma.

The second-heaviest fish as of early Tuesday was a tie between Craig Dailey of Huntsville, Alabama; and Cory Schneider of Luxemburg, both with 29.44-pound Chinooks. Dailey’s was hooked Monday night with Capt. Dave Heath out of Jackson Harbor on Washington Island. Schneider was fishing with friends on a private rig out of Algoma early Tuesday. Tournament rules state that in the case of a tie, the higher place goes to the earlier weigh-in.

Strong winds, storms and fog made it rough on anglers at times during the first three days, and more favorable conditions could produce some major lead changes at the top by the time this issue goes to press.

Although the number of entrants won’t be known until the tournament is over – tickets are on sale throughout the event at nine outlets from Kewaunee to Washington Island – it’s possible the 2020 event could challenge the all-time high of more than 3,000 sold. Boat launches have been packed, and several businesses have asked for extra books of tickets to sell.

See the pictures of all the giants, and keep up with the leaderboard changes at facebook.com/kdsalmon2020.

And what will the winning weight be in 2020? We’ll know soon!

It might surprise Great Lakes anglers to know that lake trout are considered an aquatic invasive species in many western lakes, including Yellowstone Lake, where contracted gillnetting has cost the National Park Service more than $20 million to remove nearly 3.5 million lake trout since the mid-1990s. Lakers caused the native Yellowstone cutthroat population to crash, and the battle rages on.

Now think about smallmouth bass, one of Door County’s iconic species. Imagine considering them invasive. Well, they are – at least in Oregon. Using bait, spears and spear guns are all allowed to harvest smallies in Oregon’s Coquille River system this summer through Oct. 31 because of a temporary rule aimed at reducing the effects of illegally introduced smallmouth bass on native Chinook salmon.

Coquille adult fall Chinook returns were extremely low in 2018 and 2019, and Oregon Department of Fish and Wildlife staff reviews showed that the illegally introduced smallmouth bass were partly to blame for the poor returns.

Anglers are being encouraged to catch and remove as many smallmouth and striped bass as possible from the river, and the state is developing plans to conduct additional removal methods to reduce predation on juvenile Chinook salmon and other native species.

If you purchased a Conservation Patron, Sports or any other license that allows deer hunting, you can now print out your free farmland antlerless tags.

If you do both gun and bow or crossbow hunting, you can get up to 10 free tags for Door County, or eight for Kewaunee County. Other farmland counties vary from one to four, depending on what that county’s Deer Advisory Council chose.

You’ll need to go to your account on the DNR’s Go Wild site to select the unit and land type (public or private, and you can mix and match). If you need help, you can have the tags printed for a small charge wherever licenses are sold.

A total of 2,000 bonus fall wild turkey harvest permits will go on sale Aug. 15 at 10 am. You no longer need to apply for a tag to draw for the fall hunt; just purchase a license, and if you didn’t purchase a spring license, you’ll also need to buy a wild turkey stamp privilege.

You can see a list of where the tags are for the quota units – and what day and time they will go on sale – at dnr.wi.gov/Permits/bonusavailability.html.

If you’ve completed a hunter-education course online and still need to fulfill the field-day requirement, there’s one coming up Aug. 1 at the Door County Rod and Gun Club near Sturgeon Bay.

Learn about hunter education and other safety-course requirements by clicking the links at the DNR’s licensing and information site, gowild.wi.gov.