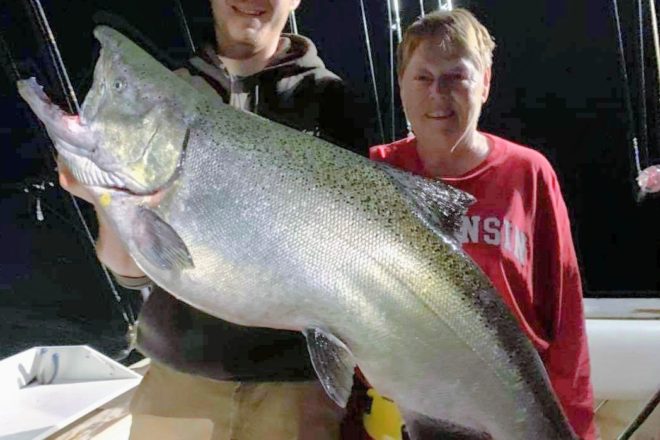 On the eve of her 71st birthday, Susann Jacques of De Pere reeled in this 35-pound, 10-ounce Chinook salmon from Lake Michigan off Algoma. Caught on Monday – fewer than 76 hours prior to the start of the 39th annual Kewaunee/Door County Salmon Tournament – it would have been big enough to win all but five times in the event’s history. First mate Mason Ravet of Luxemburg held the trophy king salmon after an hour-long battle during which the rod changed hands three times. Photo courtesy of Outcast Sport Fishing.

For the second straight week, a trophy Chinook salmon with a Luxemburg connection was boated on Lake Michigan. And for the second week in a row, it was hooked between Sturgeon Bay and Algoma.

It appears there’s something in the water this year: big fish. Six days after a 32-pound-plus giant was landed on a Sturgeon Bay charter boat captained by a Luxemburg man, lightning struck again.

Susann Jacques of De Pere received a heck of an early birthday present Monday while aboard the Outcast, a sportfishing charter boat at Algoma captained by Chris Kadletz of Luxemburg.

On the eve of her 71st birthday, Jacques was the third and final person on the rod during an hour-long battle that resulted in a 35-pound, 10-ounce giant of a Chinook hitting the deck.

The fish is thought to be the heaviest of the season so far in the north half of the lake, trailing only a couple of south-central giants: a 37-pounder off Milwaukee and a 39-pounder that won a tournament off Muskegon, Michigan.

Kadletz said the salmon smacked a Moonshine spoon off a downrigger, screamed out two football fields’ worth of line and then settled into an extended game of tug-of-war.

It had a missing adipose fin, meaning it was a stocked – not naturally reproduced – salmon.

That’s something new that the Kewaunee/Door County Salmon Tournament committee will be tracking this year: the number of trophy fish with and without adipose clips.

More than a decade of study by the U.S. Fish and Wildlife Service and the Wisconsin, Michigan, Illinois and Indiana Departments of Natural Resources has found that more than half of the Chinooks swimming in the lake are naturally reproduced. But, because many of them are coming from Lake Huron and the Michigan side of Lake Michigan, those trophy fish tend to leave Wisconsin waters at some point as they instinctively seek their natal streams.

That’s one of the reasons why Wisconsin charter captains pushed so hard for reducing lake trout stocking in favor of more Chinooks, knowing how important that species is to attracting visiting anglers come the late-summer staging.

Salmon ‘Run’ Is On

Several thousand anglers from across the country are expected to participate in the 39th annual Kewaunee/Door County Salmon Tournament, which began a nine-day run under a full moon at 12:01 am Friday.

Had it been hooked during the event, Susann Jacques’ catch may have taken home the top prize of $10,000 cash, a free mount of the catch by Twin Rivers Taxidermy and a sterling-silver salmon ring by artist Paul Spanbauer of Wisconsin Charm.

All told, more than $50,000 in cash and prizes is on the line, including 45 daily port prize packages worth more than $5,000 combined. Those are for the heaviest Chinook weighed daily at B&K Bait and Tackle at Kap’s Marina on Washington Island, Baileys 57 in Baileys Harbor, Howie’s Tackle in Sturgeon Bay, Algoma BP in Algoma, and Accurate Marine & Tackle in Kewaunee.

Those five – plus JP Express north of Carlsville, Greystone Castle in Sturgeon Bay, Jandu Petro BP 24/7 in Algoma, and Center Court Convenience in Kewaunee – are official ticket outlets. The cost is $25 for two or more days of participation, or $13 for a one-day shot.

All ticket buyers are entered in a drawing for a 9.9 kicker motor courtesy of Shipyard Island Marina and the tournament committee. Other local sponsors include Flanigan Distributing, Fishin’ Magician Charters, Kinn’s Sport Fishing and West Marine.

Get daily tournament updates at facebook.com/kdsalmon2021.

during the 38 years of the Kewaunee/Door County Salmon Tournament:

The Bay Bite Is Solid

Although having a shot at $10,000 is certainly exciting, big-lake trolling is not for everyone. That’s why the Kewaunee/Door peninsula is such a great spot. From the Kewaunee County line at Dyckesville on up to the west tip, there’s some very good mixed-bag action going on in Green Bay waters right now.

Smallmouth bass and yellow perch are everywhere. Many perch are running six to seven inches, but eight- to 12-inch fish are available, too, if you search enough. A 15-inch giant even ended up on the scale at Howie’s Tackle & Archery in Sturgeon Bay last week.

For walleyes, the most consistent fishing has been in the lower stretches – especially from Dyckesville to Sand Bay – but there are some real giants on offshore reefs all the way up to Sister Bay.