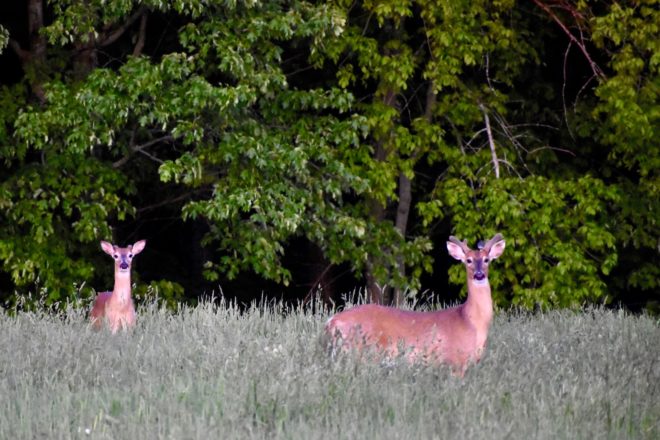 A pair of young whitetail bucks foraging in a hay field south of Sturgeon Bay offered a fleeting opportunity for a picture before they bounded off into the forest last weekend. Photo by Kevin Naze.

Whether you’re casting the Green Bay shoreline, bobber-watching on an inland lake or trolling the vast waters of Lake Michigan, there’s something fishy about the Kewaunee/Door County peninsula.

On Green Bay, that means a nice mix of smallmouth bass, rock bass, yellow perch, northern pike and walleye; on the inland lakes, there are plenty of hungry panfish; and on Lake Michigan, some impressive trout and salmon await, such as a pair of 31-plus-pound chinooks weighed last week at Howie’s Tackle in Sturgeon Bay.

If you want in on some of the action but don’t know where to start, a visit to bayside bait shops or Howie’s should rank high on your list. Staff members can give you helpful tips on what to use and where to start.

One of the best times to be on the water on the inland lakes and Green Bay is early in the morning, when recreational boating traffic is much lighter. You’ll find mixed bags in the bay and harbor weed beds, around popular reefs and even over deeper mud bottoms.

Dawn and dusk are prime times for trophy kings on Lake Michigan. In between, rainbow and lake trout have been providing the most consistent bite.

Tickets for the 38th annual Kewaunee/Door County Salmon Tournament, set for July 17-25, are hot off the press and available this weekend at B&K Bait and Tackle at Kap’s Marina on Washington Island, Jungwirth Ace Hardware in Sister Bay, Baileys 57, JP Express on Highway 42 between Carlsville and Egg Harbor, Howie’s and Greystone Castle in Sturgeon Bay, Algoma BP, and Accurate Marine & Tackle and Center Court Convenience in Kewaunee.

Wisconsin had 82 accidents, including nine with fatalities and 37 with nonfatal injuries (52 total injured). Total property damage was nearly a half million dollars.

Alcohol continued to be the leading known contributing factor in fatal boating accidents in 2019, accounting for more than 100 deaths nationwide. Operator inattention, improper lookout, operator inexperience and excessive speed were other primary contributing factors in accidents.

Where the cause of death was known, 79 percent of fatal boating accident victims drowned. Of those drowning victims with reported life-jacket usage, 86 percent were not wearing a life jacket.

The Coast Guard reminds all boaters to enjoy the water responsibly: wear a life jacket, take a boating-safety course, attach the engine cut-off switch, get a free vessel safety check and boat sober. Anyone born on or after Jan. 1, 1989, is required to complete a boating-safety course to legally operate a motorized boat or personal watercraft on Wisconsin waters.

To review all of the 2019 recreational boating statistics, visit uscgboating.org/statistics/accident_statistics.php.

By a 73-25 vote, the U.S. Senate last week passed the Great American Outdoors Act, which would fully fund the Land and Water Conservation Fund and tackle a huge maintenance backlog currently facing our public lands. Introduced in March, the act would provide full and permanent funding for the Land and Water Conservation Fund (LWCF) at $900 million annually and address the $19 billion maintenance backlog on public lands.

The LWCF, created in 1965, provides funding for land and water conservation, outdoor recreation and historic-preservation projects. The fund is not tax-funded; rather, it’s funded by royalties collected from offshore oil and gas operations.

Identical legislation was introduced in the House of Representatives, and President Donald Trump has vowed to support bipartisan legislation to fully fund the LWCF.

Boaters should be aware of ongoing enforcement by the DNR and Coast Guard for safe and responsible boating on Green Bay and Lake Michigan. Efforts will increase July 3-5 during the busy holiday weekend.

Operation Dry Water is a nationwide campaign focused on education to reduce boating under the influence. Impairment can lead to slips, falls overboard and other accidents that cause preventable injuries and deaths.

As of June 19, Lake Michigan was 35 inches above its 100-year monthly average, four inches higher than last year and four inches above the previous record, set in 1986. Water levels were up 66 inches from the record monthly low, set in 1964.