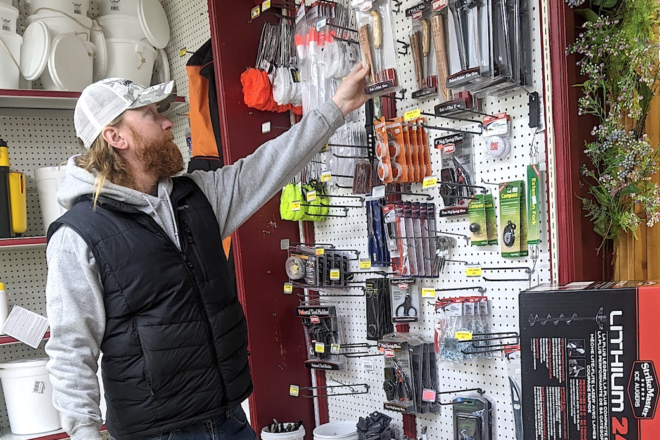 Stangel takes over at Stephenson Pier

Some of Travis Stangel’s earliest fishing memories involve playing in the snow on the frozen waters of Green Bay and chasing tip-ups whenever a flag popped.

“My dad had me out there when I was real young – three extra lines, you know – and I could probably set a tip-up when I was four years old,” said Stangel, who today is an accomplished tournament angler, fishing guide and the new owner of the Stephenson Pier Sport & Gift Shop in Little Sturgeon.

The 38-year-old Sturgeon Bay High School graduate said he grew up near Haines Beach on Rileys Bay and often walked out onto the ice when his dad was working. Locals would drill holes for him or even invite him into their shacks to fish.

After nearly four decades of ownership, Roger and Shirley Cherney turned the Stephenson Pier mini-mart over to Stangel and his wife, April, on Dec. 1.

“Technically my wife and I both own it, but she said, ‘This is my [Travis’] baby,’” Stangel said. “I’m looking to expand the tackle end of it a bit and bring some fresh ideas into the station.”

The lower end and west shore of Little Sturgeon Bay are always among the first spots to offer walk-on fishing each winter, and last week’s frigid air helped to make ice fast.

“Getting an early start is an incredible boost for business,” Stangel said. “That jump-start is nice to see after warmer weather the last few years.”

Milder air that moved in late this week shouldn’t hurt the solid start inside Little Sturgeon, but it won’t help anglers who are hoping to explore the deeper water.

Many ice shacks and even some four-wheelers were seen inside Little Sturgeon Bay on Tuesday, but a large crack with open water was still visible between Henderson Point and Snake Island.

“Obviously you have to be careful yet,” Stangel said. “You can’t just go out anywhere. But guys say they’re finding four to eight inches of ice where they’re fishing” inside Little Sturgeon Bay.

Stephenson Pier was open for business on Christmas, when it nearly sold out of minnows.

“It was bucket after bucket coming in and going out,” Stangel said. “We had to triple our order from last week.”

Stangel is friends with the co-owners of Howie’s Tackle in Sturgeon Bay. Lance Lavine is his golf partner, and if Stangel needs a high-speed fix for bass, he might hop into Adam Neu’s boat.

“They’ve helped me out a lot,” Stangel said.

Asked whether he anticipates running the business for decades like the Cherneys did, Stangel said, “We’ll see what the future brings. I plan on being here for a while to see what we can do to slightly improve what was already a great thing here.”

Stangel and his wife have a son, Quintin, who’ll be 3 in March.

Meanwhile, duck hunting is closed for the season, but an extended opportunity for locally raised Canada geese runs through Jan. 3 in the Southern Zone.

Wild turkeys are legal through Jan. 8 in Zones 1-5. That’s the same end date as the pheasant and Zone A ruffed grouse seasons.

Seven timber companies and four conservation organizations have joined together to fight the spread of chronic wasting disease (CWD) among deer and elk.

The new coalition will promote practices that help to discover, manage and mitigate the negative impacts of CWD. The most recognizable name among the group’s members is the Boone and Crockett Club.

“These private landowners bring a vital push to the nationwide effort to control chronic wasting disease,” said Tony A. Schoonen, chief executive officer for the Boone and Crockett Club. “CWD is deadly to wildlife, deeply concerning to hunters and conservationists, and still a challenging mystery.”

CWD is contagious, fatal and transmitted freely within cervid populations. No treatments or vaccines are currently available. No known transfer of CWD to humans has occurred, but the continued expansion of the disease negatively affects the economic, environmental and cultural values associated with deer and deer hunting.

The cost of $99 per person includes lunch and a raffle. The event is sponsored by Smokey’s on the Bay. Learn more and register at captaindankeating.com.