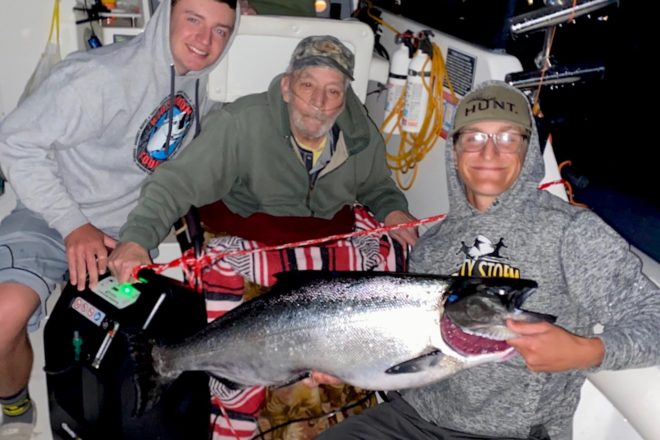 Three generations of the Sheets family from South Dakota fished the Kewaunee/Door County Salmon Tournament this year, including the patriarch, Orlando (center); with grandsons Parker and Russell. Photo courtesy of Bryan Sheets.

With a record 3,290 participants in the recent Kewaunee/Door (K/D) County Salmon Tournament, there’s bound to be a few fish stories, right? Trophy-size chinooks certainly play a role in those tales, but it’s not just the big catches that create lifetime memories.

Bryan Sheets of South Dakota said his group of eight includes three generations of anglers and several who join in just to shop and sightsee. How the Sheets family ended up bringing its boat and cash to Door County every summer for the past 22 years is a story in itself.

Sheets said that nearly four decades ago, his grandparents paid a quarter so that he and his brother, Glenn, could go on a guided trip on a New Jersey reservoir with a bunch of other kids.

“The second guide overslept and did not pick up the other kids, so our guide took my brother and me by ourselves,” Sheets said. “On the way, he was gracious enough to pick up our dad, who was fishing from shore at the time. Lo and behold, we caught the biggest fish that we had ever seen.”

By the next week, the Sheets family had its own boat.

“We fished for years with my grandparents in that very same boat, catching some big trout,” Sheets said. “For my eighth-grade graduation, my grandparents and dad chipped in so we could take a salmon charter out of Lake Ontario. The first fish on the rod was a 28-pound king. Let’s just say that from that point on, we were hooked.”

Sheets’ dad, Orlando, then invested in a bigger boat with all the trolling gear necessary. Together they’ve fished for salmon all over the country, including in Lake Ontario, Fort Peck in Montana, and the Missouri River and Lake Sakakawea in North Dakota.

“Here we are, five boats later,” Sheets said. “Lake Michigan is our favorite. Four generations and 22 years fishing the K/D has brought us together in a way that I can’t put into words. The memories created for our family are priceless.”

Sheets said his boat-owning brother is the driving force behind the annual trips.

“God bless my brother for the huge heart he has,” Sheets said. “He hasn’t reeled in a fish in years. He gets so much out of it seeing people reel in salmon.”

And the group always seems to cash a check. This year the group’s members placed two fish in the money, at 46th and 68th.

“Years of experience,” Sheets said. “Trial and error. There were days in the tournament when we didn’t get a bite. You just have to trust your gut and keep working.”

Meanwhile, Kelly Ostrowski of Tomahawk was part of a group of nine from Tomahawk, Stevens Point, Amherst and Marshfield.

“This was our 10th year fishing the tournament,” she said. “[My goal] and my husband’s goal is to share it with the young kids and help carry on the fun and excitement for the next generations.”

Her then-13-year-old son, Jeren, placed fifth last year with a 32.06-pounder. This year, “Uncle Steve” Schulfer of Amherst finished 59th with a 25.46-pound chinook, and Ostrowski hooked a personal-best 21-pounder.

“It took all four of us in the boat to catch that one,” she said. “Everything that could’ve gone wrong did. We did a Facebook Live video. Watching it gets the excitement going all over again. My daughter helped me hold the pole tight, and we collapsed at the end once the fish was netted and in the boat.”

She said the group was already planning for next year before this year’s trip was over.

“The vacation gets long and so exhausting, but the need for excitement and adventure keeps us coming back year after year,” Ostrowski said. “We also share the experience with Grandpa Dewey (Duane Miskulin of Stevens Point), who is 80 years old. He takes every single chance he can get to get out on the boat.”

The group’s members watch the wind and trailers around the peninsula, often fishing out of Rowleys Bay, Baileys Harbor or Gills Rock. Depending on the waves, they may put in on one side and have Ostrowski drive the truck and trailer to pick them up on the other side.

Jeren invited a friend this year, and the boys got up every morning at 3:30 am. On the last day, they fell asleep on the bow of the boat and were so exhausted that they never heard the cries of “Fish on! Fish on!” as two others brought fish in.

Shanty Days was a victim of the coronavirus, but anglers of all ages can still participate in the multispecies “Shanty Daze” fishing tournament throughout Kewaunee County through Aug. 9 at 10 am.

Quote of the Week

Boat owner Dick Franke, who helped friend Keith “Buck” Felhofer to a fourth-place, 31.23-pound chinook out of Baileys Harbor: “You had to watch out. Every time you got near a rod, Buck would push you away.”