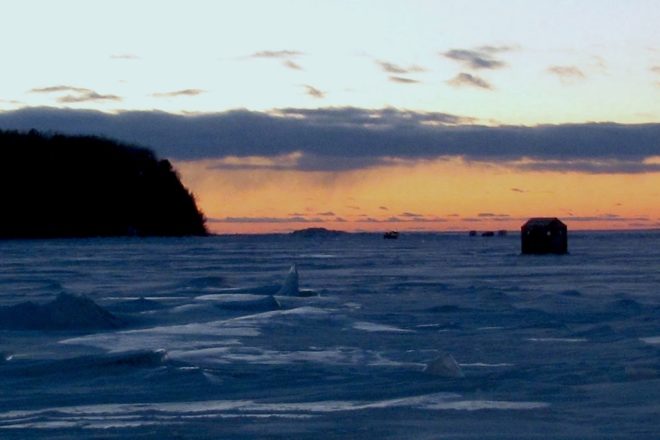 A Door County sunset on ice. Photo by Kevin Naze.

U.S. and Canadian scientists will join thousands of ice anglers on the frozen waters of Lake Michigan and other Great Lakes next week.

While fishers will be trying to hook the catch of the day, more than two dozen researchers will be drilling through the ice of all five Great Lakes and Lake St. Clair to collect water samples, measure light levels and net zooplankton as part of a first-of-its-kind midwinter snapshot to better understand the ice, water, nutrients and lake biology.

During what’s known as the Winter Grab, the scientists will use a mix of foot power, snowmobiles, all-terrain vehicles and an airboat to move across the ice, collecting samples at up to 30 locations, including the frozen waters of Green Bay. It’ll happen during the week of Feb. 14 – a date that has historically marked peak ice cover on the Great Lakes. Some researchers may even catch rides aboard U.S. and Canadian Coast Guard icebreakers.

Funding is largely coming from the University of Michigan’s Cooperative Institute for Great Lakes Research, a partnership with the National Atmospheric and Oceanic Administration.

During recent decades – with few exceptions, such as the brutally cold winter of 2013-14 – there’s been a significant decrease in the extent and duration of Great Lakes ice cover. Researchers will wear flotation suits or life jackets when on the ice and carry ice picks to be used for self-rescue in the event that they fall through.

The Beach Harbor Resort is sponsoring an ice-fishing contest for whitefish, perch, northern pike and walleye Feb. 12-13. The $20 tickets include a coupon for one pizza. No tickets will be sold after 2 am Saturday.

More than $1,500 in prizes are on the line, with additional draw prizes. Each angler may enter no more than one fish per category; no pre-fishing is allowed; and no frozen fish will be accepted. Find out more at doorcountyicefishingtournament.com.

Next weekend (Feb. 18-21) is the Great Backyard Bird Count (GBBC), a citizen-science opportunity to flock with hundreds of thousands of other birding enthusiasts and report what you’re seeing.

To get ready, attend a free webinar Feb. 16, 1 pm, to brush up on bird identification, unlock the mystery of bird songs and practice counting birds, no matter how large the flock or how busy the feeder.

Data gathered during the GBBC helps scientists to track changes in the numbers and distribution of wild birds over time. Get details about the count and find a link to the free webinar at birdcount.org.

Meanwhile, birders can share sightings and photos, see what others are reporting, scour data and check out hot spots from around the state at ebird.org/wi/home and wsobirds.org.

The County Deer Advisory Councils of Door and Kewaunee counties have chosen the same dates for their spring meetings: March 23 to set preliminary recommendations and April 27 for final recommendations.

Door County’s meeting will begin at 6 pm, Kewaunee County’s at 7 pm, and they’re expected to be virtual for the third straight year. Phone numbers and pass codes will be announced prior.

Deer metrics will be updated by mid-March for review before to the first meeting, and the public will be able to provide feedback for a week in mid-April before the final meetings. Learn more at dnr.wisconsin.gov/topic/Hunt/cdac.

You can give back to nature by donating to the Endangered Resources Fund on your Wisconsin income-tax form. The spot is on Form 1, line 20a. For part-year/nonresidents filing Form 1NPR, it’s on line 53a.

The fund helps to support conservation efforts for rare plant and animal species, including some found in Door County’s wetlands and forests. Donations are tax deductible and matched dollar for dollar. Tax-form donations have helped to restore bald eagles, trumpeter swans and osprey and have kept more than 400 other endangered wildlife species and 300 plant species from vanishing. Donations to the fund are no longer used for wolf-management purposes.

A second edition of Become the Arrow: The Art of Modern Barebow Shooting has been released by famed archery trick shot and skilled bowhunter Byron Ferguson.

There’s a new chapter on target panic, detailing how Ferguson had it and beat it, and how you can, too; an expanded photo display of big game taken with his longbow; and a section on his international shooting performances and the awards and honors he’s earned.

The heart of the 142-page paperback – learning to “become the arrow” – is unchanged from the first edition. The cost is $14.95 plus shipping and handling, and the book is available at targetcommbooks.com.

Saturday, Feb. 12, is opening day of the sturgeon-spearing season on Lake Winnebago for those who purchased tags by the deadline, and for those whose names were drawn for a coveted upriver lakes tag.

Aaron O’Connell, a Department of Natural Resources sturgeon-habitat biologist, said visibility varies across the system, but it’s generally pretty good. Track the harvest or sign up for daily updates at dnr.wisconsin.gov/topic/fishing/sturgeon/WinnSysSturgeonSpear.html.

Lake Drops 19 Inches in a Year

Lake Michigan was still nine inches above its 100-year monthly average, and 37 inches above the February low, set in 1964.