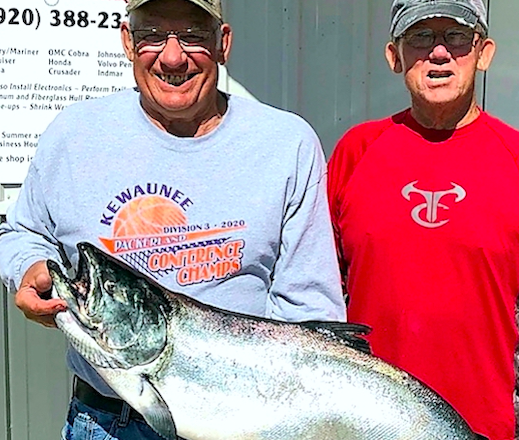 Brought together by their teetotaling ways, friends Angelo Bortolini (left) and Harold Shaw had other anglers raising a toast in their honor after they double-teamed this 41-1/2-inch, 32.78-pound chinook off Kewaunee early July 21 to win $10,000 and other prizes in the Kewaunee/Door County Salmon Tournament. Photo courtesy of Accurate Marine & Tackle.

Angelo Bortolini might want to get his son, Scott, an extra Christmas present this year. Scott introduced his father to Harold Shaw, a fellow teetotaler, about a decade ago.

Fast forward to Tuesday morning, July 21, when the 77-year-old Bortolini and his 74-year-old friend – who owns the boat they were on four miles east of Kewaunee – tied into what turned out to be the 13th-biggest winning chinook in the 38-year history of the Kewaunee/Door (K/D) County Salmon Tournament.

“Oh, man, I’ve been sweating a bit,” Bortolini said upon getting the congratulatory call after the K/D committee met Monday night.

He and Shaw are planning to split the top prize of $10,000 in cash, and Bortolini will get the fish mounted by Twin Rivers Taxidermy and receive a custom-made, sterling silver salmon ring with a black diamond eye by artist Paul Spanbauer of Wisconsin Charm.

“I’m going to Iowa deer hunting, so I figure that’ll be a good use of it,” Bortolini said when asked how he plans to use his share of the prize money.

The duo left the dock around 3 am and started setting lines in about 100 feet of water. The trip started slowly but changed just before sunrise.

“That fish hit, and man, it started taking out line,” Bortolini said. “I would say I hung on for about 25 minutes. All of sudden a charter boat came right across the back, and I told Harold to turn into him so he had to turn out, and he did. We were sweating.”

So how was Shaw’s net performance?

“OK,” Bortolini said. “He didn’t get it on the first swipe, though. Once it was in, he said, ‘I can’t lift it! I can’t lift it!,’” so I threw down the rod, and we both pulled it in. I was so charged up I could have lifted a whale at that point.”

Sturgeon Bay sold the most tickets: Howie’s Tackle & Archery and Greystone Castle combined for 985. Algoma BP and JP Express in Algoma combined for 948. There were 1,689 tickets sold in Kewaunee County and 1,601 in Door County, but anglers could fish off any port on the peninsula.

Breaking a streak of Northern Door wins, Algoma and Kewaunee fish combined to take seven of the top 11 spots, including the second-place catch, a 40-1/2-inch, 31.58-pounder caught by Todd Smith of Brussels. That fish hit a Howie Fly hours before sunset off Algoma on July 23. Smith’s great catch earns $6,000 in cash and a Howie’s Tackle & Archery prize package.

A third two-in-a-boat combo to score big was Jesse Picard of Little Suamico and his girlfriend, Maddie Jorgenson. The 39-1/2-inch, 31.35-pounder they caught hit a Moonshine spoon about an hour after sunrise off Kewaunee on July 22. Their dawn date results in a $4,000 payday and a $200 shopping spree at Accurate Marine & Tackle in Kewaunee.

The committee used the record ticket sales to boost the dollar amounts for the top 20 percent of the places this year, but it still paid down 146 spots. Any fish 23 pounds and heavier made the final payout.

Combined with the daily port prizes, K/D awards and sponsor prizes, more than $55,000 in cash and prizes will be shared among the winners. After expenses, the remainder of the proceeds from this year’s contest will be banked to make sure that the 39th annual event – set for July 23-31, 2021 – will have a solid foundation.

• Howie Flies and Moonshine lures were the most-listed baits on tournament weigh-in sheets, including eight of the top 10 fish.

• Sixteen of the heaviest 25 chinooks – including eight of the top 10 – were caught Monday through Thursday. Thirteen were hooked in the afternoon (two) or evening (11), and 12 in the morning. The best times were 5:30-7:30 am and 8-8:30 pm; two were hooked mid-morning, and two others mid-afternoon.

• Chris Anonen of Big Lake, Minnesota, won the 9.9 Yamaha outboard motor donated by Shipyard Island Marina and the K/D tournament; Brian Gabriel of Marinette was the winner of a drone for the early-bird prize.

• The top 64 chinooks all weighed more than 25 pounds. That’s down from last year’s amazing 148 25-plus kings, but still above the long-term average.

To find out more about the tournament, visit facebook.com/kdsalmon2020.

Shanty Days was a victim of the coronavirus, but the annual fishing tournament will still be held Aug. 5-9. The multispecies event will feature a $2,000 payout, thanks in large part to some very generous donations for the youth portion of the contest.

A Great Lakes commercial fishing update is among the agenda items about which the public may submit written comments in advance of the Aug. 12 state Natural Resources Board (NRB) meeting. Charlie Henriksen, chair of the Lake Michigan Commercial Fishing Board, will be among those featured, and the public can watch the online webcast of the meeting. Another agenda item concerns streamlining and simplifying the 2020 hunting regulations pamphlet.

The deadline for submitting written comments is Aug. 5, 11 am. Find out how to submit comments or watch the Aug. 12 proceedings at dnr.wi.gov/about/nrb.

Aug. 1 is the deadline to apply for the upriver Winnebago system sturgeon-spearing system, as well as a chance for a bobcat, fisher or otter permit.