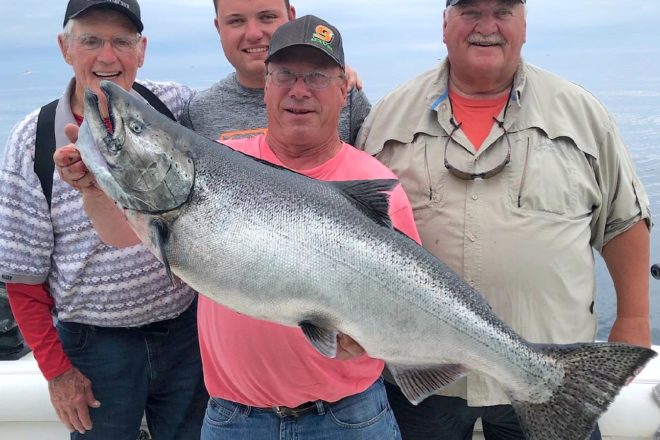 Thousands of anglers from across the country are expected to participate in the 39th annual Kewaunee/Door (K/D) County Salmon Tournament, which will begin its nine-day run July 23.

Luxemburg charter captain Pat Veeser watched customers reel in the second-heaviest Chinook he’s had on his boat in more than three decades on Tuesday morning, July 13, on Lake Michigan between Sturgeon Bay and Algoma.

“The good ol’ times are back,” said Veeser, captain of Top Banana Charters in Sturgeon Bay.

Veeser and first mate Evan Torgerson of Eau Claire helped 86-year-old Merle Muench of Minnesota and 70-year-old Brian Pauling of Oklahoma double-team the 32-pound king salmon early Tuesday. When reached shortly after 8 am, the group already had 17 fish in the cooler and were battling two more during the conversation.

The trophy salmon smacked a spoon set behind 10 colors of leadcore off a planer board. Muench held on for as long as he could before passing the rod to Pauling.

A regular in the K/D tournament, Veeser said he’s excited about the potential for some real giants this year.

“It was painful what the DNR did to cut back [on stocking years ago to allow baitfish to recover], but the rewards are being seen now,” he said.

More than $50,000 in cash and prizes are on the line, including major prizes from local sponsors Howie’s Tackle, Fishin’ Magician Charters, Kinn’s Sport Fishing and Shipyard Island Marina. Tickets are $25 per person or $13 for a one-day shot. Get the latest news at facebook.com/kdsalmon2021.

At more than 95,000 square miles and an estimated six quadrillion gallons of water, the Great Lakes make up the largest body of fresh water on Earth.

The Straits of Mackinac connect Lake Michigan and Lake Huron. There is such a steady flow of water between these two that they could be considered one lake. Lakes Erie and Ontario are connected by the Niagara River, including Niagara Falls. The St. Lawrence River connects Lake Ontario to the Gulf of St. Lawrence, which leads out to the Atlantic Ocean.

The Great Lakes have an amazing number of islands – more than 35,000 in all – but many are small and uninhabitable. The largest, at 1,068 square miles, is Lake Huron’s Manitoulin Island, which is also the largest on any inland water in the world.

Lake Michigan, derived from the Ojibwa word “mishigami,” meaning “large lake,” is actually the third largest of the Great Lakes, at about 22,300 square miles when measured by water surface. The water flows in an unusual way, moving slowly in a circular pattern. It’s the only Great Lake located entirely in the United States.

Many experts consider Lakes Michigan and Huron two halves of one body of water, and the U.S. Army Corps of Engineers, in its weekly Great Lakes water-level report, lists the two as one: Michigan-Huron. Hydrologically speaking, they have the same mean water level.

All of the other four Great Lakes – plus three more the size of Lake Erie – would fit inside Lake Superior. Experts say there’s enough water in Superior – some three quadrillion gallons – to submerge all of North and South America in roughly a foot of water.

The Buoys of Summer

Coast Guard crews have placed buoys at select locations across the Great Lakes to provide users with near-real-time weather, wave and water-quality conditions. A check earlier this week found surface-water temperatures ranging from a low of 50 degrees at Copper Harbor in Lake Superior, to a high of 71 degrees in southern Green Bay. Average highs across much of Lake Michigan were in the low 60s.

You can either check a website for the information or text a buoy directly to receive an immediate return text showing wind speed, water temperature, air temperature, wave height and more. Learn more about the Great Lakes Observing System’s buoy portal at glbuoys.glos.us.