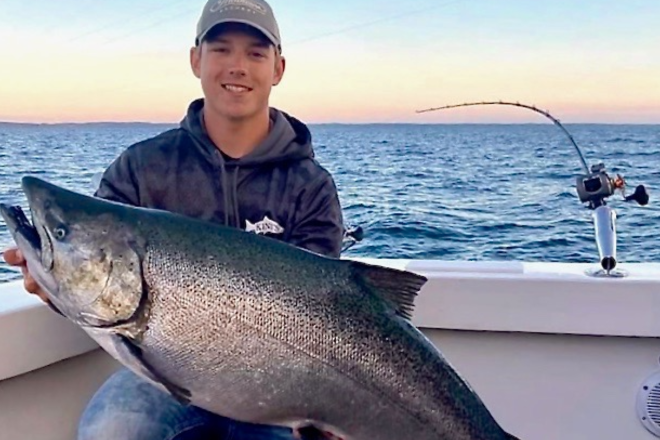 Carter Zimmerman of Algoma showed off a 40.40-pound Chinook salmon reeled in by a customer a week after the Kewaunee/Door County Salmon Tournament this summer. It’s thought to be the heaviest on the Wisconsin side of the lake in nearly three decades. Photo courtesy of Kinn’s Sport Fishing.

A proposed 54% increase in Chinook (king) salmon stocking by the Michigan Department of Natural Resources (MDNR) next spring has Great Lakes anglers talking this week.

Although it’s not final, the MDNR’s plan to stock 1 million kings a year follows decades of stocking cuts in Michigan due to data showing that more than half of the salmon hooked in the lake were produced in the wild.

A combination of stocking cuts by all four states surrounding the lake and an increasing number of alewives – the favored forage of salmon and trout on Lake Michigan – has led to more trophy catches in recent years, including a Michigan-state-record Chinook last summer and the first 40-pound salmon in nearly three decades here this July.

Nick Legler of Sturgeon Bay, the Wisconsin Department of Natural Resource’s (DNR) northern Lake Michigan fisheries team supervisor, said the agency was aware of Michigan’s proposal before it was announced earlier this week.

“I would say it’s not going to directly impact our decision,” Legler said. “There are many complex factors to consider.”

Among those, he said, are data on alewife biomass, Chinook salmon weights, predator-to-prey ratio, estimates of wild-fish year classes, and stakeholder feedback.

Anglers and anyone else who wants to share opinions on what they’d like to see in the 2023-25 Wisconsin salmon- and trout-stocking plan for Lake Michigan have until Oct. 1 to comment. Find the link, along with presentations from a recent meeting, at dnr.wisconsin.gov/topic/Fishing/lakemichigan/LakeMichiganSalmonandTroutMeetings.html.

Another public meeting – with in-person and Zoom options like the first one held Aug. 30 – will be held early next month. A final decision is set for November.

Legler said the DNR has a hatchery goal for Chinook eggs again this year, but it may collect even more in case there’s an issue with survival, such as occurred last fall. That resulted in the agency falling short of its stocking goal this spring. In an effort to make up for the shortfall, the DNR plans to stock hundreds of thousands of additional steelhead (rainbow trout) this fall.

Meanwhile, the MDNR’s Lake Michigan basin coordinator, Jay Wesley, said that although the alewife biomass is a fraction of what it was decades ago, fisheries surveys have shown a strong 2021 year class of alewives, along with five other year classes.

The Wisconsin DNR is seeking comment on a proposed rule that would require daily electronic harvest reporting for all Lake Michigan and Lake Superior charter fishers. It would replace the current paper reporting system, potentially improving accuracy and providing real-time harvest data.

The Wisconsin DNR will accept written comments on the proposed rule until Sept. 19, 11:59 pm, via email to [email protected].

Need a spot to hunt? Learn about public-land hunting and get tips on accessing private land during a free, online webinar Sept. 21, 7 pm.

The DNR – in partnership with the National Wild Turkey Federation, Pheasants Forever and Becoming an Outdoorswoman – is running the event, which is the third in a series designed for those who are interested in learning about hunting, fishing and trapping.

Following a brief presentation and panel discussion, the audience will have opportunities to ask questions. The webinar will also be recorded and available for viewing anytime on YouTube. The link to watch is youtube.com/watch?v=iT3j1aG0jDA.

“The adventure is rewarding for the same reasons that it is difficult,” Pritzl said.

As always, the DNR is reminding anyone who uses public lands to be respectful of others. Hunters should have backup plans to keep them afield in the event that they overlap with another hunter.

To get more information about hunting on public lands in Wisconsin, visit dnr.wisconsin.gov/topic/lands.

The Stevens Point team of Jay Przekurat and Dylan Minch won the top prize, worth $3,000, with 22 pounds, 8 ounces.

Steve Nooyen of Sturgeon Bay and Neil Vandervest of Oneida were third with 21-09, and Adam Neu of Sturgeon Bay was part of the sixth-place team with 20-02. Neu won $1,500 for big bass at four pounds, 15 ounces.

Though still eight inches above the 100-year average, Lake Michigan water levels as of Sept. 9 were down four inches from early August, nine inches from last September and 26 inches below the monthly record. Heavy rains in the basin earlier this week, however – two to three inches here and more than seven inches in southern counties – could mean a big change this week.