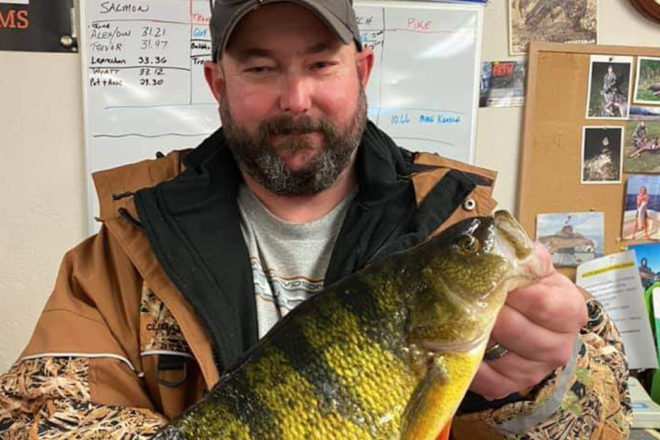 Tyler Woodgate recently weighed this trophy, 2.1-pound yellow perch at Howie’s Tackle in Sturgeon Bay. Some ice anglers are finding secluded spots to get out on thin ice. Others are waiting for colder air to firm up the offshore waters. Photo courtesy of Howie’s Tackle.

Gray wolves lost protections under the Endangered Species Act (ESA) Monday, offering lethal control options to states suffering losses of livestock, pets and wildlife. But a Wisconsin hunting and trapping season will happen in 2021 only if expected legal challenges from animal-activist organizations are unsuccessful.

“We’re prepared. We’ve managed wolves before,” said Keith Warnke, administrator of the Department of Natural Resources’ (DNR) Division of Fish, Wildlife and Parks. “We have a robust population, and we’ll be applying the best biological and social science in an extremely transparent process.”

State and tribal wildlife professionals have resumed responsibility for management, including an immediate ability to deal with wolf depredation.

DNR wildlife damage specialist Brad Koele said that when control was allowed between 2012 and 2014, most cases were reactive, such as issuing shooting permits to landowners and bringing in U.S. Department of Agriculture trappers. This time, Koele said proactive measures could be used on farms where livestock depredation has been going on for years.

“We haven’t done that before, but nonlethal control methods are failing,” Koele said.

The DNR announced a record population estimate of 1,034-1,057 wolves last winter: a 13 percent increase and three times larger than the state’s minimum goal. Using a new model, the agency said it was likely there were closer to 1,200 wolves at the time.

With at least 256 packs documented – 13 more than last year – the population could have surpassed 2,000 after new litters were born. Biologists say the population then declines throughout the year through various sources of mortality, including vehicle collisions, illegal killings, territorial disputes, disease, old age and starvation.

Joe Bragger, president of the Wisconsin Farm Bureau Federation, said too many wolves not only have an impact on deer and elk populations, but they also create a headache for livestock producers.

“We celebrate the successful recovery of the wolf in our region, but we also acknowledge the need to manage them at a healthy level to coexist in harmony,” Bragger said.

Former DNR Secretary George Meyer, who is retiring this year as executive director of the Wisconsin Wildlife Federation, said his group fully supports returning management of wolves to the DNR.

Speaking on Wisconsin Public Radio’s Larry Meiller Show, David Drake – a UW-Madison professor of forest and wildlife ecology – said that in his professional opinion, wolves were on the federal endangered-species list because of social, political and legal challenges to the ESA instead of biology and objective science.

“The wolf population should not have been on the endangered-species list,” Drake said. “It was there solely because of legal challenges.”

Door and Kewaunee County deer hunters and others interested in whitetails may comment now through Jan. 13 on proposed herd-size objectives for the next three years. Both County Deer Advisory Councils (CDACs) are recommending decreasing deer numbers.

Providing input takes only a few minutes, and participants may make additional comments. For example, it’s expected that there could be a push by Northern Door hunters to ask for the county to be divided north and south for management purposes. Learn more at dnr.wisconsin.gov/topic/Hunt/cdac. The direct link for online comments is research.net/r/FALL_CDAC_2020.

Following the public-comment period, each CDAC will meet later this month to consider public input and make final recommendations. The DNR will review final herd objectives and provide recommendations to the Natural Resources Board for approval Feb. 24.

Feeding seed and suet to help birds through the winter months is a popular pastime on the peninsula, but there are other things you can do to attract more feathered friends for a backyard visit.

Planting trees and shrubs in a way that offers more thermal cover, perches and hideouts near your feeding sites is optimal. If you’re short on habitat, recycling discarded Christmas trees this time of year is a great way to break the wind and offer some additional cover.

The simple act of providing fresh water will attract a great variety of birds. In our area, that means using an electric-heated dish or bird bath. You can use the type meant for pets or find bird-specific models that can be placed on deck railings or posts.

One of the most prolific wild turkey zones in the state, Zone 2, has fewer than 15,000 leftover spring permits available this year. That’s fewer than half the available permits in Zones 1 and 3, which have tags left in the last four time periods. Zone 2 has extras only in periods E and F, which begin very late this year: May 19 and May 26, respectively.

Leftover permits for Zone 2 will go on sale 10 am – midnight March 16, with a limit of one per customer. Any remaining after that will go on sale again beginning at 10 am March 20.

As of New Year’s Day, Lake Michigan was 32 inches above its 100-year monthly average, but down six inches from Jan. 1, 2020, and down two inches during the past month alone. Water levels were three inches below the previous high, set in 1987, and 61 inches above the monthly low, set in 2013.