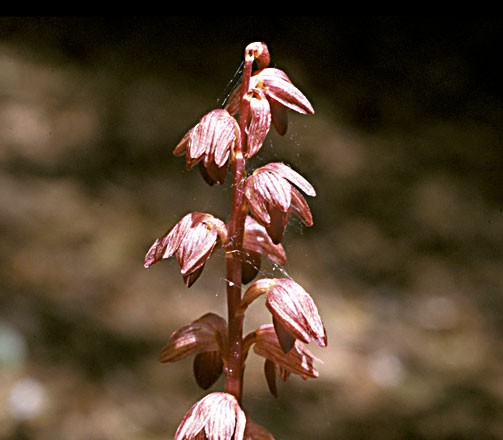 Treasure hunts aren’t just for little kids. Door County offers kids of all ages an opportunity to hunt for compelling treasures—hundreds of unique wildflowers. The prospect of seeing Blue-Eyed Grass or a Dragon’s Mouth or a Ram’s Head has lured many a couch potato outdoors on a personal treasure hunt. Numerous species of wildflowers are in glorious bloom in late May through early July, making it an ideal time to go searching.

Although a few wildflowers are exceedingly rare, Door County has more total species than any county in Wisconsin, so anyone willing to walk a little and look a lot is almost guaranteed to find something intriguing. There are a few rules of the hunt, however: stay on the trail, don’t trespass on private property, and most important—don’t pick or dig!

So lace up your hiking boots, grab a field guide (invaluable for identifying the flowers you locate), and hit the trail. As you plan your hunt, remember that where you hike will determine what flowers you see. Wildflowers don’t spring up haphazardly—each has a specific habitat in which it thrives.

A deciduous woods is a good place to start, and there you’re likely to find Big White Trillium. In late spring, this spectacular white flower carpets many of Door County’s forest floors. The flowers are often so large and grow so profusely that they resemble patches of snow in the woods. As the trillium blossoms age, they change from clear white to delicate pink.

Also growing in the woods, but more difficult to spot, are the peculiar green flowers of Solomon’s Seal. Keep an eye out for clusters of delicate bell-shaped flowers dangling beneath an arching stem. You may have to gently lift the plant’s leaves in order to see the flowers. The name comes from distinctive scars on the root that are said to look like King Solomon’s official seal.

You’ll need to be alert to discover Striped Coralroot poking up through dead leaves, but this peculiar-looking orchid is quite a find. It has striped, reddish-pink flowers arranged along an upright stalk—but no green leaves. It derives its nourishment from the dead and decaying roots of other plants and thus has no need to photosynthesize.

Wild Strawberry grows in sunny portions of the woods, at wood-edges, and in meadows. Five white petals and a yellow center make the flower easy to identify. The tiny red berries that appear later in summer are miniatures of cultivated strawberries but far sweeter.

As you work your way toward the edge of the woods and into nearby meadows, you may discover Wood Betony and Indian Paintbrush. With fernlike leaves and a cluster of yellowish hooded flowers, Wood Betony is distinctive. It’s often called Lousewort because of the mistaken belief that cattle grazing on it became lice-ridden. Indian Paintbrush catches the eye with its cluster of what appears to be brilliant red petals. Up close you can see that the “petals” are scarlet-tipped bracts (small leaves). They give the flower its name—it looks like a paintbrush dipped into red paint.

In mid-to-late June, you’re sure to encounter Wild Columbine, which grows along the edges of woods and in other semi-sunny places. Its five red and yellow petals curve gracefully upward, ending in closed spurs that have fancifully been described as looking like a ring of five doves. “Columbine” means “dove.” Wild Columbine was once suggested as America’s national wildflower, because the spurs look a bit like eagles’ talons.

Common Flax is among the many wildflowers that thrive in Door County’s open meadows. Drifts of this vivid blue flower spreading across a field provide a visual treat for a brief time in mid-June. Beauty is second to utility with flax, however. Fibers from its stems have been used since antiquity to make linen cloth, and oil from its seeds, known as linseed oil, is a component of oilcloth, linoleum, and paint.

Blue-Eyed Grass, a member of the Iris Family, also grows in meadows. Often nearly hidden by its grass-like foliage, the tiny, bright blue flowers have six petals surrounding a yellow “eye.” Look for this delicate little flower on sunny days, because it doesn’t open in cloudy weather.

A visit to a damp, evergreen forest, such as The Ridges Sanctuary, provides an opportunity to find many unusual varieties of wildflowers. In late spring, Dwarf Lake Iris, Gaywings, and Starflower spread out like a colorful carpet. Aptly named, Dwarf Lake Iris is a beautiful little iris, just three inches tall. Although it grows in profusion in the Ridges, it is a rare plant, found only in a few places in Wisconsin and Michigan and is listed as “threatened” by the Wisconsin Department of Natural Resources. Low-growing Gaywings has been described as looking like a miniature magenta airplane with a yellow propeller. Starflower is named for the seven-pointed star formed by its white petals. The flower is an anomaly in the plant world where few species have flower parts in multiples of seven.

Some plants grow in water, and bridges that cross water-filled swales in the Ridges provide an opportunity to see unique wildflowers that would otherwise require wading. The carnivorous Pitcher Plant sends up tall, umbrella-shaped maroon flowers in mid-to-late June. Its colorful, pitcher-shaped leaves hold water and give the plant its name. Insects, attracted by the leaves’ color, crawl in and can’t get out. Their bodies provide nourishment for the plant, which slowly digests them.

Other plants growing in or near water are Buckbean and Bog Rosemary. Buckbean’s blossoms look like frosty, white, five-pointed stars. Bog Rosemary has small pinkish, urn-shaped flowers. Its leaves look and smell like garden rosemary, but it is poisonous to both livestock and humans.

Finding a brightly-colored native orchid is a satisfying way to end a day of hunting for wildflowers, and with over 27 species, Door County is the ideal place to look. Although some orchids are tiny and rather drab, others, such as the brilliant pink Dragon’s Mouth, are spectacular. Two upright petals and a drooping lower petal give it the appearance of a fairy tale dragon’s head with its tongue hanging out. You’ll have to get your feet wet and dirty to see this beautiful orchid because it grows only in bogs, but it’s well worth messy shoes and a long trek.

Lady’s Slippers are Door County’s most familiar orchids. Named for their large, pouch-shaped flowers, four species grow in the county and each is exquisite. Rarest is the elegant little Ram’s Head Lady’s Slipper that blooms for a short time in early June. With a blossom the size of a fingertip, it is difficult to spot in its habitat of dark, damp woods. By contrast Yellow Lady’s Slipper blooms freely in woods and along roadsides during much of June. It is Door County’s official flower. Pink Moccasin and Showy Lady’s Slipper are less abundant, thanks to being favorite snacks for browsing deer. The large, pink and white flower of Showy Lady’s Slipper is unmistakable. Its scientific name means “queen,” because many believe it to be the most beautiful of all wildflowers.

Every wildflower is beautiful in its own way, however, and every flower has a story. Hunting for them can become addictive. Literally hundreds of species grow in Door County, and finding all of them could be a lifetime project. But no matter how many or how few you encounter, each identification brings a real sense of accomplishment. Happy hunting!