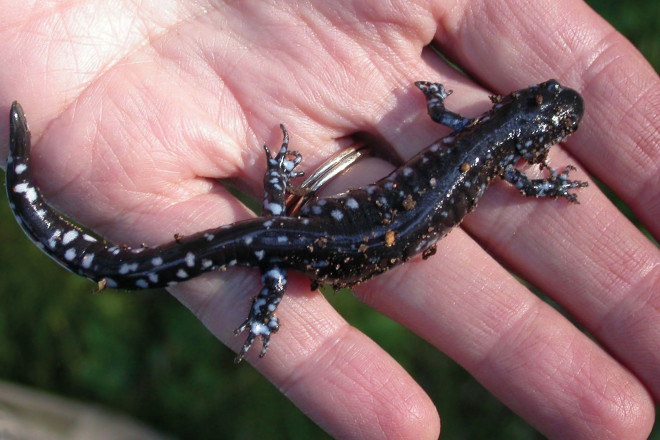 Wisconsin has cuesta (pronounced “kway-stah”) formed topography. A cuesta is a land elevation with a gentle slope on one side and a steep cliff on the other. Undoubtedly Wisconsin’s best known, understood and used cuesta is the entire landmass of Door County itself, stretching from the bay of Green Bay on the west to Lake Michigan on the east. The gentle slope of the county runs from the high bluffs bordering Green Bay eastward and downward to the shores of Lake Michigan. The steep cliff of the cuesta is what I prefer to call the Niagara Escarpment, rich with fascinating wildlife. 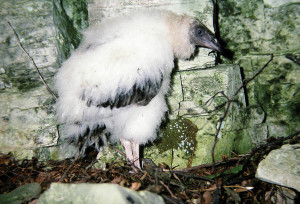 My first major introduction to the Niagara Escarpment was when I attended the “Door County and the Niagara Escarpment:  Foundations for the Future” conference held in Sturgeon Bay, Wisconsin on October 19, 1989, sponsored by the Wisconsin Academy of Sciences, Arts and Letters. Notable and experienced speakers included Ronald D. Stieglitz, Allan F. Schneider, Kenneth R. Bradbury, James H. Zimmerman, William H. Tishler, Robert W. Florence and Larry J. Smith. The entire landmass of Door County was referred to as the Niagara Escarpment. There was no mention by any of the speakers of wildlife associated with the escarpment.

The most recent and very informative Niagara Escarpment conference I attended was held at the University of Wisconsin-Green Bay (UWGB) on January 14, 2010. A thought-provoking statement was given by one of the presenters, Gary Fewless, botanist at UWGB. Speaking about the majestic and towering escarpment he said, “[People come] to stand on top of it and look at something else!” Another of his poignant comments was:  “Can we raise awareness and appreciation [of the escarpment] without destroying some of its unique features.” I was immediately reminded of May 12, 2006, the day I photographed the nest of Northern Ravens situated on a narrow ledge about 40 or so feet directly below the famous Sven’s Bluff Overlook at Peninsula State Park. All the while I photographed the two young ravens in the nest from a distance, tourists were standing against the railing directly above and admiring the awesome panoramic view, totally unaware of the birds’ presence. The scenic overlook is actually slightly cantilevered outward so one cannot see what is directly below. 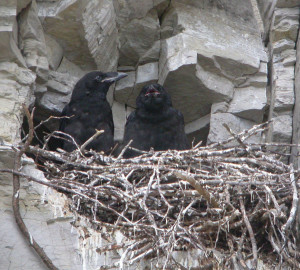 It was in August of 1989 that we were alerted to a strange-looking baby bird around 15 inches tall, unable to fly, perched on the trail close to the water directly below the steep escarpment at Little Sister Bay. It turned out to be a baby Turkey Vulture, proof of the first nesting of these carrion-eaters in the county. The nest was discovered the following day in a narrow crevice at the very top of the escarpment.

With fishing being of such high commercial and recreational value in the county, little thought is given to the value of the escarpment to the fish. Stand on the observation platform at the Ellison Bay Bluff County Park where one can clearly see how the narrow shoreline quickly falls off into deeper water. The top of the bluff at this park is roughly 180 feet above the water. It was Dr. Allan Schneider, professional geologist, who made the following comment at the 1989 Niagara Escarpment Conference:  “The full height of the escarpment cannot be seen, however, because the base of the escarpment is commonly concealed beneath the water. The floor of the Green Bay basin is generally 65 to 80 feet below water level; in some places it is 30 to 40 feet deeper. The total height of the escarpment, therefore, ranges from 200 to 300 feet. The character of the Green Bay shoreline is well displayed in many places, particularly in Peninsula State Park, at Ellison Bluff County Park, at Death’s Door County Park, and at Boyer Bluff on Washington Island.”

Dr. Bob Howe, Director of the Cofrin Center for Biodiversity at UWGB, in speaking about the escarpment at the Green Bay conference this past January, said, “Cliff faces and bases are very fragile. Much research is needed.” There are about 85 species of land snails in Wisconsin. Professor Jeff Nekola, formerly of UWGB, found 26 snail species at one site, most within three feet of the base of the escarpment. Prior to his study, one of these species had only been found in Scotland. Twelve of them are considered to be very rare and tend to be extremely small, like the size of a caraway seed. Six of the species are glacial relics – cool crevices of the escarpment mimic the Ice Age conditions where these 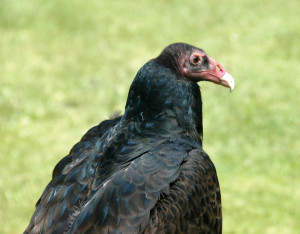 snails thrived. The richest snail fauna in the entire Great Lakes Region exists near the base of the Niagara Escarpment. While these tiny land snails are not a tourist attraction, they nevertheless constitute an important segment of the overall ecosystem of this outstanding land feature.

Salamanders, including the Blue-spotted and the Red-backed, are often found in proximity of the base of the escarpment. Also found there are the DeKay’s Snake and the Red-bellied Snake. Natural openings in the escarpment provide these reptiles with suitable wintering hibernacula. A snake more likely to be accidentally uncovered when moving small rocks in the woods bordering the very top of the escarpment is the rarely seen Ring-necked Snake.

The study of bats needs much more attention in light of problems they are experiencing. One of the largest bat hibernaculum in the Midwest is the Neda Mine State Natural Area near the southern end of the Niagara Escarpment. Four of the state’s seven bat species – the Big Brown, Little Brown, Northern Myotis and the Eastern Pipistrelle – hibernate in caves in the winter, quite common in the face of the escarpment. The smallest of all seven species, sometimes confused with a moth, is the Northern Myotis which should be receiving special study.

One of the six species of swallows that nest in Door County, the Rough-winged, frequently makes use of shallow crevices in the face of the escarpment for nesting. This Dusky-throated Swallow can frequently be seen, for example, at the Cave Point County Park south of Jacksonport on the Lake Michigan side of the peninsula. Here the 20-foot-high escarpment provides them with numerous nesting sites while the abundant insects flying over the water provide them with food. 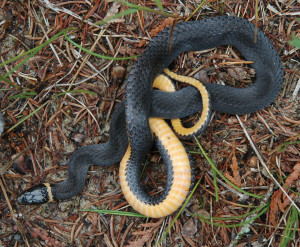 I was a member of a hiking group this past January which explored one of the Door County Land Trust’s properties, the White Cliff Fen. It was near the end of our trekking through the deep snow that we explored a small wetland at the base of the steep escarpment. Springs were keeping a portion of the water open allowing us to discover and examine the wintering forms of several aquatic insects on the surface of the clay-like marl. Undoubtedly, many similar miniature wetlands exist along the base of the steep incline and play vital roles in the overall ecology there.

Invaluable groups including The Nature Conservancy and the Door County Land Trust will continue to be of great importance in the preservation of the fascinating wildlife whose homes are on or near the great Niagara Escarpment. It is vital that we work to maintain healthy natural systems while, at the same time, meet the material needs and aspirations of an increasing number of people, all the while striving to maintain a balanced relationship between humans and the escarpment.