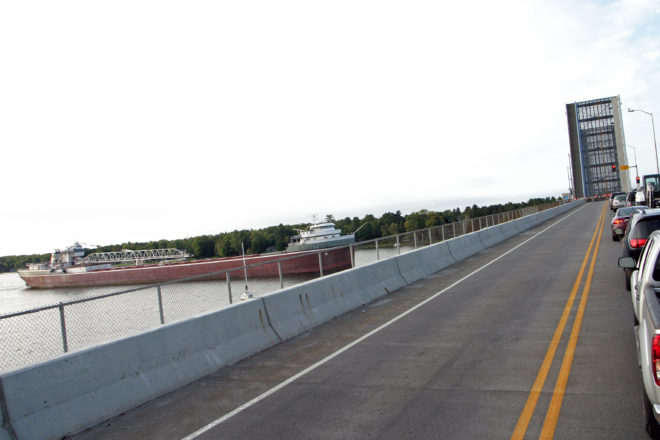 The storied Wilfred Sykes sailed into Sturgeon Bay at about 8 am on Sept. 19. When she was built by Inland Steel in 1949, the Wilfred Sykes had the distinction of being the first post-World War II American-built Great Lakes vessel, and at 678 feet long, was the longest boat on the Great Lakes at her launch. Many consider the Sykes to be the first of the modern lakers. She was named for the president of Inland Steel (1941-49). Her normal cargo is iron ore pellets. The Sykes is also known for having loaded up with taconite pellets in Superior, Wis., next to the Edmund Fitzgerald on Nov. 9, 1975. The Sykes left port two hours after the Fitzgerald, and predicting a major storm coming his way, the Sykes’ captain hugged the more protected northern shore of Lake Superior and found safe harbor at Thunder Bay, while the Fitzgerald went down in the storm the next day. According to boatnerd.com, the Wilfred Sykes was headed for Bay Shipbuilding for boiler work. Photo by Jim Lundstrom.