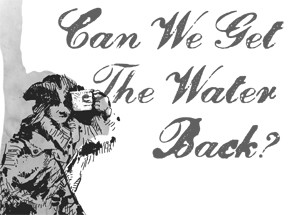 No single solution is going to fix our low lake level problem. We could build structures to slow water flowing from Lakes Michigan and Huron into Lake Erie, or dredge harbors again and again, but those would only bandage the gaping wound.

In order to truly address our low levels, we need to look at the issue from a variety of angles. We need to work together to slow climate change, organize across states and countries, write strong legislation to protect the resource from further threats and support the people and industries who need help in the meantime.

Keep reading to see ways we can work to get the water back.

Focus on the Cause – Climate Change

Since the dominant cause of the dropping lake levels is a changing climate caused by greenhouse gas pollution, cutting that pollution should be our first priority. And while it’s important for everyone to reduce their individual fossil fuel emissions, turning off the lights just isn’t enough. We need major change.

Climate Change: A Scientific Assessment for the Global Environment Facility, a study done Nov. 2012, found that we’re well on our way to the tipping point of climate change. The report said the maximum global temperature increase should be limited to less than two degrees Celsius, and we’re projected to reach that by the 2030s.

The climate change study calls for improving energy efficiency and cutting pollution across all industries and across the world. We need to reduce fossil fuel use and greenhouse gas emissions by 30 to 50 percent in order to protect our natural resources.

Individuals can cut greenhouse gas emissions by limiting electricity use, avoiding driving, and buying products made closer to home. They can also contact politicians, lobbyists and manufacturers and urge them to create policies that cut emissions on larger scales.

Organize Across the Basin

Low lake levels affect everyone in the Great Lakes basin, so addressing the problem has to be done on a regional scale. There are plenty of Great Lakes groups, from industrial shipping organizations like the Great Lakes Maritime Taskforce, to environmental advocates like the Nature Conservancy, to political advisors like the International Joint Commission (IJC), all concerned about low lake levels. 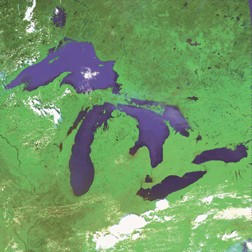 The IJC, a group that helps the U.S. and Canadian governments make decisions about the shared Great Lakes resource, had a group of scientists study the low water levels on Lakes Michigan and Huron.

The study addressed whether it would be practical to build a structure, like a dam, underwater turbine or gate, in the St. Clair River to regulate the amount of water that flows out of Lakes Michigan and Huron and into Lake Erie.

But scientists said the costs of building a structure to control the flow of water between the lakes aren’t worth it. While the structures would help low water scenarios on Lakes Michigan and Huron, most could cause flooding or other problems if the water levels rose again on their own. Many of the structures would also cause navigation issues and hurt lake sturgeon habitat.

And, the proposed options would all present an uncomfortable question – which Great Lakes get the water?

But that’s not a satisfactory answer for many thirsting for water back on their shores. Organizations like the Great Lakes & St. Lawrence Cities Initiative advocate for ecological protection of the lakes and economic protection of the cities around them. The group is made of 96 mayors around the basin whose cities rely on the lakes’ health.

“As mayors of 96 cities in the United States and Canada along the Great Lakes and St. Lawrence with over 16 million citizens, we are living with the effects of these low water levels on a daily basis. We ask that you engage the full authority of your offices to find near, mid, and long term solutions to this problem. Although the International Joint Commission has conducted extensive studies and come up with some recommendations, the situation has deteriorated, especially in Georgian Bay, and needs prompt action.” 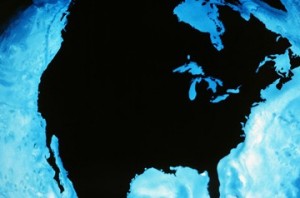 This backlit photograph of the National Geographic Society’s world globe highlights the Great Lakes in all their freshwater glory. Photo: D. Norton, courtesy of the Great Lakes Environmental Research Laboratory.

David Ullrich, executive director of the Great Lakes & St. Lawrence Cities Initiative, wants to draw more national attention to the issues low Great Lakes water levels have caused and could cause if they keep getting lower.

Attention isn’t all Ullrich wants. He also wants the IJC to reconsider its decision on the St. Clair River and look again at the possibility of building a structure to regulate the amount of water in Lakes Michigan and Huron.

The IJC’s concern about starting fights over water isn’t an adequate reason to not build a structure, Ullrich said.

“I think this is one of the primary reasons the IJC exists,” Ullrich said. “Controlling the flows and levels is part of the responsibility, and there are some tough decisions to be made, but that’s not a reason for not looking into it more.”

Get Aggressive on Great Lakes Protection

The more the Great Lakes drop, the more obvious their value becomes. We should focus on protecting them from future threats with stronger regional legislation.

The Great Lakes Water Quality Agreement was first signed in 1972, then updated in 2012 with measures to address threats like aquatic invasive species, habitat degradation and the effects of climate change.

The Great Lakes Compact says states will cooperate to best utilize and protect the basin, while balancing the needs of industrial, residential, agricultural, recreational and other groups that use the resource. The compact also sets up a commission of delegates from the states to follow through on the promises made by the compact.

While both documents are good efforts, they need to be more specific. They should set limits on phosphorus runoff rather than just recognizing the need to reduce them, and outline how the region will address climate change rather than acknowledge it’s a threat.

Getting the public involved and watching out for Great Lakes health will help, too. People who live along the lakes are directly affected by the lakes’ health, and know more than politicians tucked away in state and national capitols. Basin residents should speak up if they see changes in their local ecosystem – like dead birds on the beach or lots of algae – in order to start fixing a problem before it’s too late.

Even if we began to seriously organize across the basin and address climate change, the lakes will stay low for the immediate future. Municipalities are left to deal with low water the only way they know how – dredge. Dredging removes material from the bottom of a lake or river in order to make more room for boats to get by.

But dredging is expensive. While more ports and marinas need to be dredged because of the Lake Michigan water level, there’s more competition for the money available.

The commercial shipping companies that use those channels pay a Harbor Maintenance Tax. The tax is meant to be deposited in the Harbor Maintenance Trust Fund and used for dredging and other upkeep. Instead, that money has been funneled into the country’s general fund to reduce the national deficit.

But those bills would just help fund dredging for big ports. Smaller harbors are looking for help, too.

Some state help is available for municipalities paying to dredge their harbors. The Department of Transportation’s Harbor Assistance Program helps communities on the Great Lakes and Mississippi River maintain waterborne commerce.

Whether or not much state help is available, many harbors in Door County and around the basin will be forced to scrape together cash to stay open.

“It’s a really big issue, particularly in Door County where my experience is that the impacts of the low lake levels are very evident,” Friis said. “The shoreline’s getting broader and broader and I’m seeing people’s piers going out further and further.”