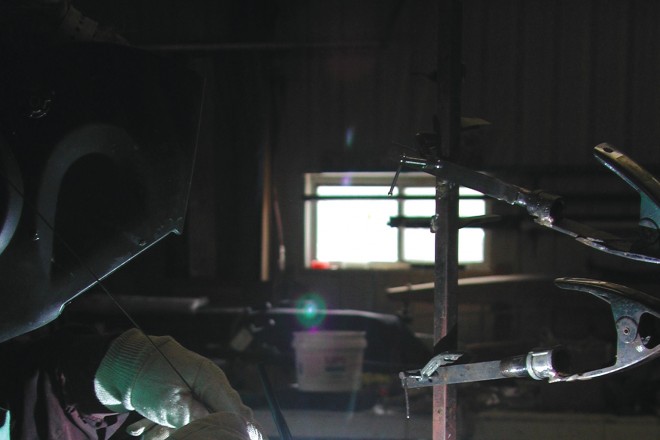 How does a hobby evolve into a passion, and a passion into a career? You might ask William Jauquet, who began in 1978 as a “rural folk woodcarver” and whose career has evolved over the years to encompass a worldwide audience for his bronze castings. His fame travels far and wide, and yet his feet remain firmly rooted in the Northeastern Wisconsin area that he calls home.

I recently had a chance to sit down with Bill at Edgewood Orchard Galleries, where he has exhibited his sculptures for over 20 years. At first meeting, it is easy to overlook the fact that this jovial, easygoing man is a bronze sculptor of considerable fame, having exhibited work in over 40 galleries from Aspen to New York, San Francisco to Chicago, Milwaukee to Santa Fe, and almost everywhere in between. It is only after conversation that he reveals himself to be the accomplished, exceptionally talented artist that he is.

Bill was born and raised in Green Bay, and had a successful career in real estate while his wife, Kathy, owned and operated several antique stores. In between busy careers and raising three children, they also raised horses on an old farm. In 1978, Kathy asked Bill, who had been an art hobbyist stretching back to high school, to carve a decoration for her antique shop. So he took some of the extra hand-hewn barn beams that they had in their horse barn and carved a three-foot tall swan in the folk art style. Much to his surprise, it sold quickly.

“I never expected it to sell,” Bill recalls, “but I had so much fun carving that I decided to keep going.” So Bill began doing small art shows, selling a few pieces here and there, until he decided in 1980 to make creating art a full-time career. In the early 1980s, Bill created hundreds of woodcarvings, mostly of animals such as horses, cows and pigs. He soon gained national attention when the Gillman Gallery in Chicago became the first gallery to carry his work.

In 1985 Bill’s career took another leap forward. He was honored with a one-person show at the Museum of American Folk Art in New York. That same year, fate brought Bill a 10-page photo spread of his art in Better Homes and Gardens Magazine Country Edition. The calls, letters, and commissions that came from these events soon expanded his audience into a worldwide following.

It was also in 1985 that Bill began to transition his art from woodcarving to bronze casting. Mac Gillman of the Gillman Gallery suggested that Bill try working in bronze, and so Bill began experimenting with the “lost wax method.”

The “lost wax method” is quite a time consuming process. First the artist uses hard wax to sculpt a figure. Then, the wax figure is cut into sections small enough to fit in a kiln. The sections are then invested in plaster to create a ceramic shell and cured in the kiln until the wax melts out of the shell. Once the wax has melted away (thus the term “lost wax method”) molten bronze is poured into the ceramic shell and left to cool. The ceramic shell is then painstakingly chipped away, and the raw bronze casting is revealed. From there, the bronze pieces are ready to be welded together, sandblasted, and the surface of the bronze is patinaed, a process using chemicals and heat to achieve a distinctive finish. Finally, the piece of art is polished with a coat of hot wax.

Bill’s initial attempts with this method were so successful that he began creating limited editions of his work. In 1986 and 1987 he produced mostly these limited editions, almost all of them were horses. “I must have done over 500 horses,” Bill laughs. “I loved the learning process, the evolution of working with bronze. I’m still learning.” Eventually, Bill found that his love of bronze casting eclipsed that of woodcarving, and over the years has given up woodcarving all together in favor of perfecting his art in bronze. He has also branched out from creating sculptures of animals into more figurative work, and from there has been applying bronze sculptures to mirror frames and wooden boxes.

Even in those early years of bronze casting, Bill did all his own patina work on his bronze sculptures, which is quite rare for bronze casting artists. “Patinas are part art, part science,” Bill explains. “There are so many variables, including the mix of the chemicals, the length of time, and the exposure of sunlight – all these factors and more can affect how a patina evolves. No two are ever alike.”

In 2003, Bill began a venture that is even more unique in the world of bronze casting, creating his own foundry in his home in De Pere. While some of the large-scale pieces he creates, such as a six-foot tall horse that stands in the courtyard of Edgewood Orchard Galleries, still must be cast at a foundry in Madison, his “Studio Bronzes” are all one-of-a-kind pieces crafted right in his own workshop. Over the years, he has made many refinements to his process, including using his own blend of wax, and utilizing a sophisticated vacuum casting process to ensure his bronze pieces come out exceptionally smooth.

Unlike some artists with a pronounced point of view, Bill insists that he creates solely for the sake of creating and for the joy it gives him and others. “I make things that I hope are pleasing to the eye, things that look good,” Bill laughs. “And my goal is to sell them so I can keep making more!” He insists there is no profound theme, no explicit message found in his work.

Despite his modesty, there is a definite connective thread that seems to run through his one-of-a-kind sculptures. Looking at his works, you get a sense of exuberance and celebration, a feeling of the heightened emotions of his subjects as displayed by their reaching, stretching forms. His human figures leap and dance through space as their arching forms balance in what sometimes seems like midair. His animals, particularly the horses, have a stately, graceful animation. The eye is drawn not only to the superb craftsmanship evident in each piece, but to the life of the subject. Bill draws inspiration from the energy of the animals and people he portrays. Angels and Indians, dancers and musicians, horses and other animals all inspire him to create works of art whose life itself seems to spill out from the bronze.

Although Bill focuses his time and energy on bronze casting, the art of woodcarving is alive and well in the Jauquet family. Bill’s son, Chris, began helping his father in his workshop in the 1980s, and has since begun transforming his own woodcarving hobby into a part-time business. 2007 marks Chris Jauquet’s debut at Edgewood Orchard Galleries. In addition to his full-time job in computer graphics, Chris finds time to create stunning woodcarvings of giraffes, horses, pigs, swans and other shore birds.

After 27 years in art, Bill is content to savor the slower lifestyle of Door County, and concentrate on work for his “gallery home,” Edgewood Orchard Galleries. With five grandchildren and hobbies like fishing and golfing, Bill still devotes much time to his art but finds time for leisure pursuits as well. “I have always worked hard, and now I am taking time to play hard as well,” Bill smiles. “But the energy to keep working is always there. I want to create art that makes people happy.”