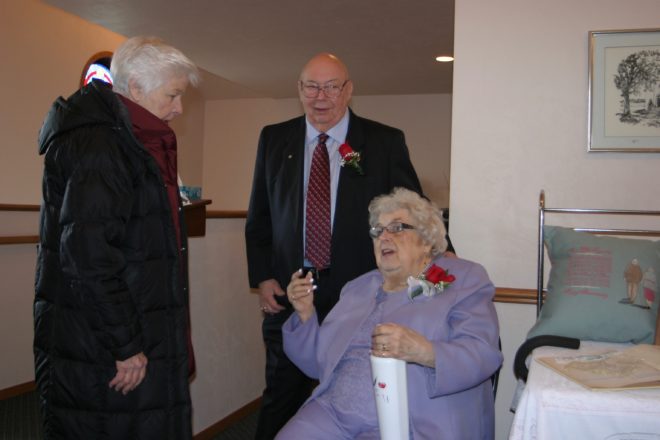 Zion United Methodist Church was buzzing with good cheer and geniality on April 14 as friends of Patty and Howard Williamson stopped by to celebrate the couple’s 65 years of marriage.

The Missouri natives have called Door County their summer home for three decades and have made many friends through their community involvement. Among their many associations, Howard has long served as a substitute teacher at Gibraltar, and Patty is a feature writer for the Peninsula Pulse and Door County Living.

Asked for advice on how to maintain a marriage for 65 years, Howard recalled a discussion he had with a couple of Gibraltar students five years ago. They were going to prom together and asked Howard for advice on what to do before and after prom.

“I said, ‘The best thing to do is always do what your girlfriend or wife says. No matter what it is, you’ll be better off,’” Howard said. “At that time, I said, ‘I’ve done that for 60 years.’ The girl said, ‘You mean you’ve been married 60 years?’ ‘Yes, I have,’ I said. She said, ‘I don’t even know anybody who’s 60 years old.’ But I’ve always done what I was asked to do, and that’s why we’ve got 65 years. [Patty] has probably saved me more times than I can think of – knowing the right thing to do – even though I didn’t think it was at the time.”

Patty recalled that they were eight when they first met at a faculty back-to-school picnic. Her mother was the first-grade teacher, and Howard’s father was the high school principal and football coach.

“It was a rainy day, so the picnic was inside the high school, and there were a bunch of faculty kids and school board kids,” she said. “Somehow Howard locked me in a closet. My mother was not too thrilled about that.”

They started dating when Patty was 15 and Howard had just learned how to drive.

“We dated a little more than four years,” she said. “We graduated from high school together. Went to Mizzou [the University of Missouri] together. That spring he was in ROTC, and this was the Korean War in the early ’50s – a good chance he’d be drafted. We decided we knew one another really well, and so we got married.”

Asked for her advice on maintaining a marriage, Patty said, “I don’t know about everybody, but we got married, and we just assumed it would last. We just always got along. I think we had the same values in life, and we expected to stay married. We had three kids. Never had much money in the beginning. We didn’t have all those expectations. We didn’t expect to start out with new furniture and appliances. We acquired those. Family has meant a lot to both of us. It’s been a good ride.”