At the farm of my childhood we had an outhouse, after that standard period of child apprehension of what creatures might live, crawl and slither under an outhouse, a kid makes peace with the demon potential of the world. In this case the outhouse pit. This is altogether a good life lesson: a dark city street is not near so scary if you’ve once confronted and dealt with the outhouse monster.

All of whose imaginations would have been made better if outhouses had a decent window. Seldom is, or was, there an outhouse with anything like a panoramic view of the world. Instead some high-on-the-wall miniature-brick window that wasn’t generous with photons. The already dim confines of that chamber rendered even darker.

All this is good training in the fear management sector because the kid learns to leave the door open, and not so tied up with the privacy gig.

The experience is habit-forming, the kid makes peace with the function and windows. 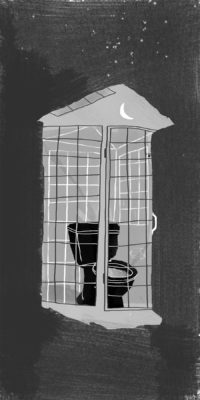 In my father-in-law’s house there were three bathrooms, one downstairs, two upstairs. As a standard-issue farmkid I thought this extravagant. I have since learned that America and American life is one extravagant function after another. Kitchens come with every possible convenience, tool, chopping block, granite countertop, microwave, emulsifier, atom smasher, and we eat fast food. There are bathrooms in America with more square feet than Lincoln’s cabin, some beat out Monticello. That strikes me as a lot of latitude for the function, what once took place in a dark two-holer. Yet to explain…the two-holer. Meaning tandem, double occupancy, team-sport outhouse. This suggests those were real friendly people, real comfortable people. I was blood related to people with very noisy bowels, whose digestion was a public event. They were less biological than geological including puffs, bangs and whistles. I think occasionally actual smoke happened.

As I was saying, in my father-in-law’s house were three bathrooms, not a window in any. When I built my house, my father-in-law came to help, on a Saturday he installed windows. When he got to the end he said, which of the rooms is the bathroom, because they all had windows, big windows. He couldn’t imagine a bathroom as having a regular size window. He looked at me strangely, as if I just admitted having sex with chickens, something far-fetched, maybe clams is a better choice.

I told him I didn’t have a problem with windows in the restroom, besides it gives you something to look at. You’re supposed to read, he said.

The array of birdfeeders in front of my house is outside the bathroom window. Four feeders, suet, corn, sunflower, thistle, cob corn, a third suet. At any daylight moment there is a bird if not a dozen on those feeders, another dozen waiting in line on the juniper, sparrows, house finches, golden finches, jays, an occasional shrike, juncos, chicks, downy, hairy, red-head, rose breasted, cardinal, flicker, robins, mourning dove. There is such a thing as the blue jay hour, also the mourning dove hour. As Leopold observed, all attend their hour and lumen. I like the way sparrows line up on the bough, so evenly spaced, such orderly birds. There is a certain sound when mourning doves alight and I am mindful that a bird-feeder is a miniature version of Congress, variable feathers, lots of me-firsters, proud colorations. I particularly like the cleanup birds, who thrive on the scatterings, the debris, who’d rather not bicker.

None of this would I know unless I was sitting down and at peace for a moment. This I attribute to the windows.