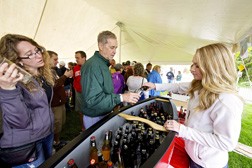 “Really?” I thought when I saw Golden Knot and Crimson Crossing being offered at the Door County Beer Fest held on June 15.

Perhaps you haven’t heard of the strange pairings of chardonnay and merlot, respectively, with wheat ale. They are a product of the Blue Moon Brewing Co., which is part of Tenth and Blake Brewing Co., the craft and import division of MillerCoors.

Well, beer fests are all about trying brews you’ve not had before, so I had to sample what seemed to me the most ridiculous beverage I’ve seen at a beer fest, and, surprise, I liked the pairing, especially the Crimson Knot chardonnay/wheat. Finally, wine with some life to it!

I noticed one corner of the main tent was a hub of activity. Checking it out, it was easy to see why: One server was doling out both the delicious New Holland’s Dragon’s Milk Imperial Stout and Southern Tier Brewing’s equally delicious Crème Brulee. Yum!

However, it reminded me that not everyone understands beer fest etiquette. When you receive your pour, move away from the table and let the next taster in. Don’t stand there conversing and blocking others from trying the beer otherwise the cattle prod might have to come out. 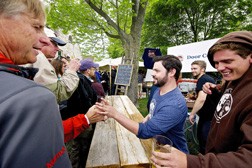 In a section all to themselves, the new Door County Brewing Co. was garnering a lot of attention and people started appearing in the cool Polka King Porter sweatshirt.

Jeanne and Joe Majeski of Door Peninsula Hops were also attracting a lot of attention with a bowl of fresh hops and two potted hop plants. We’ll be doing more on their business in the near future.

Shipwrecked of Egg Harbor was also in attendance with several tasty beers, including its summery Kolsch, which will go on tap at the pub as soon as someone empties the Lighthouse Light keg (would someone please do that, soon?). 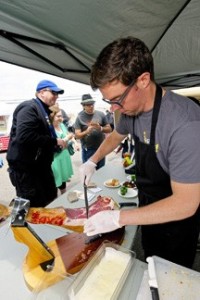 I also attended the VIP beer and cheese pairing that preceded the fest. The cheese and beer pairings looked and sounded great as described by cheesemakers Marieke Penterman of Holland’s Family cheese in Thorp, Wis., Chris Roelli of Roelli’s Cheese Haus in Shullsburg, Wis., Sara Hill of the Wisconsin Milk Marketing Board and the very enthusiastic Cliff Kaplan of Beechwood Distributors, but 11 am is just too early for me to start drinking beer, so I watched as the 50 or so VIP folks tasted Penterman’s award-winning gouda with Bos Wildflower Mead from Madison and her fenugreek gouda with Central Water’s Barleywine, and Roelli’s blue-veined Red Rock cheddar with Geneva Lakes Amber or the Carr Valley Casa Bolo with Central Waters Exodus Sour Ale (this is one I really regret missing for sour ales are one of the great pleasures in life, but, again, just too early for my taste buds).

The food vendors were also a great part of the day, from the bacon-wrapped dates from Parador to the pulled pork sliders and whitefish chowder from The Cookery to the cherry tarts from the Northern Door Rotary. Never got around to the pretzel bun brat or the many other tasty morsels provided by a variety of vendors, but it all looked and smelled fantastic.

I heard a lot of great information at the VIP event and from the servers dispensing beer throughout the day, and that, ultimately, is the mark of a great beer fest.