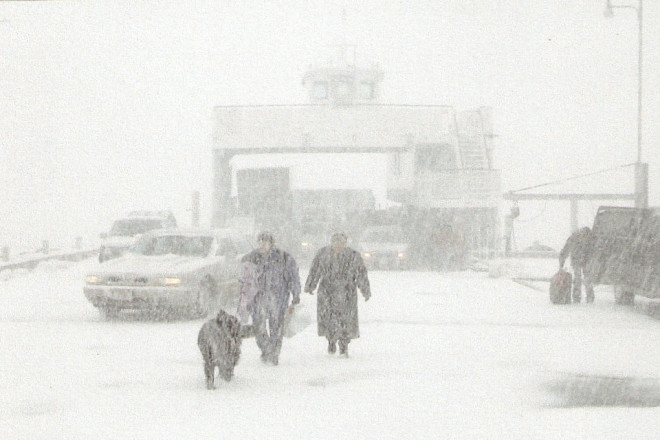 Join me, if you will, on a winter’s day on Washington Island.

It happens to be a Tuesday morning in mid-January. It is early, barely daylight, and the town’s plow just made its first pass on Main Road. Snow wasn’t heavy last night, only three or four inches, but the island plows will clear the roads so that drivers can go safely about their day. 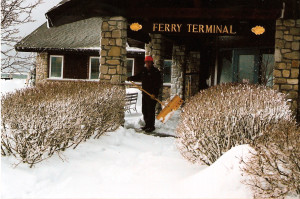 Washington Island’s downtown is anchored on the north end by Mann’s Store and to the south by the brick Verizon phone exchange. This half-mile of commerce between these two points comprises a modest but noble town within the island township, called “up the road.”

Mann’s Store is presently the island’s only grocery, having been operated by the Mann family since 1903. Lights went on at 6:30 am because Jerry and Orion Mann are stocking shelves and preparing for the day’s shoppers. Their grocery supply truck brings in fresh produce, poultry and meats, and other grocery items from their mainland supplier on Monday and Thursday mornings. Shopping after the truck’s arrival assures the best selection of goods.

It is a hard thing to run a small business on an island with a population of 700, where customers will need and often demand the variety found in the large stores of mainland cities. Through winter, essential services for the small number of residents must be balanced with a population that may expand to four times that in summer. Those who have been in business here for many years have adapted to the sharp swings in seasonal activity. 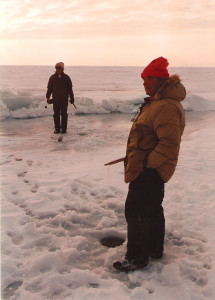 Soon, the island’s school bus will head south and deposit students at the school’s front door, also on Main Road. This is Wisconsin’s smallest school district, 75 students in all, kindergarten through 12th grade. This will not be a “snow day.” With its short bus route and excellent town plowing service, snow days are rarely called. Today, high school classrooms will be short a few students, nearly empty maybe, as the boy’s basketball team heads off-island for a game against a small private school. Basketball is one of the few interscholastic winter activities for island students.

Next door to school is the Island Community Center. Lights are on at the town offices and the island clinic. Dr. Wilson, the island’s dentist from Sister Bay, will have appointments after his commute on the morning ferry from Northport. At the Rec Center, located east of the Community Center, early morning swimmers are counting their pool laps, while others exercise and run on the treadmill.

Cars with headlights still on trek south toward the ferry dock to get in line for the 8:00 am departure, the first of two daily trips in winter. A few drivers have stopped at KK Fiske restaurant, some at Red Cup Coffee, and others at the Danish Mill for coffee, bakery, breakfast and conversation.

The ferry line’s mail van typically arrives at the loading dock in the rear of the post office by 7:40 am. There, Postmaster Dick Jepsen sorts and bundles outgoing mail in between waiting on customers with packages. The contents of outgoing boxes include warm-weather garments on their way to Florida where their owners will have them available for a few months before shipping them north again in spring. The island’s incoming daily mail volume is enough, typically, to fill the back of a mini-van. 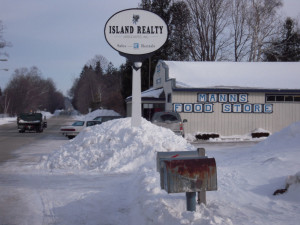 But the morning is still early, and so far only a few pairs of tire tracks have made imprints since the plow passed, and those sets might belong to ferry crew headed out to shovel snow from decks and ramps, check the engines, and break up ice in the slip in preparation for the 8:00 am departure. When the last shovel of snow is tossed aside, the line of cars will move forward, a full load of 17 cars today plus the outgoing mail van. Round trips always begin from the island where shelter and secure harbor are found, and where the ferry employees live and the business office is located. The morning trip will take 40 minutes, despite large ice fields in Death’s Door. A few times each winter the ferry trip might be delayed or cancelled, but only on the very worst weather days when a storm rages or fields of ice slide quickly through the Door.

It is the Arni J. Richter’s heavy hull, powerful diesels, ice class propellers and experienced crew that enable this ferry to cross in nearly any condition winter presents from thick ice to blinding snowstorms to glistening, jewel-like crossings in zero temperatures. The Richter and its crew must hold their own in winter when no other vessels are available in the vicinity to help. 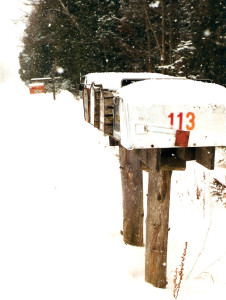 The passengers, for the most part, are accustomed to a winter ferry routine that usually includes icebreaking. In order to meet mainland appointments, they must make adequate allowance for the ferry ride and then an hour’s drive down the peninsula, where an icy highway can be equally as challenging as the ferry crossing. You either live on the island because it is your native home and choice wasn’t an option, or you have decided after careful consideration to make the island your home. The time spent on a ferry crossing the Door, waiting for a ferry, or heading toward a ferry – all in accordance with a set daily ferry schedule – is as much a part of island living as breathing island air.

Next door to the post office is the Red Cup where all morning long cars are parked along the road, their owners inside for steamy coffee, friendship, and discussion. Tavern life begins to stir around 11:00 am, approaching the noon lunch hour when soup and sandwiches are served and friends begin to gather. A mainland service repairman, day visitors, local tradesmen and retired islanders will stop in for a beer, lunch, and daily news. These four Main Road establishments become social centers, too.

News travels fast in small communities, and on the island it caroms off one shoreline, zooms back through town, then zips off toward the opposite end of the island, sometimes with the message altered, but it keeps moving with certain urgency. Who went in the ditch? Who is sick? What property was sold, and for how much? Is the new owner related to the island? What line of work is he in?

At Trinity Lutheran Church on Town Line Road this morning, 15 women are busy quilting. This communal activity has drawn gifted hands for many years in a weekly work session. Materials are cut, matched, assembled and sewn each Tuesday morning. Some days the quilting ladies, representing all island churches, arrive to find new rolls of cloth left by anonymous donors. While no goals are set, the 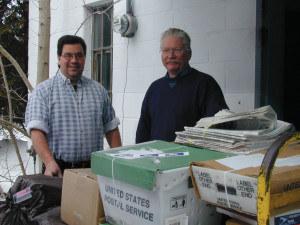 number of completed quilts generally ranges between 250 and 270. Some of these will be given to area homeless shelters, with the rest sent to Lutheran World Relief for distribution overseas.

Across the road from Trinity Church, the Stavkirke path is snowed over, and yet there are sets of visitor footprints. This chapel in the woods was built to Norwegian standards of 1150 A.D., the dawning of Christianity in the northern fjords, and it is always open, always available for meditation, and welcomes those who come to appreciate the beauty of ancient construction methods in a spiritual setting.

Down the slope from the church lies Lampert’s Home Center with building materials and Jim’s Island Repairs. Further down is Brothers Too with liquor, beverages, shoes, cigars, appliances, gift cards, storage rental space and the fix-it-in-a-jiffy spirit of brothers Mack and Jim Gunnlaugsson.

The morning melts into afternoon and the clouds are thinning. The 1:00 pm Arni J. Richter starts across the Door once again, this time with a few service repairmen and empty delivery trucks returning to the mainland along with dentist Dr. Wilson. On the return ferry a batch of UPS and FedEx parcels will be transported, along with tires, batteries and car parts from auto shops in Sturgeon Bay. 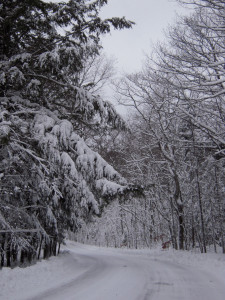 As the island workday comes to a close, and the late afternoon sky turns pinkish near Door Bluff, some workmen become fishermen. Along the island’s rugged western shore a stony beach narrows, then climbs 100 feet or more into a solid limestone bluff. A man tows a sleigh behind him on the ice, and when he’s a quarter-mile from shore where water depths drop to 30, 40, then 50 or more feet, he stops and drills a hole to jig for lawyers, a slippery bottom feeder and local delicacy. In the shallows of the harbors, other ice fishermen jig for perch inside small shanties.

Out on the ice it is quiet, with only an occasional groan from the shifting fields. This is an especially peaceful time of day, when winds often go slack with the setting sun. The night will be clear, star-filled, and cold.

Looking back at the distant tip of the peninsula is not the only way, but it is one of many island ways to find peace. From this winter vantage point in the Door, reflection is a plentiful commodity.