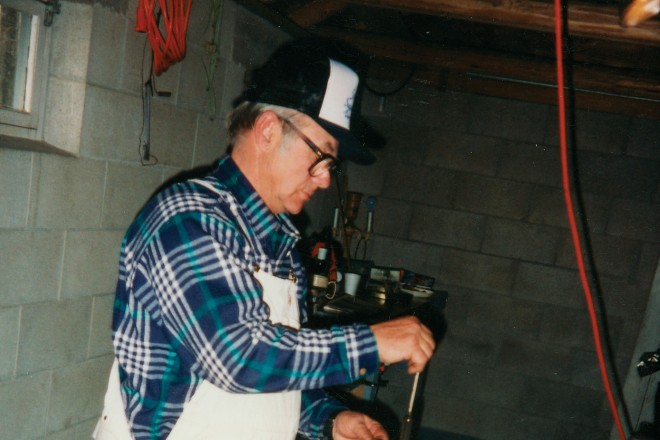 Every year toward the end of winter – during the months of February, March or April – the sap of the maple trees starts to flow and the process of making maple syrup begins. Here on the Door Peninsula the month of March typically signals when the weather conditions are perfect for sap harvesting. Though many types of maple trees can be used for making syrup, Sugar Maple trees produce the best sap and these are found readily around the county.

The telltale buckets on the side of a tree will appear for as long as the production season lasts. In order for the sap to flow, daytime temperatures must be above freezing and the temperature must fall below freezing at night. “Forty/Twenty” is the prime temperature range according to Evelyn Eckhardt, whose family has been producing syrup at the family sugar bush since before she was born. “Forty/Twenty means maximum temperatures in the forties during the day and that the thermometer must drop down into the twenties at night.” The thermometer must stay in this range or the syrup production will end for the season.

Once the trees begin to have leaf buds, the sap and the syrup it produces take on a bitter flavor, rendering the final product unpalatable. Evelyn’s father, Louis Sohns, calls this “buddy syrup.” Louis can tell when the sap is off just by how it smells. He has been producing maple syrup at the same family homestead since he was a boy. “I remember loading the sap I had collected into my little wagon and bringing it down the road to our neighbors, the Reinhard’s Sugar Shack, to boil it into syrup.” Buddy syrup can be boiled longer to produce a darker syrup used for commercial baking or sweetening, but won’t taste right on French toast.

The production of maple syrup begins with the tapping of the maple trees. Tapping a tree consists of drilling a hole a few inches deep in the trunk and inserting a spile, or spout, to drain the sap. Larger trees may be tapped in multiple locations, but a tree should not have a hole drilled in the same place twice. Though a maple tree will produce sap as long as it is alive, the natural healing process of the tree forms a barrier to protect itself and will not allow sap to flow from the same hole for more than one season.

Collection buckets are placed under the spouts and need to be emptied regularly. This traditional method has gone by the wayside in recent years due to advances in technology. In many of the high production areas of Canada, Vermont and Wisconsin, plastic tubing runs from the trees directly to collection bins or to the processing area, thus allowing for continuous sap collection and higher production yields. Here in Door County much of the maple sap produced at family sugar bushes is still collected by hand and, on a walk through the woods in syrup season, buckets can be spied on many maple trees.

To transform the raw sap into syrup, it must be boiled down or evaporated over high heat to reduce the water content and concentrate the natural sugar. The sap is clear when it exits the tree and does not take on the familiar amber hue of maple syrup until after it has begun to be boiled down. The sap is brought to the processing house, commonly known as a “Sugar Shack,” where it begins the conversion. In years past, stirring the sap in a large high-sided cauldron over an open fire was the most common evaporation process, but again modern technology has provided advances and many operations now use a wood-fired mechanical evaporator to process the sap.

Constant high heat over a long period of time is needed to produce the proper sugar concentration for pure maple syrup. In the final stage, the syrup must reach exactly 219.5 degrees Fahrenheit. If it goes higher the syrup will crystallize in the bottle. For Evelyn, fond memories from childhood are of long nights spent in the Sugar Shack with family members taking turns keeping the fire going and drinking Sap Tea, brewed using the secret family recipe.

Large amounts of raw sap are required as it takes approximately 40 gallons of sap to produce one gallon of syrup. A standardized grading system is used throughout the United States to ensure proper color and taste for pure maple syrup.

Pure Door County Maple Syrup from various local producers can be found at many of the farm markets and specialty stores throughout the county. During syrup season (roughly March through early April) a trip to Jorns’ Sugar Bush on County T will provide visitors an intimate look at the entire maple syrup making process. Though Door County is not often remembered for its maple syrup, discovering this tasty treat is sure to create a lasting memory.